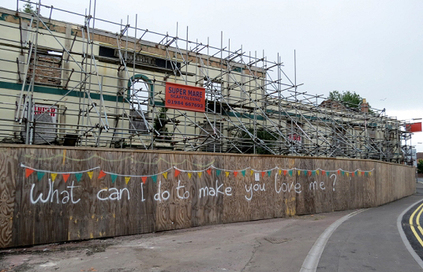 A long time ago I thought about creating a site focused on where I lived, keeping my identity secret. Not because I had anything particularly controversial to say, but because ultimately I wanted the freedom to cut through the politics and frustration inherent in living in Highbridge. Instead I figured I'd have the courage of my convinctions, and conceived the only half tongue-in-cheek Highbridge Psychogeographical Association as a vehicle for my ramblings. I've not used this part of the blog quite as frequently, or even exactly how I intended - real life, a dabbling in politics and other writing about things a world away from here all taking their toll on my drive to write about home. But just now, things aren't altogether great here. In short, there is a huge stunt being pulled somewhere and there are plenty of people who are working hard to dust over the tracks of those involved. Yes, this will sound like the paranoid ramblings of some sort of local lefty - but in this case at least, it's genuinely not. Some of these people who are content to have the public entirely excluded from this process selected me as their candidate a year or two back, because they knew damn well I understood localism and community development better than they did. I can only say I'm glad that circumstances conspired to prevent me standing for them.

The whole situation hinges on the wretched, unloved Highbridge Hotel once again. It's become an unwelcome bargaining chip in a bigger game which stretches right from the River Parrett shoreline to the meadows which sit alongside the River Brue. In a nutshell, the Planning Committee is being asked to consider an application for parts of the former boatyard site on the basis that the developer will provide flood defence improvements which will unlock the ability to build on the other sites. This huge commitment of cash will effectively exempt them from any Section 106 contribution for the more traditional issues such as schools, transport and so on. So, the Planning Committee is being asked to take a 'double or quits' style gamble. Give the go ahead to the Boatyard, get the sea defences for free, and bank on the 'unlocked' development sites providing the infrastructure for the whole set of separately developed sites. We now enter a sort of quantum world of chicken-and-egg causality. The defences are needed because of the development, but the development can't be built without them. The relationship of the defences to the rest of the site is far less clear, and indeed there is no easy way of considering them together. Right in the centre of this maelstrom sits the Hotel. Still collapsing, still shaming our sister town up the road, still echoing a community's growing disconnection from the democracy which represents it.

For starters this breaches all sorts of rules and regulations, and is technically illegal. When the Committee considers an application it is required to do so on the individual merits of the case, with some consideration of how it fits with the strategic plan for the area. And that is captured in the Local Development Framework. This captures how the Council thinks the whole district should develop over the coming years, and has been subject to a ton of expensive consultation too. But its been largely discarded in this case. So, we've got a bunch of officers who are reluctant to talk to the public because they fear reprisals for their inaction, a group of councillors who (save for a notable couple) are intent on getting the deal through to rid them of an issue and cement relationships with developers, and a population which - although divided on what should happen, are increasingly alarmed by what actually is (or indeed isn't) happening on the ground.

Sometime last week, the graffiti above appeared on the hotel, complete with painted jubilee bunting. Its innocent, childlike curves beg for an answer from those who have it in their power to offer it. Is a once proud build making a pathetic bid for it's own survival? Can you put a value on collective memory and shared ideas of space when they're pretty much all a community has to use as foundations for it's future? This simple message speaks louder and clearer than most others who've considered the Hotel site in recent times - and certainly improves on the planned, heavily corporately influenced plan to put a mural on the boards. The fate of the hotel, of the last historic building standing in the old centre of the town lies in the hands of a political gamble.

I only wish I had some confidence in the steadfastness of the players...