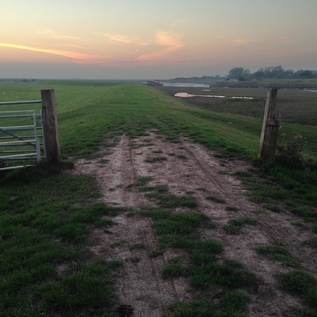 It's possible on a brisk autumn evening, when the car headlamps sparkle in the dusk, to feel uncharitable about writing a piece on my current, but soon-to-be former hometown. There's a bustle of evening traffic, and a steady run of people trudging home from the railway station - bringing a little life to the place which isn't always evident here at all. But reflecting on eight years of living here, which have been for me relatively calm and stable, is a tale of depressing inevitability which won't betray many surprises. I've wanted for a long time to write a 'state of the town' speech - a single summation of how a place full of character and potential has been ground down into a dusty insignificance over time. It's never seemed right to do this from within, and I've never felt entitled to speak for such a disparate population, who can rarely speak with a single voice. But now, perhaps it's a little easier. A parting shot, with one hand on the door already, might seem cowardly - but it's long overdue.

I moved to Highbridge just little over eight years ago. It made sense for lots of reasons - I was living in a pretty unsatisfactory property elsewhere, and the family were all assembling here after a few difficult illnesses and a newly born child. We were coming together via an unspoken gravity which focused on my parents who lived away to the edge of the town in a quiet close near the Radio Station. My sister and her growing family overshot the southern boundary and ended up in the fringe hamlet of Alstone - a neat little family home with space to grow. But with my less pressing need for space and greater need for economy, I ended up here in the centre of things. Well, perhaps formerly the centre - because there are few businesses left on Church Street, save for hairdressers and take away food stores. My flat was perfect - a short walk to the station for my frequent escapes, a stone's throw from good beer at The Coopers Arms - it was just the bolthole I needed. In reality I'd spend little time here - edging around a triangle centred on home, supermarket and railway station on the whole, and making regular escapes to what many here would consider 'foreign parts' elsewhere in the country. But it wasn't possible to remain on the edge of the debates about the future of the town. Like always, I just had to get involved.

It's easy to be critical of Highbridge - alongside many hundreds of places across the country which haven't made an easy transition from their mid-twentieth century golden age to these more prosaic, straitened times. But in the case of Highbridge, its easy target status has set in train a descending spiral which feels almost impossible to stop. Industrial decline is a tough one to tackle in itself, but here successive waves of ill-planned development have bolted new problems onto the town while simultaneously stripping away its public infrastructure. Traditional industries - bricks, bacon, railway vehicles - have gone completely. Light industry is being pushed out of town by more lucrative housing plots, and the motorway hugging strip of vast aluminium distribution centres is big on space, but light on people. Where do people here go for work? Increasingly, they just don't. Highbridge tops the table in terms of unemployment and deprivation - serious statistics which are easily ignored in a world of numbers, but which here on the ground are self-evident in the faces of people sitting outside their homes in the middle of the day, watching the traffic thunder by. I've often asked myself why it ended up this way.

It's all too easy to be fatalistic too - and to suggest that the decline of towns like this is inevitable, and none of this can be remedied. However, there is a more self-evident reason in the case of Highbridge - and, while I know this will be controversial in some quarters, this has a lot to do with Burnham-on-Sea. Burnham is on the face of it a genteel, benign neighbour - a fading Victorian seaside spa which spans a stretch of muddy estuary but delights in big western skies and the views of a broad sweep of beautiful coastline from its windy esplanade. The secret here though, is that Burnham is dying too - just a lot slower than Highbridge. The Town Centre is seeing its retail core crumble away - not precipitated by de-industrialisation like Highbridge, but by apathy and inaction. Independent retailers turn into charity shops, which eventually close. The few national chains who are here offer a downgraded, second-string service. At 5 pm each day, the shutters come down abruptly - and for some shops, they never come up again. Business-folk spit inexplicable vitriol in the local press - blaming the internet, or the townsfolk for not caring - never looking to the economic reality or their own refusal to move from ancient business models. But as Burnham declines steadily and the Town and District Councils struggle to manage its retreat, they use Highbridge as a defence mechanism - an urban buffer zone that can absorb the mandated social housing and the necessary evils of badly planned supermarkets. There has always been a grim-faced bitterness about this here in the Town: "Highbridge is a dumping ground for people they don't want." It's not entirely untrue - it used to be an expression of hugely exaggerated class prejudice, but now it's just chillingly accurate demography. Interestingly, voicing this particular gripe - even when it perhaps wasn't entirely the case - opened the door for policy and practice to completely make it so. It became a self-fulfilling prophecy, and the policymakers must have cocked a surprised eyebrow at just how easy it was in the end. It's almost like some people here in Highbridge wanted this to be the case perhaps?

Urban Planning is an arcane art, and its exponents go largely without thanks for what appears on the surface at least, to be a boring, clerical function. Done well, of course, planning shouldn't feel obvious - but here it has become a weirdly public activity that excites unhealthy interest. In short, Highbridge is in thrall to two or three major developer/land-owners who vie for a finite amount of public funding. They do so by buying cheap brownfield land and proposing schemes that offer tenuous and untestable benefits in the future. They put planners in the impossible position of trying to anticipate future moves - a game of chess for which the prize is jam tomorrow. Of course, these schemes are always just beyond the electoral horizon too - so approving them holds no immediate fear for the politicians in most cases either. So, if you believe any one of these visions, we're due a marina, a cultural zone, a rejuvenated retail area. But the truth is that any crumbs that our largely indifferent District and County Councils might drop here have been theoretically spent over and over again. The Councils are complicit in these games too, buying ransom strips of land on silted riverbanks, knowing that if the grand schemes materialise their tiny investments will sit squarely where someone else needs to build. But just like chess players, no-one needs to make their move hastily. It can wait. Highbridge will still be there and will be a little more desperate the longer the horizon is pushed out. This stalemate is played out behind Olympic-blue fences, in burned-out hotel plots and in strips of scrubby land in otherwise developed parts of the town. Planning here isn't a distant and administrative process at all - you can see and feel it slowly eating away at the place.

Of course, the only defence is to object - and some in Highbridge do, often very loudly and with the support of some dedicated, informed local voices. But resistance in Highbridge is tribal and patchy - not nearly as slick and well-managed as the middle-class retirees of Burnham pull off again and again. Groups form here, and swiftly crash as a few dominant and depressingly resigned personalities bring them down. Associations form around bids and funding grabs and swiftly retreat into their own little territory. There is no coherence, no sense of a town wanting to work together to get out of the doldrums. There was, many years ago, a bid to separate the Town Council into two. It fell, among dire warnings that Burnham was propping up Highbridge, and that we couldn't live without the guiding hands of our betters. These patriarchal, conservative (in its truest sense) attitudes from the Burnham centred Town and District Councillors are bucked by a few voices of reason here in Highbridge - but they're barely heard over the roar of organised, directed anger when similar issues crop up in Burnham. Take a tale of two formal applications - planning for a petrol station on a crowded, ill-planned supermarket site in Highbridge, and licensing for a Convenience Store in Burnham Town Centre. Both raise serious traffic and environmental issues, both will impact other businesses in the area. The first is supported - it'll increase competition for fuel prices and the noise and traffic won't hurt too much. The other is contested vehemently - it'll increase competition on local businesses and the traffic will be unbearable. I'm fairly sure I know how this will pan out - and recent decisions about the Tucker's Garage site, which isn't so different to the Highbridge Hotel in some ways, go further to prove how skewed the decision-making is across the two towns.

I can't leave this rant without at least some glimmer of hope, can I? There's always a little bit of light at the end of the tunnel, surely? Well - as it stands, no there simply isn't. While national policy turns the screws ever tighter on many of the people who make up the town's population, and while regional and local policy fails to recognise that it has taken all it can from the town, things are spinning out of control here on the ground. So what can be done?

None of this is easy - and perhaps writing it down in this way is a little glib and self-serving? Maybe so. But I can't leave this place without hoping that somehow people will find their voices, form their opposition and fight their battles. I tried for my part, and didn't get very far - but there are brighter and more dedicated people than me in Highbridge for sure. Good luck everyone, and don't let the developers win!