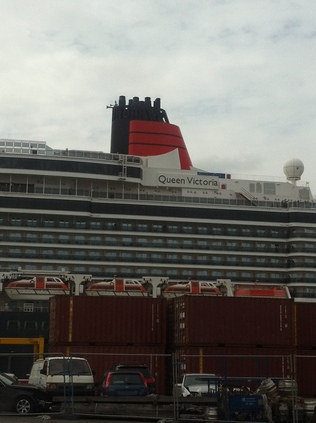 I'm playing catch-up with these entries after a very strange and directionless few weeks where I've managed to think about doing lots and actually achieve very little. In the middle of this period came the welcome opportunity to get away and travel - always something I value, as much for the chance to observe the world at large as anything else. But this trip had a purpose too, which was this curious tour to points south. Completely illogically of course, I started out yesterday by heading in the opposite direction - north to Crewe. Class 20s aren't my favourite traction by any means, but they're unusual enough to warrant a bit of a trip to get some mileage with them - especially as you have to wonder just how long they can carry on hauling trains like this on the mainline. A fitful night and an early start made for a rather bleary-eyed walk to the station where I met familiar faces including my travelling companion for the day. In fact, the tables we occupied became a pretty sociable little knot in the middle of a rather quiet carriage, which is always a good thing in my book.

Despite predictions of failure or non-availability the pair of 20s, one required and one not, turned up on time and shot away from Crewe in surprisingly rocket-like fashion. We sped south taking a route skirting the Midlands to join the route to Banbury and Oxford. I've used this route surprisingly often this year, having not needed to in recent times - and I'm always impressed by how quietly but surely, Chiltern Trains have delivered on their Project Evergreen promises - faster alignments, restrictions eliminated - little improvements that sum up to a better experience all round. At Aynho Junction we headed for Didcot, and the Foxhall curve onto the mainline. There had been two separate foul-ups on the Great Western this morning - one around Paddington and the other in South Wales - which meant some of the participants who were due on the train were behind schedule. Given some space due to gaps in service, we were unusually allowed to wait a while, and a rammed Gloucester-Swindon unit and a busy HST soon turned up with the missing folks. We headed off again, via Thingley Junction to the rarely used Melksham route and onto the Portsmouth line. Here, my usual ennui descended and I dozed and chatted as far as Southampton Maritime. I also realised I'd rather strangely chosen to replicate this route next week too!

Arrival in Hampshire meant we'd reached the focus of the tour - a little but significant crop of very unusual lines around the county, starting with a call at Eastleigh to let off passengers who wanted a short break. Out of the station northwards and onto the Romsey branch where we reversed at a signal, and headed back through the station non-stop with the trailing 37 in the lead now, and into Eastleigh Works. I'd been here before, but we used a different line - one that disappointingly had a fair amount of former Metropolitan Line stock stored on it - although to be honest they all did at present! This meant many people didn't get far past the gates, but the First Class end was well positioned and the usual tide of 'vestibule creamers' made their showing as we came to a halt. The original plan had been a traversal of the depot loop which hadn't been possible in the end. I was lucky enough to have done this too, so it wasn't a great loss - but it did mean we ended up with a fair number of very odd reversals here - which began to take their toll on people's sanity! So our next reversal took us back through the station with the aim of halting at Allbrook Junction. In the event, we ended up back on the Romsey branch. This is where things got a little hazy and the driver seemed to lose track. Returning to the station we were signalled onto the Down Through line, leaving a large group of bewildered patrons stranded on the platform. Coming to a shuddering halt short of Southampton Airport Parkway, we eventually headed back into the platform, collected our punters and continued towards Southampton. A very odd and slightly amusing interlude!

Underway again, rather than taking the severe curve towards Southampton Central we continued straight past Northam Traincare and onto the docks branch. This more direct route served an impressive terminus at one point, the rather grand buildings of which remained evident. Passing multi-storey storage areas for the motor industry, row after row of Minis and Landrovers were evident. Also in dock was the vast Queen Victoria, a huge and impressive sight beside the line. Pressing on and winding through the Eastern Docks, we finally came to the QEII landing stage. I'd been here before - on foot from Southampton after an edgy night in a B&B miles from town - or so it seemed. That time, I was meeting people arriving by boat to live here. Today, I was just passing through as we pressed on to the very end of the line. An excellent result, though we were urged not to get out because the fee for 'use of the station' was huge!

Reversing again after a very efficient change of ends, we headed back to Northam Traincare, using the Reception Line there to reverse once again and head through Southampton Central to reach the gates of Western Docks. This shorter branch led through a more industrial scene, curving away from the mainline and through piles of sand and building materials to double back towards the point we'd reached on the Eastern Dock branch. There had been a through connection at some point, but this had long since gone and we soon found our way to the end of the short branch, again reaching the furthest possible point. It had been a very successful day from a track bashing point of view - and being at the right end of the train for the branches was a very welcome change!

The return trip wasn't without incident either. Firstly we headed towards Guildford using the rather dull line via Petersfield. This was a sleepy bit of the journey with little happening, although it was interesting to watch how we made up and then lost time. We weren't seriously late though, and I was content to laze my way along the line. Getting lost in the tangle of lines around Ascot, we were due to pause at Ash Vale - ostensibly for a photo stop on an otherwise long day on the train. This stop was curtailed to keep us on time, and de-training via the front four coaches would have meant it was unlikely we'd manage even to get off in the time allowed! From here we took the route to Reading, using the connection which climbs from the Southern tracks to the Great Western mainline - something I don't recall doing before. Work on reviving the underpass which will allow trains to reach the other side of the revitalised station seemed to be progressing very well too - and I wondered if we'd have used that route if it had been available? Our first set-down was at Didcot, in lieu of Swindon on the outward run. Except we didn't stop. Taking the curve through the station at speed, once again a number of passengers looking rather stunned as the platforms zoomed by. Those poor Swindon punters who'd been inconvenienced by the early issues were once again the victims as we made a call at Oxford for them to alight and head back to Didcot. 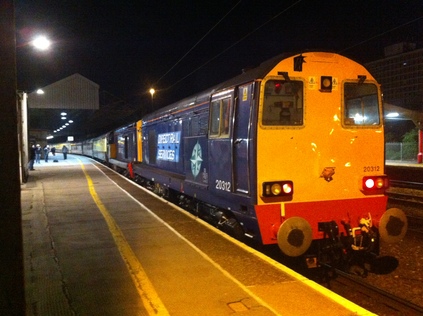 The run back to Crewe was quiet and pleasant in the summery evening, and was only marred by the activities of a couple of BLS people who I probably shouldn't name, working the train and stirring up feelings against a former colleague. If nothing else, this solidified my resolve that resigning from the News Team had been the right thing to do. Otherwise it had been a successful, sociable and interesting day. There are so few good tours operating this summer that these days are increasingly precious and important.