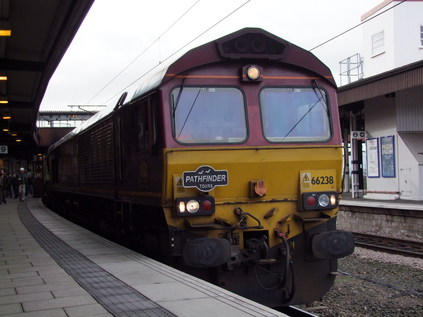 It's almost unprecedented to have managed three railtours by February, especially with one of the major promoters currently not actively promoting any trips, and it's even more surprising that all of them have involved significant sections of new track. So, having dallied in South Wales and West London, this trip too my track bashing northwards to a bit of line which many of us thought was lost. Last year in October there was an unenviable choice available - a one-off dispensation for Pathfinder to go to Gwaun-cae-Gurwen, or the unprecedented UK Railtours trip to Seal Sands. On grounds of economics alone in not wanting dining class, I settled for South Wales on that occasion. However, with the rare track market split and another option for the haulage types too, something had to give - and sadly it was the G-C-G trip. Lots of recriminations and arguments later though, that trip is rescheduled and today Pathfinder were heading for Seal Sands.

Having scoured cheap options on the route, I'd ended up in Sheffield for the night - no bad thing, and given the need for a decent sleep I didn't really see much of the city. A shame because it was a beautiful day - but a rather fraught trip up on an overstuffed voyager had sapped my will for society. It was however nice not to have to set out too early, and with blue skies and a cool sunny morning I wandered down to the station for a leisurely breakfast. The tour rolled in on time with required shed 66238 on the front. There was talk of 004 or 030 later - either fine by me. Noted the tour was quiet - obviously lots of people had covered the line with UKR, and the addition of the short bit of the Jarrow branch which could be traversed was a draw only for those of us who'd missed last time too perhaps? In any case, settled in and after a brief stop at York we pressed on for Tyne Yard.

Here an unexpected bonus was achieved. We used the usual Transfer Line into the depot area where 66030 was attached to the rear. However, booked to leave via the 'U' Line we then reversed through the carriage washer and into the exchange sidings, before heading forward again to exit the depot. Cue much debate about which lines were still left in the now almost deserted depot, and which we'd used. All part of the fun on these trips. Skirting Newcastle and Gateshead, we were soon sharing tracks with the Tyne and Wear Metro, peeling off from the main line at Pelaw Junction and using the left hand track of a former two-track alignment, the Metro now taking the right hand line and fanning out into passing loops at stations. We stopped just short of the bridge which carries the line over the roundabout at the entrance to the Tyne Road Tunnel - mainly because there is no walking route over this bridge for the crew to change ends. While it felt like we didn't head far towards Jarrow, practically that was the limit, and most were happy I think.

Retracing our steps into County Durham, we took the Stillington Line, covering the fairly tricky to get, and required by me, third side of the Norton triangle, before curving away from the mainline at Billingham Junction. After Belasis Lane, the track narrowed to a single, fairly creak line through a blasted industrial landscape. Huge tracts of open land, abandoned buildings, and a view across the Tees to Middlesbrough, with splendid views of the Transporter Bridge and the curious Anish Kapoor designed "Temenos" - a huge butterfly net sculpture and one of potentially five along the Tees. This generated a bit of discussion among the locals on board too! Curving sharply north onto what was once the inexplicable Greatham Creek branch to nowhere, we reached the end of the line at Seal Sands Branch Junction. 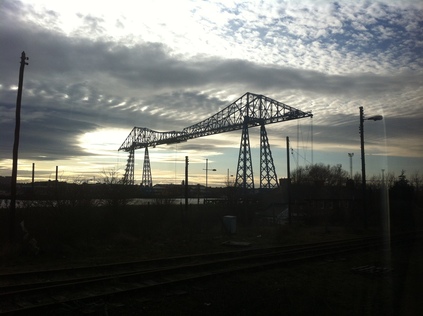 There had been much debate about what would happen next. The UKR trip had managed to take the branch and get to 2m 22ch - but it took three hours for the return trip, and necessitated manual working of the automatic crossings due to concerns about the infrastructure. This area hasn't seen regular use for nearly a decade, and there was understandable paranoia about safe methods of work and condition of track. However, early Peter Watts had shared the DBS view that the route was available, could potentially be required for revenue traffic, and should be traversable beyond Rohm Haas Crossing at 1m 42ch which was the advised reversal point. We crept around the rusty curve gingerly, but at the first crossing had only a short wait before proceeding. Slowly we crept on and on. At Rohm Haas we stopped for what seemed like ages - but then, carefully, we pressed on over the crossing. There was much excitement now. Occupying a vestibule with a couple of BLS faces we calculated distances and checked mile markers on crossings. Finally we stopped just short of the run-round loop and the crew headed back. We had at least equalled UKR's run, if not exceeded it by a chain or two. The bet on which tour to back last October hadn't gone quite as badly as it seemed.

The return run was equally careful, but with the sun dipping over Middlesbrough and the sense of achievement on board it didn't seem to take long. We dropped our tail loco at Eaglescliffe in the dusk, and unfortunately with no heat from the generated, shivered our way back south in the clear, cold evening. Today had been a huge success from a passenger perspective, if not the fullest train I'd travelled on. Again, with all the interesting stuff achieved in daylight, despite being late February, there were lots of happy punters.