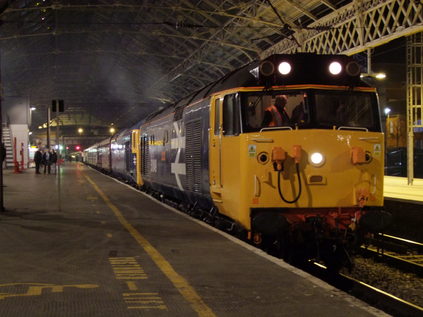 Yet again, this tour had already generated pages of internet debate before a wheel had turned - but for me, with a bit of a grind of a working week to deal with, I'd almost not given it a thought until yesterday when I began my wander up to Preston. But, after a comfortable night in the new Premier Inn, even the beginnings of a cold couldn't dampen the excitement. Class 50s on the mainline, into Scotland - something I'd not really expected to see with the recent history of the preserved examples of this class which is synonymous with my home area. Slogged down to the station at around 4:30am, with the sound of the engines already floating up to Fishergate as I headed over the bridge. The stock was, for the standard class folks, not the right way around - but being in the middle I wasn't too worried. Took a few quick snaps of the locos before heading for my seat. Ideally positioned beside the kitchen car for an early breakfast too, which set me up for the 700 or so miles ahead...

Just like previous winter tours which have done this route, the fog closed in somewhere around Huddersfield, just as some familiar faces joined the train. However somewhere north of York, the mists cleared and the sun came out. So, strangely, after some fast running we arrived at Edinburgh Waverley in bright winter sun to a gallery of photographers. Having focused on the 50s, I hadn't considered 57001 on the rear - now in West Coast Railways purple and fresh from an overhaul, this was a winning loco for me. As we set off in the direction we'd arrived from, a cloud of white exhaust filled the station. It seems 57001 is a surprisingly interesting example of it's class!

The timings for the minitour part of the day had been troublesome for a while, and here they began to become wearisome. Around forty minutes allowed for a traversal of the Suburban Lines left us waiting for ages to head for the Forth Bridge and into Fife. It was hot and sleepy on the train, and after chatting for a bit around the circle, I soon dozed off. My second visit to Fife of the year was a little less eventful than the first then. Returning to the capital for a break, we once again slogged slowly around the sub waiting for a platform in the station.

I didn't stray far, since I was feeling worse by now and the thought of a trudge into town wasn't too appealing. So shopped a bit, had a coffee and chatted to fellow passengers before assembling with the growing crowd for our train. In true Waverley style, the stock was late in, with an errant Newcraighall unit blocking the platform until after it's due time. However, once we'd struggled past the obstructive construction works on the station and onto the train, we were soon heading south into the darkness. It was a long old run back, but the locos peformed flawlessly throughout.

Winter tours can sometimes be a bit gloomy, but this was a sociable affair with some cracking locos and some fine running. It was also very probably my last trip with Spitfire of the year - it's been an interesting and unpredictable one, but again there have been some cracking trips. Here's to next year...