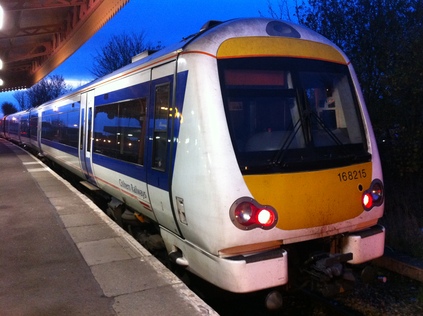 Over the last few weeks there has been quite a buzz about TOC-operated tours doing all kinds of interesting track - and with First Great Western soon to operate a 'Class 142 Farewell', this feels a bit like 'any old excuse' really. A more appealing prospect in traction terms though, is the London Midland operated Class 150 farewell. These stalwart units are mostly making their way down here, and as the all-new fleet of Class 172s is delivered, people are getting just a little nostalgic in the Midlands. I'd looked at the possibility of travelling on the trip, along with a number of other BLS folks, but a tricky start time meant at least one night away, so instead I decided to reverse things today and say 'hello' to the new units instead. So, armed with a West Midlands Day Ranger, I set off on a wander around the area covering track that I hadn't seen in ages - including a few surprises too!

Quickly booked the Day Ranger on arriving at New Street, and headed straight to Moor Street. I was taking a pretty relaxed attitude to today, given that there were plenty of options and a fair bit of time - but in the event a shiny new Class 172 arrived just as we entered the barriers, so we hopped on and headed for Stourbridge Junction. The units are much like their electric cousins, but have a real sense of space inside which makes them feel comfortable. At Stourbridge, a quick cross-platform move to swiftly head down the Town branch on 139002, sadly the same Parry People Mover from my last visit here a couple of years back. Stourbridge was under construction, with a new bus station being built on the site of the old one - navigated the diversions into town briefly, before heading back to the Junction. From here it was a short hop to Smethwick Galton Bridge, where we planned to head for Wolverhampton, with one eye on a very late running Arriva service from Wales, just in case it used the rare Platform 6. In the end, the next train in was Liverpool bound, so we hopped on - and with the Arriva unit apparently still running through to Birmingham we stayed on to Crewe, the northern extent of the ticket validity.

Time for an early lunch at Crewe before the 11:33 to Euston, which we covered as far as Northampton - as far as the ticket permits heading south. This was a decent length journey, if rather warm and busy journey and gave me a chance to snooze a bit having had two pretty awful nights of sleep. Over the bridge at Northampton and onto a Birmingham-bound unit. Lots of possible combinations of journey were proposed here in order to get to Stratford-on-Avon via Leamington, but none worked well - so instead we once again walked over to Moor Street to find a bit of a chaotic scene with late-running Chiltern services terminating here rather than going on to Snow Hill. This meant the next departure would be from one of the terminal platforms, which I needed - so duly waited and hopped on as far as Leamington Spa. Again, the options weren't good from here so we decided to explore the station a bit, wait a little while and then catch the terminating short working from Moor Street from one of the bay platforms. This ended it's journey in the other terminal platform at Moor Street, thus completing the set for me.

So finally, we headed back to New Street for the voyager home. I didn't spot the Class 150 tour anywhere on our journey today - but I understand it all went pretty well. However, it was really good to have a flexible, easy day out with a few interesting bits of railway thrown in. The ticket is surprisingly good value too!