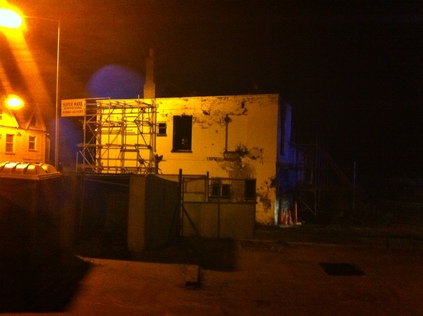 Once again on Monday, a pair of apparently disaffected local youths set fire to the remains of the Highbridge Hotel - this time in broad daylight on a busy weekday evening. It was again a pretty serious fire, which given the sodden timbers of the interior must have been generously accelerated to reach the intensity which it appears to have. A huge amount of damage was done to the remains of the interior and the roof. At present, it's not known if any further structural damage has occurred.

It would be so easy, with the fire coming just two days before a public meeting to discuss the site, to invent conspiracies. It might not even be inaccurate to do so, but if yesterday's meeting needed to do anything, it needed to break the three-way impasse between community, developer and Local Authority if it was to move things forward in any sense. The meeting was, in fairness, rather a shambles. A proposed 'drop in' session of three hours, organised during the working day and thus fairly inaccessible, became a formal meeting of just two hours. So I ended up blundering into the room around an hour before the published end of the meeting to hear the chairman say "well, lets start wrapping this up then...". To be frank, I'd been in two minds about attending after the "behave or else" warnings on the town's internet forum from the chair. I didn't think people would be able to articulate what they felt without anger - and I also thought it was important that Council Officers heard it. The developer, less so - he'd already had his serving and seems impassive in the face of it. But after all, the bit of the meeting I caught was temperate and fairly interesting. I also arrived in time to find the thoughts I'd provided for one of our Town Councillors being read to the meeting by someone who did so much more articulately than I would have. I'll reproduce it here, because it continues to sum up what I feel, and I think it struck a chord - however minor - with the SDC officers:

The Highbridge Hotel on Monday evening

The debate about whether to clear the site or rebuild the hotel is fundamentally not the right one to have. The public should press their council and the developer to come up with a range of proposals for the site, with or without the hotel. We shouldn’t be asked to make an impossible choice based on blind faith that “something” will be done with the site in the future – that way we could lose a huge asset to the town without any guarantee of a scheme which will benefit us. If SDC are serious about building positive momentum, real costed proposals for the site with assessments of impact on the area are a start to rebuilding Highbridge’s relationship with the council.

We need a solution for the site which links to the economic regeneration of the centre of town. Housing of the right form, quantity and quality quite rightly plays a part in this. But only if the proposal for the site can sustain employment at least for those moving into the homes, and ideally to others already seeking work in Highbridge, is it right to progress it. An unsustainable development which adds to the burden on stretched infrastructure without contributing economically to the town is simply not an option for Highbridge now.

With respect, a community facility is just not needed. We have many such facilities already, and the idea that a building or centre could repair the damage wrought from years of poor planning decisions is frankly insulting. Given that the lead time and partnerships for building schools, health facilities etc. is simply not available I can only think this means a meeting hall. We need to move beyond 1970s views of community development work and start to engage with the evidence about what the community needs – in the Joint Strategic Needs Assessment and elsewhere. The damaged hotel site has galvanised more community spirit than any specific action SDC has taken in years – there is a strong message in that about the value the town places on the site, and the approaches SDC are using to the community.

So, will this lead to change for the site, and more importantly a new attitude to Highbridge? Will a revival of the regeneration partnership manage to side-step the usual political footballers and move the site towards a development which has what Highbridge almost universally told Sedgemoor District Council it wanted (retail, jobs, economic viability) rather than what it expressly doesn't (flats, takeaways, more community halls). What kind of people will volunteer for the partnership? It needs to be a mixture of the usual stalwart local volunteers, and people who can slalom through the obstacles of governance and planning without losing heart or feeling overwhelmed. No mean feat, and potentially a thankless and incredibly time-consuming task.

This of course leaves one final question - what of the building itself? Sadly, I sense the tide is turning and the developer is winning the apparently recession-imposed war of attrition. Plenty of people think he's almost redeemed himself because he's letting the local kids (some of whom he confesses he'd lock up!) paint the new wooden hoardings. Thus, the will to knock it down if it will be expedient is strong. Still though, the building hovers as a pale grey, sinister presence on the maps of the proposed 2008 development which were paraded again tonight - almost defying it's own deletion. Quite whether it will survive the efforts of casual local hooligans, let alone the professional ones is up for debate.