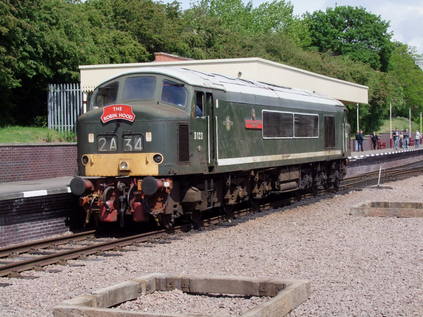 I'd had a pretty tough week - not in any specific sense, but recovering from Homegame had proved every bit as hard as people had suggested it might. A long, frustrating journey back from Anstruther on Monday had sapped my patience with the modern railway too - where apparently a complaint and refund is preferred over actually using resources to get people home on time at no extra cost. But, like always when I feel hemmed in, up against things, or just generally glum I turn back to the rails for comfort - or indeed just distraction. Today promised plenty of that, as the Great Central Railway and the GCR(N) were hosting a joint diesel gala. These railways, once part of the same wonderfully engineered mainline are geographically separate only by yards. However the project to rejoin them via a bridge over a canal and the Midland Mainline in Loughborough has been a long one. However, as it takes gentle steps nearer to becoming a reality, seeing the railways working together like this is encouraging. The journey up to Leicestershire felt like a breeze after the slog back from Scotland earlier in the week. First train out, time for refreshments at Temple Meads where I continue to revel in the presence of Starbucks. Indeed I was served by my favourite barista this morning, which always brightens my day. Then onto the 07:00 for the sleepy trip into Birmingham. A little slow running around the Lickey Bank though, as a charter train hauled itself up, which was later seen to have 47580 at the helm, veteran of a recent trip to West Wales. A bit of confusion at New Street because I was more concerned with coffee than trains at this point, but eventually onto the 08:52 to Leicester. One final quick change via a cross-platform hop onto a Meridian and we arrived in Loughborough, with the weather still looking pretty fine despite dire warnings.

The short walk to Loughborough Central however saw the clouds close in, and as we queued - for what seemed like a long time - the rain began to pelt down in something of a summer storm. The delays seemed to be down to issuing hand-written paper tickets. Not perhaps the best plan for what promised to be a very well attended gala. Eventually onto the platform in time for one of the shuttle services to Rothley Brook, with a motley collection of shunters and a Type 1 in charge. The train left very late indeed, and with the timetable already seemingly going out of the window, we had to re-evaluate what we could realistically do today. My colleagues' priority was covering both lines - while I needed only the short branch into the Heritage Centre on the GCR(N). However, as it looked like the times left us unable to sample the visited Class 56's, I was content just to get a couple of decent long trips with the extensive roster of locos around. After dodging back to Loughborough, D123 did the honours on a full length trip over the line to Leicester North.

D123 runs around at Leicester North

There was just time for a fill-in move using D1705 out to Quorn and with the disconcertingly yellow 37198 and more traditionally coloured 37275 top and tailing the return. Things seemed to be roughly getting back to time after what appeared to be a failure on the Class 20 hauled service earlier. No time to hang around though, as we needed to get the 13:00 bus to East Leake in order to sample the other section of line. Considering the very small gap separating the two railways, the bus journey was quite long - taking us over the border into Nottinghamshire along the way. East Leake station is still a fairly rudimentary affair, but a shelter is under construction. The GCR(N) is an interesting line given it's fairly unique method of joint operation with Network Rail to service the British Gypsum factory. It's a credit to the operators how they use the line to best advantage despite not having any huge tourist visitors centre or much in the way of ancillary activities besides the trains. What we got was simple - interesting engines and a long run down to Loughborough, stopping just short of the chord which connects to the mainline south of the station. This also afforded an interesting view into Brush Works, where engine testbed 56009 (latterly unofficially dubbed 56201) could be seen. Back to East Leake for a change of traction, before heading north towards Ruddington, and the reverse into the Heritage Centre site. This is a bit of a confusing muddle of stock and buildings, but a station is taking shape in the centre of the chaos. Watched further changes of engine, with veteran of Brighton services 31454 taking charge. 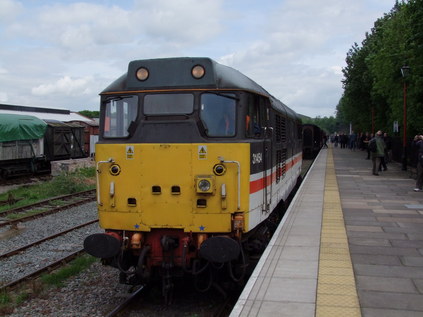 31454 - formerly a local regular - at Ruddington
A good noisy chug back to Loughborough followed, where we reversed again to head back to East Leake. This was where we had to leave things in order to catch the bus. Not before getting the opportunity to watch splendid looking large-logo 47292 being attached from the loading pad close to the trackside. Back to Loughborough in now pretty steady sunshine for the trip back home, via a refreshment break at Derby where 66101 surprised us by passing on the goods lines. It had been a busy and interesting day, and despite the frustration with the queueing at Loughborough and the slight perturbation which limited what we could do earlier in the day, things had gone pretty well. The bus links worked particularly effectively, and the operation on the GCR(N) was faultless despite some complicated loco manoeuvres. I'm not sure we got best value for the slightly steep rover price of £28, but I think the only realistic way it could have been better used would be to have got digs in the area and gone for the better value weekend ticket. So these two ambitious railways pulled off a first step in their journey towards bridging the gap. I look forward to more of the same in future.
Movebook Link