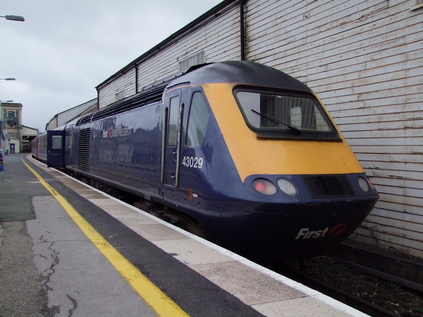 Unusually, I had something interesting to do this evening - and having planned in advance, I knew I needed to be back on home turf by around 5pm. Thinking about how I could use the day, rather than in just moping around my house, I hit on a plan to head south and cover the branches which radiate from Exeter. I'd not covered these for many, many years - and those travels were some of my earliest excursions. So, having assembled some vague memories and booked some actually frighteningly cheap advance tickets, I set off for a day out in Devon. Despite a slightly later than usual start, it was still dark, cold and a little miserable. The week had been warmer - no bad thing, but the initial relief that the snow had melted was replaced by a gloom which the short, grey January days were doing nothing to put right.

A swift change at Taunton, and soon we were arriving at Exeter. Here there was time for the all-important breakfast before heading up the line to Barnstaple. My memory of arriving here included a quaint but rather dilapidated station building, the town bridge and a windy walk over the river. A bit of sunshine appeared as we started the ramshackle ride up the branch on a Class 142, but by the time we reached the coast, a grey mist had descended. Initially I was surprised by the refurbishment of the station. A tidy platform with a canopy and a pleasant little cafe in the clean and spacious booking office. This was all housed in the original buildings. Once outside, things were a bit disorienting, as a new bypass has taken the main road away from the station, leaving it at the end of a quiet terrace leading to the bridge. The empty land between the river and the railway was now being built on - where no less than four other lines once joined the current, former London and South Western route. This included a large out-of-town Tesco Extra which might perhaps change things a little here? Once in town, I was struck by how sensible planning and development have kept the High Street an important focus. Plenty of small shops, branches of national chains and even a small shopping centre jostled for position beside the busy covered Pannier Market. People were using the shops, stopping to talk and enjoying the cafes. It was a revelation to someone who lives in a tired, run-down town which has been similarly condemned in the past. An hour wasn't quite long enough to wander, but nonetheless I made my way back to the station for the train to Exmouth.

43029 awaits time to turn back at Exeter St. Davids

The run back down the branch and through the centre of Exeter was a little busier than the train up had been. There were plenty of people using the train to get to the shops, and a fair few already heading back once we set off again from Exeter Central and onto the branch. The Exmouth branch had also changed little, save for an impressive walking and cycling path which ran alongside the line, often raised over the wet boggy land on stilts. Noted the small, attractive village of Lympstone which would merit some exploration perhaps in future, before arriving at the modern and rather tired looking terminus at Exmouth. I could remember less of this end of the line, and certainly not the subway leading into the Town Centre. The High Street had seen some unsympathetic work, and perhaps the greatest shock was that the quiet formal garden which sat in the middle of town had been pulled up and replaced very recently by a somewhat bleak concrete plaza. Tried to orient my memory of sitting here for lunch around sixteen years ago, but couldn't. Instead, went to the pub for a pleasant meal before heading back to the station. I wasn't impressed with how Exmouth had tried to achieve the sense of a bigger town at the expense of a soul. It came across as tired and beaten, not unlike some aspects of home.

Plenty of time to enjoy coffee in a little late afternoon sun before departing Exeter. An earlier bridge strike on the Berks and Hants route meant the train which would work our service had terminated here, short of Plymouth, it's usual destination. Found it sitting awaiting booked time in platform 6, rarely used by me since the 2004 summer services. Took a snap against the wall, for posterity. Despite being here in good time to start the journey, a minor technical hitch delayed our departure by around ten minutes. This just ate into a longer wait at Taunton for the train home, so didn't really affect things too much.

It was strange to revisit these places, not really so far away from home after so long. Barnstaple was encouraging and inspiring, and Exmouth disappointing in equal measure. However, this reminded me of the inquisitive interest in the rest of the country which set me off on these escapades in the first place. Sometimes, staying fairly local provides surprising insights.