As I mop up the tiny bits of track left uncovered by just over a decade of travels, I'm often left with long journeys to reach tiny fragments of line. I've never approached this strange quest in any sort of order - travelling where I fancied, letting events and happenings around the country guide my travels rather than any sort of master plan. Constantly revisiting favourite haunts in preference to finishing the job. It's been a luxurious and stately jaunt which I'm happy continues in much the same vein. This leads me to this weekends' trip - a great circuit of central England, venturing out into the uncharted east before retracing old steps to get home.

Left for the station in freezing, billowing fog. Not sorry to get on board and trace a familiar path via a change at Weston and an early arrival at Paddington. The fog barely lifted as I sped east, but there were tiny breaks in the clouds and little hints of sunshine could be seen breaking through. However, despite managing unusually sensible amounts of sleep last night I managed to snooze happily for much of the way, perhaps due to the nice warm carriage in contrast to the chilly scenes outside. A quick transfer to Kings Cross which is now in the midst of it's own transformation following living in the shadow of mighty St. Pancras for a good few years now. Sadly, this meant incredibly long queues at anywhere which sold food or coffee and made for a congested and frustrating experience trying to move around the place. This set a sort of tone for the day. Finally gave up and boarded the pair of Class 365s bound for Cambridge and Kings Lynn. Soon away and flying north through the still foggy suburbs. We branched east at Hitchin before grinding to a halt behind an ailing stopper which limped it's way to Cambridge with us arriving late and getting later as London-bound shoppers mobbed the rear before staff had the opportunity to divide the train. Eventually away again, but having missed our path onto the single line beyond Ely, lost further minutes in approaching Kings Lynn. Knew we arriving from familiar sights beside the line as the branch from Middleton Towers slewed in from the south. Oddly, I'd done not only that branch, but much of the length of the sidings which curve towards the waterside here - but had never arrived into the station. Soon rectified this, drawing into a busy little terminus with an inviting looking buffet and a fair number of stabled units. For today at least, mission accomplished with a brief section of new track - perhaps only 20 chains or so - covered as planned. 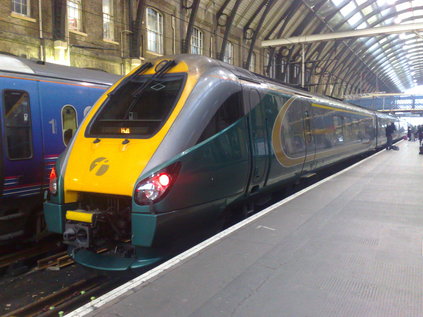 Once again I was defeated by queues here with the buffet looking busy. Late arrival meant no time to stray from the station, so I hoped that the little coffee stall at Ely, often staffed by mysterious eastern european girls, was still open for business. A short trip back down the Fen Line proved it was, and after a quick trip to the nearby Tesco for sustenance. Realised I'd missed a fairly interesting looking GBRf freight service seconds before arriving back into the station, and frustratingly could hear a loco idling in the mist somewhere for much of my stay too! Settled for enjoying a couple of welcome coffees from the aforementioned booth while I awaited the Crosscountry service to Birmingham. I'd worried about this train a bit - I remembered painfully full trains around here, and was convinced that was the order of the day. Despite Crosscountry introducing First Class on the route it seemed impossible to book this prior to the timetable change, and knowing the XC policy on upgrades for Advance ticket holders I didn't even chance it. As it is, found a quiet seat and settled in for a very foggy trip across the fens, retracing a diversion I'd taken in a panic on a Sunday many years back when something went wrong between Lincoln and Nottingham! Not much scenery for inspiration, so enjoyed a late lunch and a good read as I sped through the dreamy landscape. Peterborough stood out as an interesting sight with a fair few locos on shed. The train also managed to avoid being busy for much of the journey, but I was moved briefly across the carriage as I didn't realise I was opposite a wheelchair bay which was needed between Leicester and Nuneaton. Arrived rather more quickly than I expected in a chilly and dark New Street with the diverted train to Bristol due to arrive soon and wait for over twenty minutes before departing. Realised with some regret that the conditions today meant I'd barely taken a picture at all - an increasingly common situation with recent trips heading for the somewhat camera-unfriendly southeast. Consequently, no pictures at all in this entry.

Settled in to my seat for an extended trip home in the dark travelling via Smethwick, Worcester and back onto the mainline at Cheltenham. Despite the timetable showing correct times, a fair few people seemed to get quite excited by the diversion, so I tuned them out and read my way home. As I trundled back to Highbridge on a local unit which I'd needed to force my way onto in competition with a surprising number of punters, I realised I'd managed in excess of 500 miles today in pursuit of a fraction of a mile of track. Despite frustrating crowds, poor weather and feeling a little under par for much of the trip, a decent day out covering bits of the network I rarely visit.