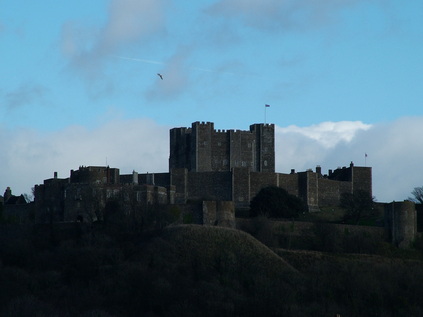 Once again I decided to take advantage of the early connection to London this morning. The variety of diversions and bus substitutions dogging the routes north just made things awkward, and with tours to the north-west coming up in the near future, it made sense to focus my efforts elsewhere. Over the past couple of months I've been drawn again to the south eastern corner of the country. The various little corners and curves are slowly being inked in, and I get to explore the suburbs of London into the bargain. So today's route took me to Dover. I've been here before, once many years ago for a visit and several times passing through the station. However, I've never arrived from the Canterbury direction - and this was the goal. I also got to exercise my strange recent fascination with London bus routes too, as the Circle Line was once again out of action. So after doing the customary 2M06/1A06 route into Paddington before 09:00, I emerged onto Praed Street and made my way to the bus stop which I remembered from my trip in July 2005 in very different circumstances. Soon onboard a No. 436 heading for Victoria arriving in surprisingly good time and making my way to the platform for the 09:33 via the coffee stall - beating my planned schedule by an hour as I'd budgeted for a longer bus trip. Alone in the small First Class compartment, I speculated on my earliest trips to Dover and Canterbury which had been in slam-door units which seemed like they'd be around for ever. Progress of course has it's ups and downs, and I was content to zip over the south London rooftops and into the Kent countryside once again as far as Faversham, where the train divided with the front coaches heading for Ramsgate. We however turned inland and headed for Canterbury, continuing my own strange pilgrimage.

Once through Canterbury East I was on new track. A little winter sunshine and a long time without coffee had left me feeling a little sleepy, as we curved through the unseasonably green foliage and headed for the south coast. A series of tunnels, with strange gothic arched portals which I recalled from earlier trips signalled arrival into Dover Priory, the only remaining station in this town which once teemed with railway activity on account of the ferry port. Being early, I had options here, as my planned escape route was the fast service to Charing Cross which ran hourly. So with time to spare, I decided to walk into town and see what I remembered of the place. Strangely, it was very little at all - and I wonder if I'd spent less time here than I recalled, or whether a decade or so and the success of the Channel Tunnel had really changed the place beyond recognition? Trudged down the slope towards the town with a chill wind whipping around me. Oddly, the street was strewn with old pages from newspapers and magazines - all trimmed perfectly and kept flat, but now whirling around my ankles as I walked. A few I stepped over looked unusual - the typeface reminded me of how papers looked when I was younger. Sure enough they were dated 1987. As I walked and stomped over more of the debris I noted they were all from roughly the same time - at most a two-month window during 1987-88. I imagined some local library with a hole in the roof, archivists running around trying to catch the flying exhibits in a maelstrom of newsprint. Or perhaps some eccentric hoarder had thrown his collection out into the winter wind in some sort of financially motivated despair? I toyed with the idea of collecting some of the pages to study them for links or connections, but the reaction of the locals when I took out my camera to snap the brooding castle high on the cliffs convinced me that I'd probably be lynched for scrabbling around for litter in the street. Walked on, feeling unwelcome and bewildered.

Dover castle broods on the skyline

The town was to get stranger too. Once over the almost deserted ring road via a poorly timed pedestrian crossing and into the town, I recalled nothing of the place. Like many UK towns, the street could have been anywhere - the same stores in the same order. But there were no distinguishing features, no hooks to remind me of prior visits. I weaved through the small crowds moving along the street and found myself in a near deserted market square which had been regenerated to the point it was almost unrecognisable. The only life in the square was in the form of groups of howling teenagers, fighting and screaming as they ran back and forth between rival covens of black clad emo kids and sprawling, wide-trousered, spitting chavs. In fact, everyone in Dover seemed to be shouting. Friends saw each other across the street and yelled raucous, uncouth greeting, people screamed at others to move out of the way or bayed for service in queues. I made it to the point where a pedestrian underpass lead to the waterfront. The street had become a valley of decrepit shopfronts, empty except for the occasional discount emporium or amusement arcades. Feral, angry groups lined the railings and I'm ashamed to say I lost my nerve and stepped up my pace back to the station. Not even a nod to Matthew Arnold, though perhaps I heard enough of the "confused alarms of struggle and flight" in Dover's strange town centre.

Coffee and a bite to eat back at Priory Station soon revived me, and I watched trains until my express service arrived for a swift run back into London, arriving at Charing Cross - perhaps one of my least used termini. Still an hour ahead of schedule, I decided to return to the buses in the absence of the usual routes around the city. Set out into the city, dodging tourists and weaving through Theatreland in search of inspiration. I wanted to head east, into the territory which had been intriguing me recently. Eventually spotted a No. 38 which appeared to have come from Clapton Pond and set about finding it's counterpart heading back east. The buses were diverted however, and it took some walking to find a stop in use which found me not far from Bloomsbury Square and my old haunts. Hopped on board a thankfully warm bus after a short wait, and watched the city crawl by, turning north and passing The Angel and crossing into less familiar lands. Despite keeping one eye on my map, I lost track of the route as we zig-zagged towards Hackney, passing through ragged, overhung Dalston Junction and then bursting unexpectedly into busy Mare Street. Time was pressing now, as the tube back to Paddington was out and I needed to plot a way back to the station in time for my service home. So, having tried to figure out the various routes back into town via the buses we'd passed and having not really settling on a plan, I decided to unravel an earlier walk by alighting at Hackney Central station and stepping it out to Hackney Downs along Amhurst Road. Only a few minutes until the next train to Liverpool Street and then the 205 back to Paddington cresting Penton Mound in the early wintry darkness. Repeated my now regular route home on the 17:00 from Paddington with crowds of day trippers and Christmas shoppers dashing for the platform as I stumbled sleepily into the quiet coach for a thoughtful journey back to Bristol.

A long, varied and rather strange day which kept me guessing. I find myself drawn to London again, lately perhaps more than ever. Maybe it's seasonal - with the winter suiting the city with its pale sunshine and crisp, perfect walking weather?