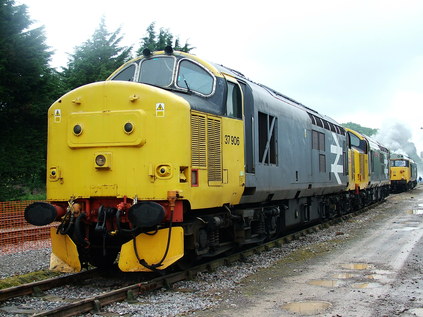 Almost In My Own Back Yard

For once, the weather had turned out as expected and I woke early to a gloomy prospect. Set out for the first train off Highbridge, initially for Bristol. The plan was to arrive early enough for the first of the shuttle trains which Pathfinder were operating to Cranmore station. Time for breakfast before boarding the 07:22 Portsmouth Harbour train. Now these services have always been busy - but at this hour a three-car 158 was only just coping with the number of passengers. Soon into Westbury, a station I rarely visit these days. Good to see some much needed improvements in facilities have been made. Soon started to get busy with enthusiasts and curious locals as 59001 led the stock out of the yard and through the station to return to platform 1 with 66200 at the business end. Found a seat on the surprisingly busy train and settled in for some new track which would take me towards home on a line which would once have made today's journey much easier by ending up at Yatton station. Now however the line is truncated at Cranmore, with a short extension towards Shepton Mallet operated by the East Somerset Railway. The line remains open of course because of the vast quarry complex at Merehead - and today's joint open day had attracted a fair crowd!

Slugs reunited - 37906 and 37901 at Merehead
On arrival at Cranmore, made straight for the vintage buses to Merehead with the intention of getting around the locos while the weather was at least not too wet and there were fewer people on site. The buses too, were fascinating. Lots of local examples from the 1950s to 1970s, displaying familar destinations. It was only as the journey to Merehead started and we began to pass more buses we realised just how many there were! The short journey took us to the railhead, where I made directly for the line of preserved locos visiting. Old friends like 50049 stood beside 'slugs' 37901 and 906 as a British Railways 9F steamed by in the background, making fairly light work of a 1600 tonne stone train. Despite the mud, the drizzle and the appalling light, had a fantastic time exploring, heading into the workshop area where almost all of the Class 59 fleet were present. Also stationed here were some more modern visitors, including the recently repainted 60040. 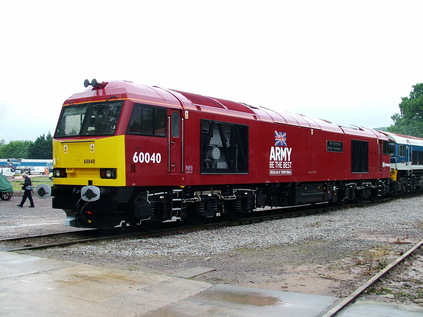 Shape of things to come? Recently repainted 60040
Spent longer than I expected wandering around the site, watching even more locos arrive and manoeuvre within the yard. None of the usual overzealous safety stuff either, and no silliness from the visitors meant that this all worked rather well. Eventually decided to dry off on a coach tour of Torr Quarry. This absolutely fascinating half-hour took us deep down onto the quarry floor, beside the vast 'walking' Primary Crusher and into the terminal where 70% of the facilities stone leaves by train. The whole operation felt slick, tidy and there were obvious efforts to limit the environmental impact of the quarry - something I recall hearing about on the news during my childhood in the area.

On getting back to Merehead, made the journey back to Cranmore on an alarmingly slow double-decker and then walked the short distance to Cranmore West for a brief trip out to Mendip Vale - now the western extent of this line, just tantalisingly short of Shepton Mallet. Not a long or particularly interesting line, but good to have done the track and good to see the ESR's efforts to preserve this little corner of Somerset's rail network. Back onto the shuttle with 59001 leading for the trek back to Westbury and then homewards. Arrived in Highbridge with about 20 minutes to spare before Spitfire Railtours' 'Paignton Pudding' tour blasted through with 37423 at the helm. The fading light made for a rough picture - but good to see nonetheless. 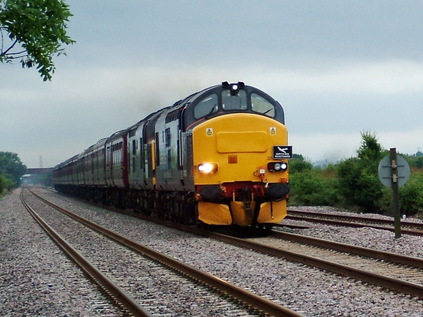 So, an excellent and well-organised day out not really very far from home. The great shame is that Somerset has lost enough of it's rail network to make this feel a long way off indeed - and I'm as guilty myself for not really appreciating or understanding my local area.