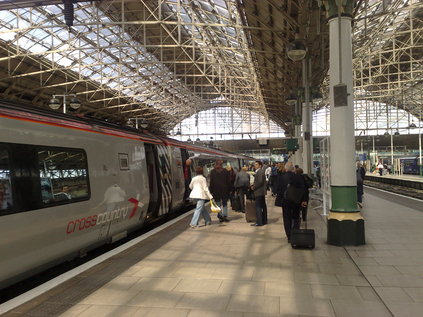 Today saw a lull in the procession of railway-related events which seem to have clustered in the month of June. So once again, a chance to rack up some mileage in pursuit of one of the stray bits of track which has eluded me over the years. These missions have become increasingly desperate and costly, but they get me out around the country for which I'm thankful as a diversion from the current round of oddness at work during the week. Despite having booked the trip a few days back, dithered about going given a tricky day spent in A&E with my little nephew and a broken arm yesterday. But, despite being a little distracted, found myself leaving home early with the promise of good weather and clutching a fistful of cheap tickets for a trip via Rotherham Central and more blue ink in the 'Baker'.

Whilst not nearly as useful as when it started from Exeter and connected easily with local services at Weston, 1M42 remains a useful train. Generally quiet and reliable, this service provides a decent link with the North and a sensibly early arrival in Manchester Piccadilly. Having tried a variety of routes, settled for this one and despite a short connection still enjoyed the arrival at Piccadilly. Despite it's conversion into a modern shopping complex, it still retains it's atmosphere of a real 'big station'. The light, airy trainshed always lifts my spirits and reminds me of early journeys to this part of the world. Today, only here to change trains - made complicated by some platform changing shenanigans and serious overcrowding. As the tanker driver strike starts to bite somewhat, its encouraging to note increased patronage of rail services - but the 3-car 185 working to Sheffield wasn't coping well. By the end of my short journey via the Hope Valley, First Class had been declassified by a harassed guard. Watched the unit leave for Cleethorpes still packed to the rafters before almost getting the wrong train in my haste to move on!

The next part of the trip was the reason for coming up here today - the short section of line which diverges from the Sheffield-Doncaster route at Holmes Junction and rejoins at Aldwarke Junction, taking in Rotherham Central and C.F.Booth's scrapyard on route. This area confused me for years as I sought to untangle the mess of lines and work out which I was actually travelling on. The unit made slow progress out of Sheffield, snaking across the tracks and finally speeding up just a little once off the mainline at Holmes. The scrapyard was impressively large - much bigger than can be seen from the other line - but there was little evidence of rail-related work aside from a line of condemned wagons on the rail connection to the site. Rotherham Central was busier than I expected, a rather modern 1980s building commissioned to replace the much grander but poorly sited Masborough Station. We sat for what seemed like an age at Rotherham before heading back onto the mainline and continuing the busy train's journey to Doncaster where I disembarked. 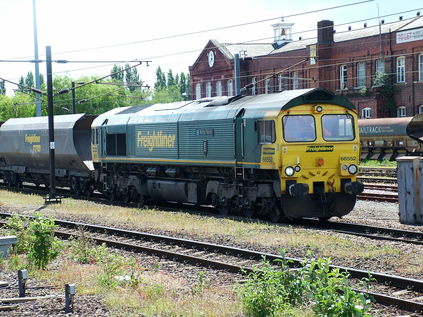 In a sudden burst of sunshine, 66552 'Maltby Raider' passes Doncaster

The plan was to spend an hour or so at Doncaster enjoying the passing traffic before heading home on a Voyager direct to Bristol. Couldn't settle into things and found myself very aware of the normal/enthusiast divide today. The weather also took a turn for the chilly and damp, and I found myself sheltering in shirtsleeves, feeling ridiculous and a bit miserable. Pulled myself together in time for the trip home, which was a really good cobweb-blowing trip through much lighter skies in a quiet train. A strange day - probably much influenced by a very odd week - but a chance to escape which is always welcome. A few interesting trips to various open days coming up, which will be interesting and diverting in equal measure. For today though, a little more ink in the book is always a good thing!