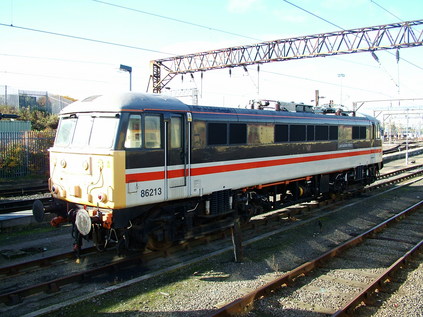 The Silverlink Swansong I

It seemed strange to be getting up so late for a tour, and I almost panicked on a couple of occasions looking at the clock as I pottered around my hotel room getting ready to leave. A leisurely walk to Euston which really only just seemed to be waking up. I'd arrived early in the hope of breakfast and a good look around, but found queues at almost all of the few outlets trading at this early hour. Settled for a big cup of Starbucks coffee to wake me up, and a look around the station noting 90019 on the front of the Lowland Sleeper. No information on our train, but the general tide of enthusiasts toward the Silverlink platforms directed me to 11, where familiar pair 37410 and 37417 were rumbling away in preparation for the trip. Boarded and settled in, with only a minor panic about having no change for coffee - which didn't matter as First Plus seemed to include free refreshments - albeit at a rather erratic frequency.

After a noisy start from Euston, we progressed as far as Willesden TMD where we sat for operational reasons for quite a while. Onto the DC lines now, and soon enough new territory for me once we had passed Willesden Junction Low Level. This is absurdly rare track for locomotive hauled trains, and we made steady progress via the Watford High Street deviation, taking the equally rare link back onto the mainline just short of Watford Junction. With everyone now on board, we made a dash up the line to Tring in order to reverse.

One of the attractions of today was the rather rare visits to deopt lines. I'm informed the planning and safety case for this tour was torturous in the extreme, and that it only happened due to the sterling efforts of Silverlink and Pathfinder staff. With dire warnings not to flush the lavatories on depot property we made our first visit of the day to Wembley. Firstly though we were informed that the Carriage Line was occupied and we'd be offered an alternative. Some grumbling from the back about missing rare track was silenced by the announcement of the alternative - a trip through the shed. We crept into the site, bemused depot staff looking up at us as we passed. A real treat, and some almost unique track into the bargain!

Back to the Willesden area again, and onto the City Lines to climb to meet the line from the High Level station at Kensal Green. A sedate but pleasant trip around the North London Line next, which is still one of the finest ways to see the city, and remains a favourite bit of track for me. Much discussion of the various curves which fall away from the line to allow freight access to other routes - and I confess I couldn't quite figure out which I'd done and which I hadn't without referring back to older records. In any case, finally reached Barking via the Channelsea Curve and Forest Gate Junction, thundering into platform 7 much to the surprise of the locals waiting here. 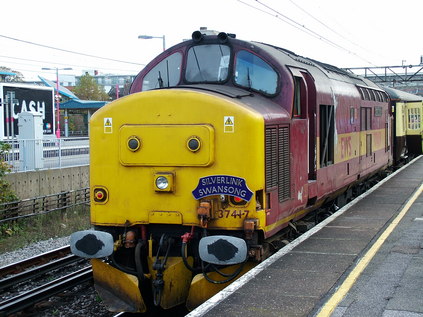 The next run took us along the line to Gospel Oak affectionately known as 'the Goblin'. This line is an excellent example of how community involvement in a local railway can produce results, and despite it's reputation for overcrowding, poor rolling stock and crime at stations, Silverlink seem to have made a real success of it - with further improvements to come from the Overground project. Another fine run along the rooftops of London, as far as Kensal Green where we took the line through the High Level station at Willesden Junction and headed south over the Thames to Barnes and Clapham Junction before turning northwards once again onto the West London Line which deposited us almost back where we started for a fast run up the WCML to Bletchley. 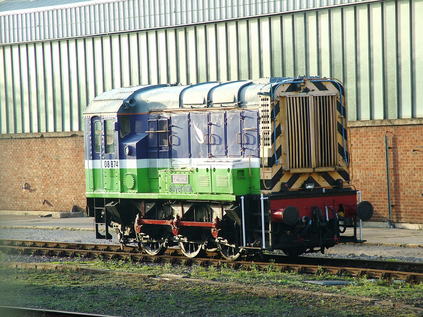 We paused briefly at Bletchley before creeping slowly into the depot, again some curious staff were ready for our arrival, and we noted depot shunter 'Catherine' outside the shed, ready to assist our train. After a brief stop for staff pictures, 08874 was attached to the front of our train, and we returned to Bletchley station for a photo stop with the real Catherine (after whom the shunter is named) posing beside her namesake. When the complexities of splitting Silverlink into it's constituent Overground and London Midland components is done, Bletchley TMD will almost certainly close which will see the end of a tradition of railway employment in the area. Despite the positive changes in the industry at present, there are some sad times ahead for some.

Soon ready to depart once again for a spin along the Marston Vale line to Bedford. It soon became apparent that we'd been allowed far more time than necessary for this part of the itinerary, and we sat outside Bedford station near the River Great Ouse for twenty or so minutes before heading in, making a swift reversal and retracing our steps. However, before reaching Bletchley we climbed away from the line to the station and onto the flyover. At this point, the collective assembly of track bashers fell silent as for many of us this was the highlight of the day. We climbed sedately onto the impressive concrete structure, built to secure the future of the East-West line which was done away with by cuts a few short years afterwards. A gentle curve over the WCML then a much longer run along the former Oxford route than expected to Swanbourne Siding - now a reversing point for stone trains, but formerly an important cross-country route. Realised that I'd now covered both ends of this bit of track, to Claydon in the west and now to Swanbourne in the east. It must surely be time to consider this line's utility again? Despite the darkness and the cool November night, lots of people were hanging out of windows as we crept along the branch - the first passengers here for many many years, treated to an impromptu firework display by the locals! After reversal, back across the flyover and a curve to the left to descend to Denbigh Hall South Junction and regain the mainline. Another quick run now to Northampton, passing through the station and heading into the ultra modern new Siemens depot at Kings Heath - built specifically to maintain the fleet of Class 350 'Desiro' units which provide local services between Birmingham and Euston. Amazed at how clean and orderly the place seemed in comparison to more 'traditional' depots we'd visited today. The rows of quiet units were almost eerie in the quiet dark sidings. Another reversal, secure in the knowledge we'd been where no other passenger train had!

Our final leg was a dash back to Euston. Our locomotives performed superbly, but a possession on the slow lines meant we didn't get to cover Kilburn Up and Down Goods loop. However, this meant a high speed run along the fasts, with a spirited arrival at Euston as the driver let off several blasts on the horn and treated the station to a noisy taste of thrash. A cracking day out thanks to Silverlink and Pathfinder, where so much could have gone wrong but didn't. Much will change on the railway map in the coming months, but with dedicated people who can organise this kind of trip in the industry the future looks optimistic.