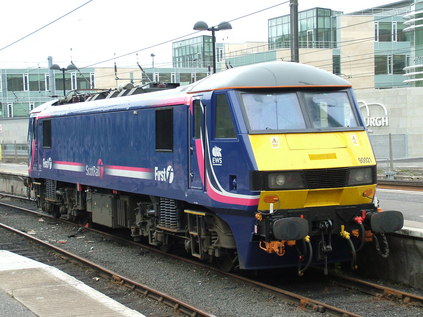 Back in February, the McBuffer Puffer railtour gave me a unique chance to get to lots of locations in Glasgow which I'd probably not normally have readily visited. I combined the tour with a weekend of bashing local branches, the need to complete this resulting in yesterday's escapades around Whifflet! Today, it was time to do the same for Edinburgh. I've often neglected Edinburgh - finding it expensive, pretentious and predominantly focused on providing a Scottish 'experience' to tourists. Not unlike Bath in my own local area. A couple of stays have cured me of my cynicism to some extent - but it's still very much a second cousin to Glasgow, my first love!

Literally just had to pop downstairs from my hotel to the concourse of Central Station, which was a good thing given my lack of coordination this morning. Queued for coffee at the one outlet on the station open prior to 0600 as I'd discovered back in February. The plan was the first Voyager to Edinburgh - I hadn't noted that this took the route via Shotts non-stop which made for an interesting diversion. Stumbled out of the train feeling rather lacklustre and below par at Haymarket. Blundered up and down stairs and finally found more coffee and the correct platform, positioning myself for a spin around the Fife Circle. The first part of the route over the Forth Bridge was familiar from journeys to Aberdeen over the years, however at Thornton South Junction we peeled off and headed west once again to Glenrothes with Thornton. A fairly hard-to-get link back to the line to Aberdeen heads east here, completing the triangle - but this will have to wait for another visit, forming one of the few bits of Scottish track I need to seek out in future. Good to see well patronised stations from Dunfermline into Edinburgh too.

I suspected that this service would continue to Waverley despite being advertised as Edinburgh, but sure enough as we approached Haymarket we swerved towards the northern side of the station, and terminated at the newly constructed Platform Zero! A bit of bonus track, and a short hop over the bridge to the next move - along the Bathgate branch. Not the most interesting journey out via the rather bleak suburbs, but I'll confess that the town itself looked busy and interesting, as befitting the home of a minor celebrity who is revered by myself and a number of colleagues! Eventually, the line to Bathgate is earmarked to be extended to Airdrie, completing an electrified link between Glasgow and Edinburgh. Good to visit the branch whilst on its current alignment, which will need to change quite drastically here to accommodate the extension.

Through to Waverley on the return, with a brief walk up the confusingly newly designated Platform 1 to get the unit out to Newcraighall. This trip is short, and at this time of day seems to serve almost no passengers. The brief glimmer of hope it presents is the possibilities of reopening further along the alignment to Tweedbank and Galashiels in the future. Disappointingly the current extent of the line terminates enticingly close to but certainly out of sight of Millerhill Yard, and somewhat in the middle of nowhere. Watched the unit shunt out of the station, and back in to take us into the Capital, happily carrying a few more passengers this time.

The last branch left to cover was the longer trip out to North Berwick. I missed the chance to cover this when it was operated by Class 90 locomotives, and now that the Class 322 units have returned I regret this. Noted 90021 tantalisingly close to where its classmates formerly stabled at Waverley when working the North Berwick route! The first part of the trip provided a more sedate run along the first part of the East Coast, calling at a number of smaller stations before branching to the north to approach the small town of North Berwick. Once again, no time to waste before turning around and heading back to Edinburgh, which is something of a shame because I liked the look of the station and would have enjoyed exploring the place a little more. On the return run, noted the junctions for the remaining freight lines in the area, and can't help but hope for some sort of tour in the area soon to cover them.

On arrival, time to shop for provisions before heading for the longest run of the day down to Derby. Found a seat with some difficulty (I'm assured the other unit of the pair assigned to 9O26 has more unreserved seating - I just hopped on the wrong bit) and settled in for the run down the East Coast via Leeds. Once again, excellent service and a fairly speedy run in increasingly fine weather. Amazingly hot on arrival at Derby, and the Central 158 was perhaps predictably boiling and rather full of commuters. The line to Crewe via Uttoxeter - which I haven't travelled for maybe twelve years - hadn't changed much, and despite the sweletering conditions it was good to experience a change of pace on an otherwise rather hurried day.

Checked in at the always comfortable Crewe Arms before heading out for a curry. Spotted Pete Waterman wandering around - two celebrity sightings being far more than my usual quota for a trip! Time for a good long sleep before another early start.