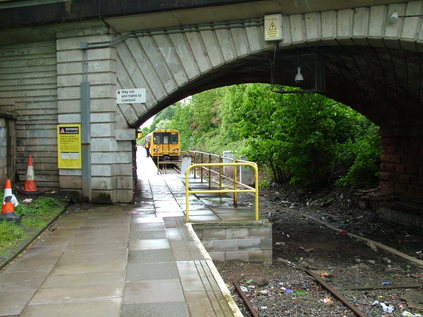 Returning to work this week has been, at best, turbulent. Lots seems to be happening, but there may yet be casualties and that's never pleasant. Felt the need to be elsewhere, and was drawn as ever by the West Coast which seems to offer easy opportunities for long trips - especially now 1S42 is going as far as Glasgow again! The only limit was spending a sensible amount of money. A refund from Wessex Water helped in that respect, so settled on an expedition to cover some of the commuter lines in Merseyside which I've not yet explored. Somewhere along the way I figured out a route which would take me on a circular tour via Wigan! Out on the trustworthy combination of 2M02 to Weston, then 1S42. Settled into the Quiet Coach, had breakfast, and relaxed. The train remained fairly quiet as far as Birmingham, and even then Coach F was an oasis of calm on an otherwise busy Voyager! Nothing much of railway interest south of Crewe, so worked on the laptop a little and lazily window-gazed. Good to be out and about again, after feeling rather restless last week.

Noted 33025 at Crewe with curious 'Minimodal' branding on otherwise shabby ex-DRS livery. Missed much of what was at Warrington by complete accident. After a quick and trouble-free run, it was time to alight at Wigan North Western. Not long allowed for the change so dashed out of the station, slipping and skidding my way under the rather leaky underpass, over to Wallgate and practically straight onto an unrefurbished 142 heading for Southport. The train was fairly well loaded due to the cancellation of the previous service thirty minutes previously. New track from here for me - a slow but pleasant journey through the Lancashire countryside with frequent stops. The stations were fairly well used, considering it was Saturday lunchtime. The only slight irritation was a bunch of students from Manchester - while half of them seemed happy to just read or look out of the window, the others seemed to think that the train needed a display of their puerile and cruel humour. This, folks, is the future of our nation. I'm not usually one of the 'this country is going to the dogs' brigade - but I'm sure we'll be lacking decent comedians in a few years time.

Arrived at the impressively proportioned Southport station exactly on time. I counted six platforms in use, roughly half of which serve the line to Wigan, and the other half the electrified Merseyrail lines to Liverpool. The length of the station, its impressive size and its overall roof are testament to it's former importance as a holiday destination. I'm told that it's still well-used in the Summer months, but a damp Saturday in May is perhaps not the best time to visit. I'd decided to press on southwards from here quite soon, so only stayed long enough to have a quick poke around the station and to buy a ticket to Kirby.

A little sunshine appeared as I boarded the recently refurbished Class 507 unit. We were soon off, heading along the coast towards Liverpool. Through the golf courses around Birkdale and by the former Hall Road depot. Lots of stops and an impressive number of passengers using the service. Should, technically have changed in the opean air at Sandhills but decided to cover a little extra track by heading underground into Moorfields. I've never used the deep-level lines under Liverpool, due to the ever-present fear of escalators. Reasoned that a cross-platform interchange would be possible, and also decided to check for stairs for any future trips. Found both were fine, so now I can travel safe in the knowledge that at least one Liverpool underground station is accessible for me! The station at Moorfields is something of a relic of British Rail circa 1980 - lots of beige plastic and tiling. Almost comforting to see in fact! Changed onto another 507 and headed back out into the open for the short trip to Kirby.

Kirby and Ormskirk stations have always fascinated me. On the map the route is broken indicating that there is a service from Liverpool, and one from the other direction - but that nothing runs through. Having read more, I understood that there was a physical barrier in the form of buffer stops at both stations. It's always seemed an odd, inflexible arrangement that has more to do with cost-cutting and penny-pinching than technical problems in terms of electrification. Arrived, and bought my ticket for onward travel. Marvelled at the apparent pointlessness of the arrangement at the station.

The buffer stops at Kirby station, from the Wigan line end of the platform.

Here, a fairly frequent service from Liverpool funnels into an only hourly service to Wigan Wallgate. Timed my trip so I'd only have a wait of around fifteen minutes or so. Onto another refurbished 142 which again stopped at all stations. Very little business however, and I can only think that if this was a through service from Liverpool it would be more attractive to passengers. Entertained all the way back to Wigan by three potential pop-stars with strong local accents who auditioned and preened their way to our destination. Secretly decided they could form a girl band called 'The Sisters of Mersey'! When asked by a fellow passenger if they were 'wannabes' the most vocal (and least tuneful) of the group announced "I'm not a wannabe - I'm, um.. actually IT!". Coming to a TV screen near you soon, no doubt.

Back at Wigan in fairly good weather, so explored for a while. Seems a nice enough little town with a busy centre. Found a bite to eat and while returning to the station noted a sign pointing to 'Wigan Pier'. Followed it, and found myself in what was a fairly dull retail park. Not sure what I was expecting, but returned to the station rather than hang around. My homeward bound Voyager arrived a little late, and waited at Wigan to take on water - lots of 'steam train' quips in our coach. Soon enough on our way again, but we didn't manage to make up the lost minutes and I arrived at Bristol a little too late for the 17:55 stopped. Only a short wait for the 18:15 HST however. A low-key but interesting day in Merseyside - and lots of track left to do up there too. Good to get out again, with my week away feeling like a distant memory!