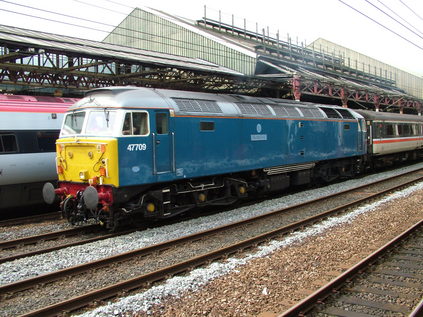 The last day of a rover is never easy. In the past I've tried a few tactics - erring on the side of caution and coming home on day six in order to use the last day as a bonus, or planning some elaborate route which has gone belly up at the first hurdle because it's Sunday and the network is in engineering related chaos! I was determined that this time, neither of those things would happen. Awoke later than planned which frustratingly meant that I missed the one chance of eating the breakfast I'd paid for this week. Still, a good sleep was no bad thing. Marvelled at the excellent room I'd got - a spacious corner room with views over two aspects of Nottingham. It was a misty and damp morning out there, but the view was still impressive. Packed and prepared to check out. The plan was to take the first train of the day to Liverpool. Only a short stretch of new track between Warrington Central and Allerton, but new track nonetheless. This service would take me up to Sheffield, throught the Hope Valley, into my near regular haunt at Manchester Picadilly and finally into Liverpool just after lunch. Hoped that this would be a rare chance to enjoy this Central route without being wedged solid into a two-car unit. Despite being Sunday though, it was still a busy train.

The trip started very well, with an unexpected journey to Attenborough Junction and thence via Toton Centre towards Sheffield. Didn't have my wits about me, or the correct angle to achieve much at Toton - but good to maintain the traditions of a rare East Midlands curve on the last day of a trip! From here, some very slack timings with exceptionally early arrivals at most of our stops - most notably Stockport where there was time for most of the passengers to walk over to the Quicksnack and back with minutes to spare before we set off. Finally descended on Liverpool in time to see the city preparing for its Victory parade. Realised with a mix of embarassement and horror that I had no idea what had been happening in the real world for the last week - and certainly had no idea of who had won the FA Cup!

After a reasonably long wander around Lime Street and attempts to settle my toothache, I boarded a Pendolino for the short trip down to Crewe. A pleasant enough ride and some nice staff made the journey go very quickly. Only a short wait planned at Crewe, before a swift change onto the near-legendary 1V61 meaning an uninteruppted journey back to Bristol. Noted the train slip back by a few minutes, so had a wander around the station. Surprised by the sudden and speedy passing of 47709 and 47712 on a rake of empty stock, presumably from one of yesterday's footex specials.

47709 hauling an ECS working through Crewe

The next few minutes were some of the most active in terms of railway observation of my whole holiday, with 66231 propelling a rake of wagons into one of the far platforms, shortly before 67021 cruised quietly into platform 1 with more empty stock, and stopped - and causing my train to be switched onto platform 5. Once the Voyager arrived, settled in to my First Class seat and rested. Soon awakened from my dozing by a young lad travelling alone and put on board by his doting and worried grandad at Crewe. He was going to Tiverton and seemed genuinely disappointed I was not travelling all the way. Spoke quite a bit about railways, and his particular interest in computer simulations of model railways. Tinkered with some of the games on my laptop for a bit and chatted about forthcoming steam workings in the South West, and soon enough we were rounding the curve at Stoke Gifford.

So, finally out onto a cold, damp platform at Temple Meads one week and over 3000 miles later I was almost back where I started. The stopper to Highbridge was jammed with passengers as far as Weston and I was glad to get off on home turf. I confess that the first destination was my local, to catch up on gossip and examine the recently completed refurbishments. It's always good to come home, and it was particularly comforting to come home to my new place after my first week away from it, since is so much more welcoming than my old flat. But I still can't wait for the next trip...