Another Wet Weekend in Wales

Stayed reasonably local again this weekend. Since huge crowds were expected for the Tsunami Relief Concert at the Millenium Stadium, decided to see what Arriva Trains Wales would provide in the way of additional capacity.

Arrived at Newport at around 0930 to find quite a crowd of 60s and 66s on Godfrey Road. Cold but dry start to the day, with five passing freights in the first couple of hours, and a steady stream of the usual units and HSTs.

Things started to get very busy around lunchtime, soon after a couple more members of the infamous 'Gang of Four' arrived on the scene! I'd figured that the concert should be starting at around 1500, and around midday, crowd control and revenue protection swung into action. Huge queues to get into Newport station - and severely overcrowded Cardiff bound services. To compound things, a unit failed between Newport and Cardiff - which eventually returned to Newport and was abandoned on a very damp up through line. To make things even stranger, the staff decided to override the automatic announcements because of the overcrowding, and a guy with a voice like he'd inhaled helium began barking instructions for the next train to Cardiff!

60079 passes the failed 158853 at Newport
Things stayed busy, with packed platforms and very wet people queuing right up to around 1445, when it became very quiet indeed. Things remained busy on the freight front, and lots of action was to be seen on Godfrey Road. Industrial action on Central Trains services meant some further weirdness - with a somewhat unpredictable pattern of services and some unusual units visiting. Also noted most of the Wessex 3 car Class 158/9s visiting during the day - including 965, 966 and 967 which were all new to me. By popular request, I've added a list of which units make up the 3 car sets here on the site. 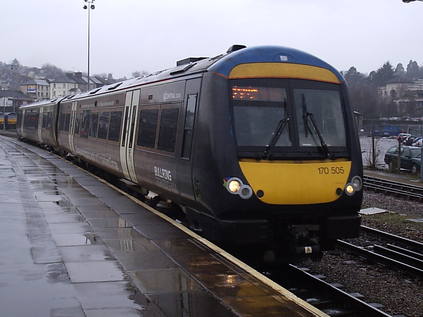 Had a very damp walk around to see what was at the back of Godfrey Road - predictably, the locomotives at the front moved minutes after we returned, dripping to the platform! Having seen 158961 head down to Cardiff earlier, decided to wait and catch it on the return to Bristol. Arrived home cold, wet and tired, but as usual an entertaining time at Newport.
Movebook Link