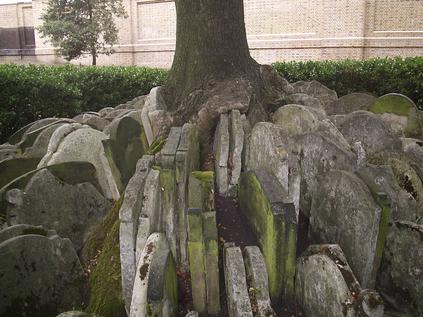 Walk Four - Back to the Boundary

Up early after a refreshing night of sleep. Checked out of the hotel, and enjoyed my customary replacement breakfast on Southampton Row. Had planned two objectives for today.

The first was to visit St. Pancras Old Church. This is where the young Thomas Hardy was charged with the task of disinterring and reburying the dead in conjunction with the construction of the Midland Railway. Strangely, the works for the Channel Tunnel Rail Link are now on the same site, and its easy to imagine Hardy at work here. He is commemorated by a tree, surrounded by some of the tombstones moved to accomodate the railway.

The Hardy Tree in St. Pancras Gardens
Spent quite a bit of time at the church, stumbling across the monument to William Godwin and Mary Wollstonecraft, and the Soane family tomb, which reputedly inspired the design of the old red Telephone Box.

Leaving the churchyard, I plunged headlong into the mess of work sites for the Channel Tunnel Rail Link, and found myself picking my way along the authorised walking route between deep pits, flooded gullys and streams of competing, diverted traffic. I still fear that the quite amazing station building at St. Pancras will be wrecked by all this work. Finally struggled out somewhere near Kings Cross and struck out east for my next objective.

On Pentonville Road and City Road, I realised I was again walking the boundary - a narrow band between the end of the City and the beginning of the suburbs. A place where people are trying hard to get in or out, but rarely want to stay in the same spot. Everything seems to come to a head at the Angel, where suburban Islington meets the edge of the City in a mess of traffic and wine bars. A relief then to swing north onto Colebrook Row (once the home of Charles and Mary Lamb) in search of the Regent's Canal. Wandered along the pleasant, quiet, almost rural row of cottages built along what was once Myddleton's 'New River', and which is now a long narrow stretch of parkland. Quite accidentally stumbled across the eastern mouth of Islington Tunnel.

The canal is an oasis. Calm, quiet and soothing (despite the appeal for witnesses to Actual Bodily Harm on the tow path gates). Walked as far as the lock at the entrance to City Road Basin. 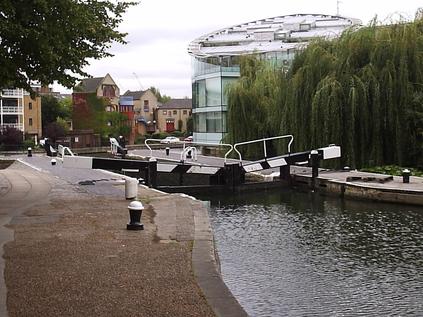 Lock at City Road Basin
The canal is also a boundary in itself, forming an arc around the northern fringe of the city, from Paddington to Limehouse. An impressive achievement overall. Eventually turned back towards City Road. From here, crossed into the strange boundary lands once more, pressing along Spencer Street (full of students registering at City University) and Myddleton Street - home of the Family Records Centre, into Exmouth Market. Settled down with coffee and watched the always busy street for awhile.

So, walk over I headed for Farringdon and then to Paddington. When I surfaced from the underground, it had begun to rain and all was rather grey and dull. A very pleasant, tiring and oddly challenging weekend. Time to start planning for next time.
Movebook Link