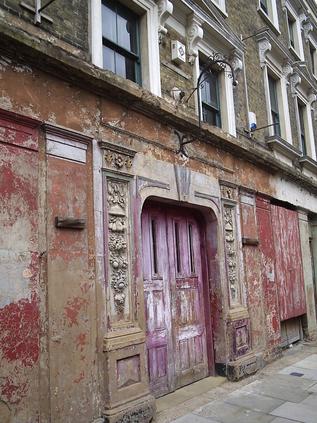 Walk One - The Preliminaries

A sluggish start to the day. Finished packing in something of a hurry, and out to catch the 0912 to Bristol. Time for a decent coffee, then onto the 1010 to Paddington. The same loud bunch of homeward bound Londoner's followed me from one train to the next, finding their way into my coach too, providing for some high volume entertainment on the way. Arrived in London feeling tired and disconnected. Straight to the usual hotel, checked in and headed out.

The first afternoon is always odd - quite an adjustment to make. Reminds me how quiet a life I have at home. Plunged headlong into the maelstrom, with a long and not very well planned wander. It sort of ended up going from St George's church in Bloomsbury to St. George-in-the-East at Shadwell, but didn't quite make it. The route was a very strange one, but sort of described a boundary between the City and the less salubrious borderlands.

Walked quite a way, along Old Street and Great Eastern Street, ending up heading south though Shoreditch. Noted the East London Line extension works, and the remains of the Bishopsgate Goods Yard site. Sheltered from the rain in the Golden Heart, a refreshingly normal pub in the strangely fashionable neighbourhood. A couple of pleasant pints, then on southwards. Inexplicably felt the need to get to the river. Over Whitechapel Road and into the mess of tiny streets between Cable Street and The Highway. Stumbled accidentally across the remains of Wilton's Music Hall.

Wilton's Music Hall, Graces Alley
Reached The Highway. Never a comfortable street for me. Decided to head back to civilisation, and turned west again. Arrived back in the city at Tower Hill, and found All Hallows church open. Wandered in for a rest in the cool and quiet. A long walk back, seemingly against the tide of escaping City types, who had gathered in huge groups in Leadenhall Market. Exhausted and relieved to get back to the hotel. A strange outing really - felt like I was walking an uncomfortable line between the affluent and the struggling all the way. My painful foot, buzzing head and strange attitude didn't help the feeling of tension. Noted that despite not eating all day, I never let myself feel hungry until I arrived back in the City. As ever, reading too much into the territory. A strange start to what might be a very curious weekend.
Movebook Link