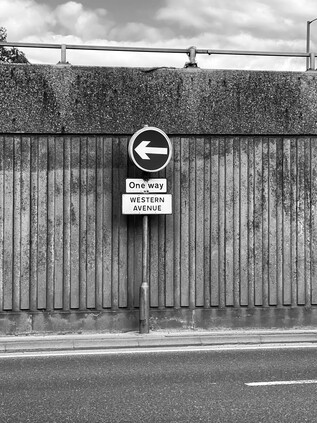 This fragment was nothing more than a placeholder and an image gallery. It spoke of intentions, expectations and sadly, presumptions which would be unfulfilled. The memory of it is stronger now, not least because of the intense aerial coverage of the Royal Family on their journeys to and from RAF Northolt, including of course the final journey of Her Majesty Queen Elizabeth II into London.

This was a return to the epic walking into London trope which I'd begun five years ago when I was thankful for being able to continue my walks despite challenges at home. I'd worked my way through the routes - from the A1 to the A5, and had even ventured along more symbolic routes such as the arrow-straight line of Watling Street south of the Thames. I'd varied my approach, taking both the A10 and the original route of Ermine Street - now the A1010, and at the end of 2019 in the shadow of an unwanted General Election, had walked the Uxbridge Road in an effort to exorcise Boris Johnson. Along that walk, I'd been struck by how this original route out of the city was shadowed by the mighty A40, a modern trunk road which seemed unwalkably hostile in its western reaches and uninspiring in its ending on Oxford Street. But the desire for a long walk in late-summer weather persuaded me to head out to Ruislip to start walking in a western arc, via West Ruislip, Ickenham and Hillingdon - all places I could have begun walking, but I wanted to make the transition from suburb to outlying village, and then into the canyon of concrete which sped towards the city.

The walk was oddly captivating and remains a memory I reach for involuntarily when I think of my travels. The warm morning, a threat of showers passed, and the surprising rural scenes beside the road. The stately elegance of the Polish War Memorial, and the equally impressive scale of the road signs I passed under on the slip roads. The recollection of passing from the strange landscape of Hillingdon with hills rolling into the distance beyond the elevated station, to the broad curves of Western Avenue as it snaked around the suburbs and industrial areas of Perivale and Alperton. The final stretches were dusty, grey and modern, carving bleakly through divided western suburbs, a monument to more ambitious planners and less empowered communities. Finally, I was pushed aside by the leaping viaduct of the Westway, forced to navigate a maze of Notting Hill backstreets which were peppered with small restaurants, ironically nostalgic laundrettes and a forest of refuse bins at each gate.

I decided not to walk the route to its conclusion in the City - I'd done so many times before, and it would be a tiresome, slow slog through the crowds of shoppers beginning to emerge again. Instead, I approached Paddington via stucco-lined backstreets and isolated bus stands. This walk really did deserve a better-researched and written piece, but it fell into the malaise of dismay as the virus surged once again and our fortunes shifted again.

The photographs tell the story well enough, and many of the territories visited have been crossed before. What you won't get is the thrill of recognition when I approached a landmark from a new direction or realised how seemingly distant parts of London were linked snugly together. That was, perhaps, the spirit of this walk?