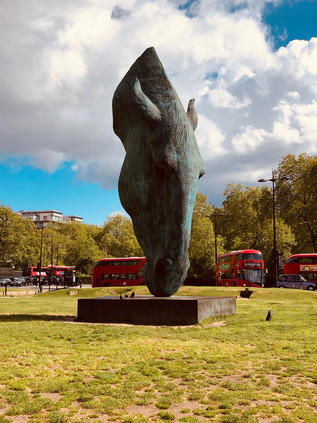 Fragment 4: London Ordinal - The A5

This fragment dates back to the Spring of 2019 - which seems like a lifetime ago. I had completed the London Ordinal walks, heading into the city along each of the ordinal routes, via a walk along the A5. As it was a shorter walk in some respects, I'd started a little further out of London. It was a surprisingly engaging walk considering I'd been concerned about the potential for a dull slog along familiar streets for a good part of the way. On my return though - I struggled to manage the idea that I'd actually completed something. I'd set out to walk each of the routes as a sort of thanksgiving for being able to continue my perambulations despite the financial challenges we faced at the turn of the year - and now it was done. My projects usually foundered, or were paused indefinitely when my attention wandered - but for once, I'd done exactly what I set out to.

The shock of this, along with the challenge of finding the next target, conspired to throw me into a spin. The write-up of the A4 walk had been long and somehow draining to write - not unlike walking the route. I was now without the same opportunities to commit time to write, and the piecemeal attempts to compose were stalling. Perhaps I'd finished more than just this project? Thus, the prospect of completing what I'd begun to write about the A5 became rather daunting. Committing to an ending wasn't my style. I was more worried about finding my next walk amongst a scrappy range of potential routes I'd been desperate to do when committed to a plan, but now couldn't seem to begin.

I did of course return to walking - and to writing, and this project faded into unconsidered obscurity. This fragment starts in Radlett, immediately plunging far too deeply into the detail, and seemed likely to meander considerably in defiance of the straight line of Watling Street. It stutters to a stop before reaching Elstree, hemmed in by the M1 and the A41 carving in from the west, and the last resting place of Nicholas Hawksmoor in nearby Shenley. The prospect of writing this landscape was just too daunting.

When a project ends, it stirs all manner of disquiet. Was there really any point to this?

It's almost a century since the roads of Britain were first classified. Tamed into a network based on their prominence and strategic importance, the messy web of routes had - for the previous two decades at least - grown to meet the need of the emerging motorist. There were now enough cars and commercial vehicles on the road, making complex enough journeys between towns, to necessitate some sort of strategic approach beyond the County Council-sponsored fingerposts at the junction. The zoning and numbering of roads across Britain was the act of a determinedly modern post-war nation which was tooling up for the years to come. Arterial routes and bypasses emerged, carriageways were dualled and serious thought was given to the idea of express routes. Another great war and its comet-tail of economic depression would, of course, stamp itself squarely onto the country, squashing flat the ambition to improve the road network. When we emerged into the 1950s it was with optimism and drive, but little hard cash with which to engineer the kind of roads we needed. So, long-travelled lanes were upgraded, junctions were layered with signals and lights to help them resist growing traffic and even venerable Roman routes were pressed into greater use. The British road network lacks the impressive sea-to-shining-sea breadth of the US Interstates and can't touch the precision-engineered infrastructure of Central Europe's tunnels and bridges. But it has a surprising feeling of permanence and persistence: a sense that whether walked, cycled or driven, the user is part of a long story which isn't nearly finished yet. I set out on my last excursion in this short series with this in mind.

Leaving St. Pancras on a near-empty train which has departed, unexpectedly, from the open-air platforms on the upper concourse, I'm approaching another ending... When this year began on a cloudy, cold day in Hertfordshire I felt lucky just to be walking. The existential threat of a grim winter facing all kinds of difficulty and confusion was still reverberating in some sense. But for now, I was still out here pounding the footpaths and byways and it seemed fitting then that this trip would take me almost full circle - back into the leafy Home Counties north of London. I'd originally planned to disembark at Elstree and Borehamwood - the same place I'd thankfully set boots to tarmac back in January with a new project in mind - but the weather was fine, the day felt long given a relatively shorter planned walk ahead and I was keen to start from a new point. Radlett was unknown to me besides zipping through its station on the final approaches to London, knowing that the sometimes dull passage of the Midland Main Line was about to get interesting as the railway fell into step with the M1 and carved through the suburbs. Little did I think when I last flew by using Radlett as a marker that I'd plan to walk those last miles. But Radlett occupies a strategic location on what was - but now very much isn't - the A5, which was my focus today.

It is still, however, Watling Street and a short walk from the rather sleepy station took me onto the long, straight High Road which formed the spine of the town. Radlett radiated respectability and unaffordability in equal measure. The strong morning sunlight reflected from the road surface, winking back at me when it hit the shine of new cars nudging into roadside parking to access Budgens, Costa or the Synagogue. The little town, named for a crossing where roads met the ancient trackway to the north and west, was waking up on what seemed to be a very comfortable weekend morning. 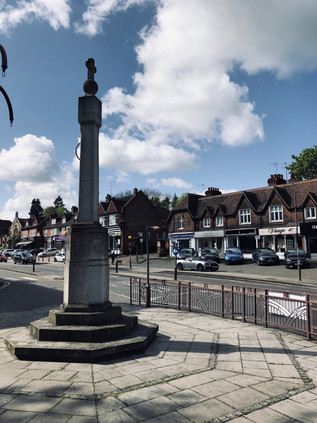 Radlett hadn't always enjoyed the reputation of quiet, respectable affluence it now possesses. In 1823 it achieved notoriety for the brutal murder of William Weare by John Thurtell. It is speculated that Thurtell owed Weare significant debts from gambling on illegal boxing matches and with no means to meet them, conspired instead to lure him into the countryside and shoot him. Invited to dine with him and his friends, Weare was ambushed on Gills Hill Lane and shot in the face. When the shot failed to despatch him Thurtell wrestled him to the ground, slit his throat and dashed his brains on the road using his pistol. With the body hidden in a nearby pond, Thurtell and his friends celebrated by singing and drinking. They later decided to move the body to a deeper lake in Elstree. The case was swiftly solved when the weapons were found and the pistol identified as one of a pair belonging to Thurtell, and such was the publicity that foreman of the Grand Jury William Lamb (later Prime Minister Lord Melbourne) despaired of a fair trial for the trio of conspirators. The gallows were already being erected when Thurtell's trial began, his accomplices William Probert and Joseph Hunt having cooperated with magistrates. He was, not unexpectedly hung in January 1864, soon after entering notoriety in contemporary ballads. Hunt's sentence was commuted and he forged a new life in Australia following transportation, while Probert was exonerated only to fall into a life of crime and later be hung for stealing horses. Despite being a discreet town encircled by the stranglehold of the Metropolitan Green Belt, Radlett still thrummed with the tension of the outer suburb. Curtains twitched as I passed by, and drivers took second glances at my unfamiliar face in the street. It was a town where anything out of the ordinary would still cause alarm. Safe and well-to-do, but poised on the brink: rehabilitated into respectability but mortally aware that its reputation is staked on remaining unknown and unremarkable. I rather liked the walk along the straight Roman high road passing the church with its haphazard lych gate. Radlett teetered on the edge of the high ground surrounding North London, a ring of low deprivation and high income which feeds the city with workers, and withdraws its wealth into the surrounding districts, reversing the natural flow of the Thames' tributaries. It felt like a good place to start walking...

All of the routes I'd hobbled along over the last few months of this strange project had seen change since their initial designation - some widened into almost-motorways or re-routed into concrete chasms to avoid ancient bottlenecks - but the A5 had suffered a far greater indignity. It had been entirely erased. As Radlett dwindled into its last few cottage outposts, the street name confirmed things: this was Watling Street. After arriving from Kent on the route of the A2, and a long lost and indistinct crossing of London, the route strikes out north and west towards the Midlands. A direct, diagonal slice across the map which had amazed and enchanted me as a child. This direct route had been defined by ancient Britons, fettled and improved by the Romans, and in parts adopted by Thomas Telford as his mail coach route to Holyhead and Ireland. But there was a problem with the modern A5 - it didn't actually go anywhere useful nowadays. After leaving London on the reverse of the route I was now walking, the A5 ploughed through the home counties to reach St. Albans which had been the strategically and economically important Roman city of Verulamium. Beyond St. Albans, the route skirted Dunstable and Luton, avoided Northampton and dodged to the north of Birmingham, not striking another substantial population centre until Shrewsbury. This made the route attractive for the development of new towns, with Milton Keynes and Telford both appearing and growing alongside it during the 20th century. As the strategic importance of the route had faded, this southern stretch of unimproved, rather old-fashioned rural A-road had been redesignated as the A5183, with London-bound traffic encouraged towards the M1. I decided that I'd break my unwritten rule... 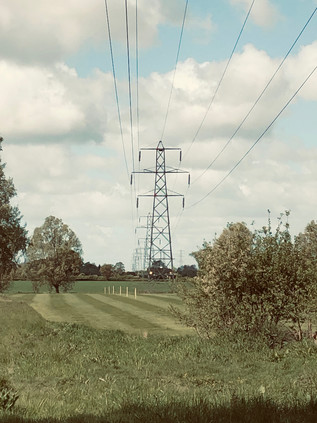 There are more images from the walk in this gallery.