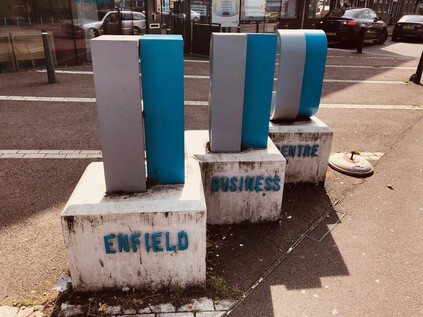 There is far less excuse for this fragment lying incomplete, dating as it does from the tail end of Summer 2019. Looking back, that feels like a strangely gentle time in the world - though it was already a bubbling pot of future horror: looming and contentious US elections, the last desperate flaps of the dead Brexit fish, and interminable local politics. I remember little of the motivation given the time which has elapsed since I struck out from Liverpool Street that morning, but I clearly wanted a walk in the northeastern corner of the city and was looking for an excuse to visit Waltham Abbey. Despite my incomprehensible notes which indicated a plan to write around the link between the last resting place of King Harold Godwinson to our excursion to the statue of Edith and Harold at St.Leonards, I'd written nothing - and all that is here are some rather drab pictures of a slog into London from the fringes. 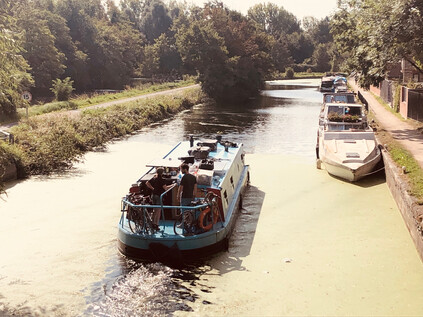 The walk out to Waltham Abbey was long and hot as I recall, and I thought I'd maybe extended myself too far until the abbey appeared squat and ancient in the middle of the small town. After a visit to Harold's grave site, I returned to the larger centre of Waltham Cross, turning south onto the pedestrianised precinct which eventually became the A1010 - the former route of the mighty A10, and of course historically, of Roman Ermine Street.. The M25 enters Holmesdale Tunnel here, with a long linear park filling the tell-tale gap between Waltham Abbey and Enfield, on land which was formerly market garden territory.

Once into Enfield, the road assumes the rather forlorn appearance of a once mighty artery now reduced to secondary importance. It becomes a string of localities, with little to distinguish them: Turkey Street, Enfield Highway, Freezywater - aside from the effort which the Borough has gone to in supporting each little commercial zone with maps, signage and 'welcome' signs. I dread to think how many of these tiny concerns managed to ride out the pandemic - though perhaps our collective 'staying local' helped some of them. The route crossed a good deal of familiar territory too - the valleys of the Turkey Brook, Salmon's Brook and Moselle, and the unnatural chasm of the North Circular. I stumbled through Edmonton Green and Stamford Hill, arriving at the gates of Abney Park Cemetery - its usual freight of local walkers and goth denizens in evidence.

The remainder of the route was the familiar and much-trodden road into London - Dalston Junction, Kingsland Road, Norton Folgate - from desolation to gentrification, from market stalls to artisan street food. As I arrived under the towers of Bishopsgate and took a familiar snap of Christ Church Spitalfields at the end of Brushfield Street, a wedding party was setting off indigo-coloured smoke bombs across the street. The church was solid, reliable, and sinister. Seemingly more robust than the surrounding steel towers and glass-fronted bank headquarters. My walks into London via ancient thoroughfares always manage to explain the topography - they are often the paths of least resistance. Straight and flat. Complicated only by human interventions.

You can find photographs from the walk here.