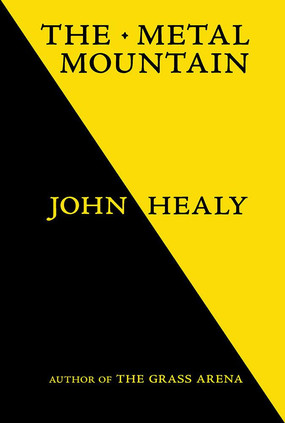 It's probably fair to say that I've read far more this year than for the last few. This is a strange situation for me: I've always had numerous books underway, piled haphazardly in different places and awaiting my attention. For the past several years though, life has been busy and complicated. Reading has required a special effort to be made. In some ways, I'm the poorer for it - not least in my own scribblings and projects. There's no doubt that the grist of other's unutterably superior writing is so often the jumping-off point for a ramble, both literal and metaphorical, of my own. I've often found too, that fiction is the first casualty of a reading dry-spell. While factual and historical works can be delved-into in the way of research, pulled from the shelf when required and returned for the next occasion, a novel asks for commitment. And so I embarked on The Metal Mountain in the most perfect of circumstances for committed reading: a long journey home on a quiet, evening departure from Paddington station. Leaving a gloomy, wet London which had offered a day of drab but endlessly fascinating canalside wanderings aligned almost eerily with the opening chapters of John Healy's second novel.

The Kilburn of John Healy's childhood was a few streets away from the railway which sidled west out of the capital, just an errant wrong-turn aside from the canal I'd been walking. I instantly recognised the landscape: sixty years is no time at all in the industrial hinterland of London where it remains possible to pass from the 21st century to the 19th in the turn of a corner. The immigrant Irish community which Healy describes in the opening chapters of this novel have done something similar: departing an Ireland trapped in the fall-out of 18th Century politics, they have landed in a London paralysed in a facsimile of the Victorian age. Two world wars and years of austerity have trapped the city and its people in an idealised fiction of the past: one where the Irish are as welcome as stray dogs, and prejudice is worn like a badge. As Healy's young Michael Docherty patrols the streets with his newly arrived Aunt Bridget, he is stung by the realisation that the world he's grown up in is hostile to the circumstance of his birth. The cards stacked against Healy's characters are a thread through The Metal Mountain and their largely fruitless attempts to change their fate drive the narrative.

The Metal Mountain, by John Healy

The early chapters set a scene but are far from mere exposition: the Docherty family passes through a range of indignities, from the outright prejudice of exclusion from the Coronation Day celebrations to the passive indifference of the powers-that-be to their status or contribution. Séan Docherty, the embittered father wraps his frustrations into dreams of his home country, haunted by the horrors wrought upon it - indeed upon his family - by English soldiers, while his wife Mary Jane suffers through the day-to-day with dignity and faith. The arrival of Bridget adds life and colour to the family for a while, her fresh anger at the discrimination she faces highlighting the gulf between the soft-focus nationalism of the father and the hardening realism of his son. Healy's writing of these characters is exemplary: the contradictions and complications of immigrant status are wound around them, frustrating and denying them progress or due process. Healy's men snarl and sputter with uncontained rage, while his women are distant, sombre and faithful. It's sometimes hard to remember that this is Healy's second novel, written in the last decade or so, and not an unearthed mid-century masterpiece.

The Metal Mountain appears midway through the book and provides a lightning rod for some of Healy's most vivid descriptive writing. A railway-wharf scrapyard, run by a strange old farrier who breaks down the hulking metal detritus of the industrial age for onward sale and re-use provides Michael Docherty with a job, and eventually with a means to defraud the system within which he has grown embittered. While he strives to conquer the mountain of distended, buckled metal, Bridget sets out on her own mission: seeking justice for immigrants - initially via the auspices of the Catholic Church, but increasingly through political activity. Her story is the most resonant and contemporary perhaps: she tries to engage with the leftwing intelligentsia and finds a sort of derisory, superior take on equality. She then finally attains an audience with a Home Office minister's factotum, and finds only cold, polite prejudice and indifference dressed up as a political necessity. Her struggle ends with her marked as an agitator and condemned to a mysterious fate which is not explored. Healy leaves Bridget's possible martyrdom exposed to question, open to the very kind of speculation which fuels the divisions of British society today. There is, intentional or not, powerful allegory here.

The closing chapters of The Metal Mountain are urgent, coarse and sometimes coruscate with an earthy violence. They move from the warm harbour of the struggling family to the strange, bitter and lonely world of the characters as they separate and attempt to make their way in the hostile foreign land. Michael, disfigured by a horrific injury wrought on him by the mountain, pursues an amoral path - and eventually meets his comeuppance at the foot of the mountain. Healy is at his best here, letting the animate and inanimate blur in dizzying, sometimes sickeningly descriptive prose. The mountain is the genius loci of the urban wastelands of London, a vengeful spirit of place that will bite the hands which feed it without compunction. The novel ends as it begins: the surviving characters dwelling in frustration and spent vigour, the official disdain for the plight of newcomers to Britain echoing down the decades to the 'hostile environment' and the rhetoric of the modern far-right. Nothing much changes, and Healy in his long and colourful life of contrasts and contradictions has seen it all repeat in cycles. That he is able to summon such fully-realised characters which ache with their will to attain the life they have left their homeland for, is the mark of a truly wonderful writer.

You can find The Metal Mountain at Amazon, or better yet at your local bookshop.