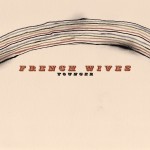 A little before I began writing this blog, and when I'd just begun to rediscover the excitement and confusion of the unsigned music scene, I stumbled across French Wives totally by accident. In a world where unsigned had previously meant wading through endless pub-rock demos and badly written press releases, this was simply stunning, and that song - "Halloween" as it happens - still stops me in my tracks when it pops up on random play. I remember naively bumbling around and finding the single on iTunes - and in the process assuming I was dealing with an established act which had passed me by, rather than the first single from a relatively new band. It's been a long road to a debut album for French Wives, but one that has produced a steady stream of closet pop classics and moments of understated brilliance, and "Younger" is the latest step towards that Electric Honey Records debut which is due later in the year.

What French Wives manage better almost than any band operating in this area just now, is the sense of event and spectacle. Building songs into layered, complex, life-affirming swells without turning them into those overblown 'anthems' destined for Masterchef vote-offs isn't easy. Here it's achieved by centring the track on one of those nagging, epic guitar lines which lifts your heart instantly and just keeps growing as the song develops. Coupled to the insistent winding violins and vocal harmonies which support Stuart Dougan's distinctive croon, "Younger" becomes a hymn to ageing and regret which belies the relative youth of the band. Things build up to the simple but stark declaration that "I wish I had found my marker/I wish I had started younger" before the track spirals off into a crescendo of defiance and determination. The album isn't far away now, and will represent just the marker French Wives are seeking - and it will represent the culmination of a whole lot of effort, frustration and persistence. It's no accident perhaps then, that these themes come to the fore here. I'm fairly certain that French Wives are going to be a far more widely known name by the next time I'm wittering about them here.

You can get your hands on "Younger" from Bandcamp as a free download. 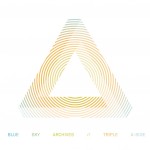 I've found it hard to pin down Blue Sky Archives - not in the musical sense, as I've been captivated since my first listen - but they always seem to play the day after I leave town or release records at times when I'm up to my ears in work stuff or neglecting this blog for other reasons. So, its a huge privilege to finally get to write about this quietly productive band who have now churned out three beautifully finished EPs of sharp-edged, bittersweet pop music over the last year or so. Blue Sky Archives have always benefited from having several vocalists in their ranks, but perhaps for the first time here Lauren Mayberry's beautifully sweet, folk-tinged but surprisingly robust voice leads all three tracks. However, there is something of a development here since last years "Plural EP" in the use of more varied instrumentation and harmonies which lend the whole record a depth and luxuriousness. Kicking off with solid beats and scratchy guitars, "Bitches" is a shimmering slice of dreamy jangle pop, with Mayberry coming across like a far less twee Harriet Wheeler at first listen. Meanwhile, the music fails entirely to conform to the shambling stereotype of indie-pop, with some incredibly precise guitar work which builds into a punchy ending.

"Cosplay The Hard Way" emerged as an early taster for this EP, and despite it's gentle and delicate opening passages the lyric contains more than a hint of menace and implications of troubled sexual politics which, taken alongside the innocence and sweetness of the music become genuinely uncomfortable. Mid way through the song takes a dramatic flip, with a serrated guitar line entering - before a beautifully constructed cascade of vocal harmonies and strings sees things through to the end. The ending is unresolved - and there is a sense that whatever dark happenings the song hints at are bound to be repeated. This is wonderfully crafted, detailed pop music used to explore the corners of your mind where perhaps you'd least expect to find it heading. In that sense, it's just about perfect. Finally "Back In A Liquid Minute" showcases some wonderfully slinky, undulating bass playing as an incongruously funky counterpoint to crunchy guitar riffs and soaring choruses. Once again the lyrics seem to tackle personal boundaries and themes of threat and submission when Lauren sings "my body is your battleground".

In the space of around ten minutes of music, Blue Sky Archives manage to cover an emotional and musical range which seems almost impossible. Crossing more genre-boundaries than it might at first appear, their tactic of post-rock colliding with folk-rock in three-minute pop songs sounds implausible and contrived on paper, but it works insanely well in practice. This is a concise, compelling bunch of songs which hint at future greatness for this hardworking bunch. I just hope I get to be in the same place as them soon.

The "Triple A-Side EP" is available as a digital download from Bandcamp, or here as a CD.