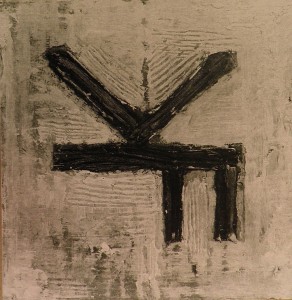 This is by my reckoning, the one hundredth post on Songs Heard on Fast Trains. I still sometimes wonder if I'm not completely barking up the wrong tree here, scribbling away about music I love, and somewhat randomly hitting and missing releases depending on how the blog fits in with real life. Still, it keeps me busy and it organises my thoughts - two incredibly important things just now, so it's likely you're stuck with me for a little longer. It also seems fitting that this landmark posting should go to The Douglas Firs - a band I've not written about before, but which has lingered in the background of my listening for sometime. Last year's "Happy As a Windless Flag" slipped by unremarked here, really only because of my own bad time-management - but had it made these pages i'd have written about dark, sometimes impenetrable and confusing music which is oddly, almost perversely addictive. This EP, while essentially a collection of field recordings and fragments recorded since the album, continues in that curiously compelling vein - and at the same time documents the metamorphosis of The Douglas Firs from one-man bedroom recording project to a full live band.

Available as a download, or a austerely packaged cassette or CD, this EP gives away few secrets from the outside. Even my normally astute mail thief neighbours failed to steal this one which perhaps hints at just how oblique and anonymous the release is. Beginning with "30.11.10", an echoing drone of background noises and feedback which surrounds a distant bass melody, it's clear that this isn't going to present lots of hit pop tunes. "What Remains" continues in a similar musical vein, but adds Neil Insh's plaintive, high vocals along with cascades of guitar and washes of percussion. I'm struck here, as on the debut album, that what sets The Douglas Firs apart from most other acts is that events in the background of songs are often far more important that the immediate foreground. Despite being quite noisy and fairly sonically challenging in places, this is never in your face - never overblown. The skill in building these cinematic scenes becomes increasingly apparent on "Ghost Wardrobe" which takes a simple bass guitar and violin coupling, and turns it into a sinister but beautiful sheen, which has an oddly perfect fit with the theme of spectral bedroom furnishings!

On "Something There" we're faced with a curious chorus of voices, sometimes sweetly harmonic and sometimes insistent and imploring - but always over a weird, industrial background of wind and traffic. It's unsettling and confusing - is this the sound of the Highlands where The Douglas Firs began their journey, or the urban edgelands of Edinburgh? In either case, there is a journey at the heart of this song - a strategy which always appeals to me. There are more conventional songs here too, and "Frameworks" is a example in its gentle acoustic interlude. Possibly the most upbeat composition here and driven by an undertow of bass guitar, Insh uses his high voice to struggle with structures and forms here - vocally and lyrically. Meanwhile "Church Hill" centres on a wavering, uncertain vocal and spartan piano notes which cluster around an echoing drumbeat. Like most of the vocal pieces here the mood is reflective and distant, with an obscure and pervasive sense of melancholy. Despite the simplicity of the instrumentation, it's a surprisingly warm and engaging piece. The droning opening of "The Dream, September" mocks the 'pipes and shortbread tin' stereotypes which scupper Scottish music all too often in the eyes of the world outside. This glitchy, atmospheric shimmer slips from channel to channel in the headphones, providing an interlude before we're transported once again via "South-Folk in Cold Country". This has more than a hint of the sounds of the early New Zealand DIY scene in its sparse instrumentation, military drums and stentorian vocals. There are familiar hints of impending discomfort with the troubled observation that "the indication that all is not fine". Taking advantage of the expanded line-up of the band, distant brass and piano accompaniment add depth and somehow this starts to pull together and make sense of the widely varied sounds which have preceded it.

The pieces which make up this release, whilst not designed to belong together in any sense, have conspired to become a whole which is sometimes shadowy and indistinct, but at others incredibly direct and accessible. The simple recording technology and experimental nature of "ep1" don't always make for easy or comfortable listening, but they document the processes of a band developing and changing, providing some beautiful sound pictures along the way. If the developments here are the future of The Douglas Firs it's going to be a very interesting one to watch unfolding. This is the soundtrack to a movie which will never be made...don't let it become a lost gem.

This release is available from 5th March as a simply packaged CD or Cassette, along with a digital download from Armellodie Records. Proceeds from this release contribute to the recording and release of the band's forthcoming second album. You can read more about The Douglas Firs here.