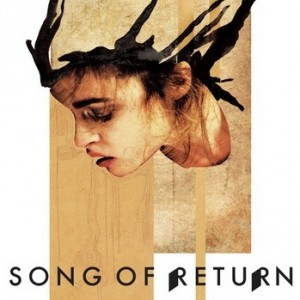 As is often the case with new music, my first listen to this long awaited album is on a train. This time though, despite the threat of summer arriving earlier in the week, I'm travelling under brooding, leaden skies. It's a bitter morning in more ways than one, and somehow once again the right music finds me just when I need it. In this case music that is capable of indulging my glowering bad temper, but also of lifting the spirits and inspiring action. Song Of Return are assembled from a fairly high quality kit of parts - based initially around the feted but now defunct electro outfit Union Of Knives, members of several other notable acts feature including perhaps surprisingly Louis Abbott of Admiral Fallow. This range of talent makes "Limits" a varied, ambitious and ultimately dazzling collection of music which explores both highs and lows

I'm struck initially by "Shackles" which I remember from a demo which has been knocking around on my iPod for a while. It occurred to me back then that it was almost perfect - and that any band that had recorded demos which sounded this complete was going to be pretty special. Sensibly, little has changed here - an aching, sweeping vocal is supported by guitar riffs which pile onto each other, ratcheting up the levels of noise further and further until things finally soar impossibly. It's an expansive, breathtaking piece of work, which showcases Song Of Return's ability to build music in a theatrical sense - providing a backdrop, setting a stage and then finally letting the action begin. This approach, whilst well-tested by a host of acts around currently, never gets tired in this case because Song Of Return do it incredibly well - without fuss, pomp or self-importance in any sense.

Next, there is a jagged electronic pulse at the core of "Concentric" - it's a stuttering, nagging song, with a wall of noise slipping in and out of focus which has a strangely orchestral quality. Joined by what sounds like a choir of children, the main vocal is edged into the background, leaving the wash of noise and disembodied voices to push the song to it's quiet, electronic ending. Biology was always my least favourite subject at school, and initially the title of "Story of a Cell" makes me think of interminable afternoons watching a Science teacher being ritually humiliated by a class pointing at pictures of the human reproductive system. However as "Concentric" quietly ebbs into the dirty, distorted bassline which slinks through this track, the cry "if I am singular how can I rebel?" strikes a chord. It's all working towards a chorus buried in duelling squealing guitars while the vocal insists 'you choose to let your ship go under now' as the song disintegrates, with practically only the drums remaining.

"One Million Hertz" opens via a gentler, understated entrance with a low murmured voice which intones an apocalyptic but weirdly optimistic lyric. The music is little more than a distant drone, except for a repeated piano refrain and sweeps of distant guitar. As the vocals soar, the composition starts to disassemble until there is little more than the voices remaining until "Anniversary" arrives via low, melancholy piano melodies, with a wash of guitar noise and distant distorted vocals. The urgency increases and echoing beats enter the growing maelstrom, but unusually it's the deep, darkening piano which heralds the explosion and not the all-too-easy big guitar ending this time. But when it lands, it's utterly massive as the bass performs somersaults beneath everything. Listening to this on headphones is a staggering, draining and emotional experience. But the album reaches its pinnacle for me on "Trajectory". Starting with a drone of organ and a desperate and insistent vocal, it builds through layers of throbbing bass and pulsing drums until it reaches a point where it's capable of spinning off with its own momentum. The first time I listened to it, again on a train but under sunnier skies this time, it all clicked strangely into place with its refrain of "I'm on a course/and the track is set/and it's leading me way out of my depth". I'm not sure how sensible it is making life-changing decisions based on the chance hearing of music at just the right moment - no doubt I'll write here and let you know how that pans out...

In a year of impressive and inventive records, "Limits" already stands out as something very special - cinematic and ambitious like few albums of this nature, sometimes punishingly loud, but also often dark and oblique - this album is open to endless re-interpretation. Capable of seismic noise alongside lighter, more delicate touches Song Of Return have stumbled across a formula which has eluded a whole slew of acts which have gone before. While the music of a lot of bands which attempt to produce wide-angle, epic and expansive rock gets misappropriated to clumsily soundtrack 'goal of the month', it's going to be tricky to do this with something as layered, intelligent and occasionally brutal as this.

Both physical CD copies and downloads of "Limits" are available at Bandcamp. You can also find it on iTunes.