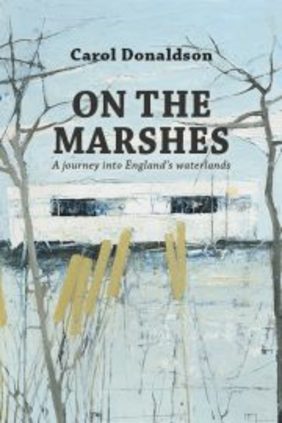 Carol Donaldson - On The Marshes

My relationship with Kent has been a troubled one over the years. I remember deciding on a railway excursion in the mid 1990s, somewhere on the interminably dull straight line between Tonbridge and Ashford on some dirty old slam-door stock, that I was convinced I didn't like Kent at all. However, over the years as I've explored more I've begun to truly appreciate the diversity of Kent. The sheer size of the county, taking in the broad sweep of land from the English Channel to the Thames Estuary, means that my early churlish observations were of course utterly invalid when applied more widely. In particular, the stretch of coast from the Medway to the North Sea has become something of a favourite spot over the years. Times change, people change - and contrary to our hopes and wishes, places often change too. That is, in a sense, the abiding truth captured in Carol Donaldson's 'On The Marshes'.

At face value, Donaldson's book uses a long, fractured walk along the sometimes impressively bleak marshes of North Kent as an opportunity to unravel and regroup after a serious of challenging life events. Donaldson's early career, living in a caravan and cataloguing the bird population of the marshes equips her beautifully to describe the scenery and its inhabitants. Her most powerful prose is often deployed in describing the expanses of absence which are so impressive in person but so hard to conjure in words. Her love for, and connection with these places is evident in every well-chosen word. This solvitur ambulando trope is of course not entirely new, but it has so often been the preserve of men - and there are points where Donaldson is curling up in her makeshift camp on an island or sleeping in an unlocked country church where the walk - and indeed the narrative - touches on vulnerability and fear. Happily, the greatest threat to Donaldson on her walk is the daddy long-legs, her pathological fear of which rather calls into question the wisdom of devoting her early career to working for the RSPB on the marshes.

Carol Donaldson - On The Marshes

As the walk develops, more of the tale unwinds - a relationship parts ways achingly slowly: he is pulled towards the everyday, middle-class world of a career, a house, boxed-sets and takeaways while she feels rooted in the caravan on the marshes. He strays, the Thames a literal and figurative divide, while she struggles to keep her home - finally losing to the machinery of the planning process. Cut loose from people and place Donaldson retraces her steps through the marshes - and this journey becomes as much about the people who have opted out of the norm and into an unorthodox life along the muddy creeks as it is about her own experiences. Along the way, what could be an excruciating tale of self-discovery or a hymn to alternative lifestyles actually begins to grapple with a dichotomy echoed in the management of the marshes: do we want to preserve things forever as they are, unknown and untroubled, or do we want to engage with the world?

At times, there is an oversimplification in the thinking - that those who live in houseboats or tiny plotland cottages are the colourful truth while the rest of the world is a grey and unenlightened fiction - but this is generally balanced by Donaldson's self-searching and often self-deprecating rumination after meeting the cast of characters. She shows utter respect for them, and warmth and appreciation for their lifestyles and choices - but ultimately can't commit to their complete fracture from the wider world. For most of us, I suspect that this would feel the same way - and while that boat or cottage might seem utterly compelling at times of turmoil or strife, it doesn't salve the underlying issues we face. As Donaldson settles on this conclusion herself, she turns her thinking to the land which supports these unofficial communities and the politics of its management. I suspect she and I wouldn't entirely agree on this either - but her case is well-made and she writes from the rare perspective among preservationists of someone who has lived and worked on the land which she writes about.

'On The Marshes' is a strange book which sounds simple on its surface, but surprisingly challenged my thinking as I reflected on reading it. At times I was convinced I didn't like it and disagreed entirely with Donaldson's worldview and political standpoints, but by the close I was rooting for her to find her path and to write more about the landscape she knows so well. What was entirely refreshing in terms of topographical writing, was to read from the female viewpoint - to focus for a refreshing change on acceptance and belonging rather than alienation.