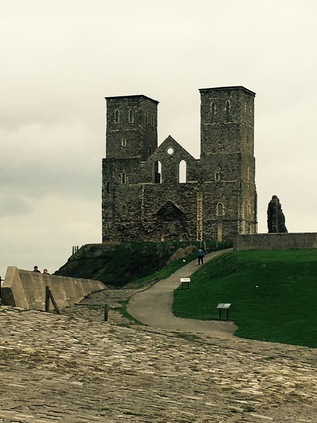 It felt good to be on the move again. Despite my committed trainspotter status, I've begun to relax into our road trips and to appreciate the opportunity to see familiar places from a new angle. This time was a little special, and I was childishly excited to be setting off having spent a night in the curious hotel I'd walked by just last month. Our night on the fringe of Essex was surprisingly quiet and relaxing - waking to a misty view over Epping Forest and taking an early train journey into the yawning and stretching city, the fog slowly lifting to reveal a weak, wintery sunshine. We'd set off early and grabbed a coffee in the rather quaint surroundings of Buckhurst Hill - a little village centre in the midst of the suburbs. People came and went, their Sunday morning ritual observed. We lingered before setting off along the High Road and intersecting with another of my recent walking routes. It felt strange to be driving the route I'd walked, joining the North Circular at Waterworks Corner near the spot where my route had come to a slithering, muddy halt just short weeks ago. On a Sunday morning the A406 was still a river of traffic, but it flowed steadily and easily. I'd crossed and recrossed the route so often in this quadrant that unlikely landmarks suggested themselves: footbridges, sliproads and underpasses that had figured in my wanderings were oddly familiar - but striking seen from another angle. The road curved south, dropping into the Roding Valley and stalking the line of electricity pylons which had shadowed my walk through Ilford into an unexpected monsoon. The flyover buckled over the road into town, striding ahead on stilts to meet the A13 at Barking Creek while Tate and Lyle's works at Silvertown glinted in a patch of distant sunlight. As we cruised down the ramp onto this road of which I'd made a particular study and had walked beside for miles, the dust and accumulated detritus whipped against the railings: "there's so much trash!". The A13 was a rollercoaster to the sea - bridges leaping and twisting between the edges of industry and the broad marshes. Over the Roding, over the strangely makeshift construction at Lodge Avenue, turning south and east to amble over Rainham Marsh. Still so much drifting plastic rubbish, so much dust and burned earth. The aroma of the waste reclamation site hung heavy over the brooding marshland. 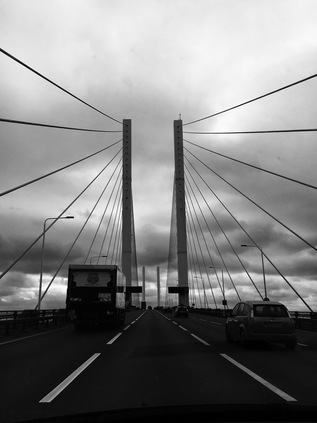 From some miles away we'd seen the Queen Elizabeth II Bridge arcing over the estuary, with speck-like vehicles hurrying over it's bowstrung deck. As we closed in, sliding effortlessly over the marshes which I'd walked with sore feet counting each step, the bridge felt unreal and fragile. Joining the lines of traffic climbing to its apex, all I could see ahead were the towers set against the pale estuarine skies. Beside us, the brown churn of the Thames was still and waveless. Lights winked from the tops of towering cranes at London Gateway, and to the west there was a smudge of silver-grey where the towers of Docklands stood. The nose of the car was down now, pointing at the green earth of Kent. We turned east again, the river visible here and there as Dartford slipped into Gravesend, before we disappeared into a chalk gorge with the High Speed railway line beside us. Suddenly we burst into an open vista of rolling, green woodland. The road marched ahead on a broad viaduct, with the sprawling Medway valley beneath us. There was surprisingly little trash to be found lining this route. South of the river is a different world, even out here it seems. 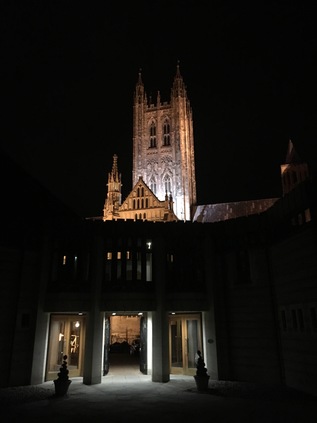 Canterbury Cathedral at night, from the Lodge

At Medway Services, a relic from the early 1960s which bridges the road offering a view back west as traffic crests the hill and zooms underneath M&S and Costa, we paused for coffee. We were nearing our destination for the remainder of our weekend, and needed to review the complex instructions for accessing the Canterbury Cathedral Lodge. The experience was pitched somewhere between a red carpet celebrity arrival and an East Berlin checkpoint: after navigating the ring road around the city walls, we entered an otherwise restricted road and turned a sharp right to a gated entrance. Our name was enough to lift the barrier. Permitted to enter only long enough to deposit our bags and collect a parking permit, we were soon to learn that rules and regulations were the engine of this place. Waking on our first morning I took my customary stroll. The sky was a dull pink-grey, the sun just beginning it's ascent. I gazed up at the butter-yellow stone of the Cathedral as I walked towards the gate, so impressively close to our lodgings. I was brought up sharply by a voice asking me to stop. The uniformed Catherdral Constables protected the precinct outside public hours with a grim determination: "How did you get in here?". I showed the pass card the hotel had issued - but that wasn't enough. ID was required - but I had none. Not being a driver, and not customarily carrying a passport in my home country, I wasn't able to support my pass with the correct credentials. "What are we going to do now?" the Constable asked sarcastically. My suggestion didn't help at all - "Find a real policeman?". Eventually they decided that a fistful of bank cards and suchlike bearing the same name would do, and let me out into the streets of the city. It felt oddly liberating to be among the tumbling old buildings and hidden alleyways of this ancient place. I headed for the River Stour and sat for a while in the quiet of Abbot's Mill Garden, the water cascading through a tangle of channels which once fed the wheels.

Despite the regime at the hotel which felt equally oppressive and challenging inside the building as out, we managed to relax and enjoy the city. Because of the atmosphere of a religious retreat inside, escaping the gates felt like an exhalation - and elsewhere in Canterbury we found friendly service, excellent food and very little of the bleak Protestant disapproval which the Lodge seemed to be founded on. Oddly, inside the Cathedral building too, the atmosphere was immediately different - charged with significance and history, the sheer burden of time crushed the fusty rules and deferred all to a higher authority. The vast nave stretched into the distance, rising to form Trinity Chapel where St. Thomas Becket's bones lay until disturbed by Henry VIII. He didn't prevail entirely here - this by far the most colourful, most Catholic of Anglican churches - right here at the heart of the diluted, English faith. Much of British history wound back to this place but it was far from an inert shrine for display purposes only: as we shuffled along the wall of remarkable monuments a funeral was beginning in the Quire. All too soon it was time to begin the trip home, but there was a further stop to make first. After a winding journey along country roads, tailgated by white vans and nearly side-swiped by throbbing BMWs, we turned a corner to witness the stark towers of the ruins at Reculver. I'd seen this uncanny, sublime view from the train window many times but close at hand, on it's clifftop roost, the scale of the proud, surviving towers was impressive. We walked the path to the towers, the flat field beside them covering the remains of a roman fortress. This spot had defended the coast for centuries - and the towers had served as a waymark for boats using the long disappeared Wantsum Channel and a navigation aid for the treacherous Thames estuary. Looking out across the water I could see distant ranks of wind turbines, and between them the eerily animate shadows of the Maunsell Forts at Shivering Sands. Beyond lay distant Essex, where this journey had started - and where I had further ground to cover, more business with this estuary. Lately, I'd been reading and thinking much about Charles Olson, and his words suddenly fell perfectly into step with the view across the water:

It is undone business I speak of, this morning, with the sea stretching out from my feet

Charles Olson, Maximus To Himself, 1960

We headed back to the car to make the long drive west. Once again, Kent had surprised me with it's ability to ensnare me in it's history and to make me want to return. The haunting views at Reculver needed to be considered further, their stories unravelled in detail. We followed the taillights back towards London, and home.

There is a small gallery of pictures from the trip here.