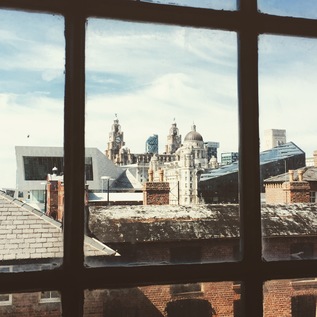 It felt like a long time since I'd faced the challenge of getting a seat on a CrossCountry Voyager. Oddly, I was feeling really tense about the process. I'd taken all the usual precautions - booked the seats I wanted, located the point the train would stop at, everything short of booking a ridiculously early train which would be empty as per my usual tactics but somewhat unpopular in other quarters! As the unit rolled in, I noted someone in our seats and felt my anger rise. Boy did I need this break. It had been a long, complicated summer so far at work, and I'd been struggling to maintain a balanced view as things had whirled around me. In the event, whether it was my respectful pointing out that the seats were reserved or the fact that my knitted brows betrayed my anger, they moved. A few minutes later we were scudding north with the aircon working hard and I was feeling very happy to be back on the rails. It's moments like this that I realise that travel is essential to keeping me on track - in every sense. This trip, hastily planned but much looked-forward to, would take in Liverpool and Manchester - somewhere we'd liked on a previous visit along with a brief glimpse of a new city. For me it was a chance to revisit old haunts, ring the changes on the rails and to relax.

The first remarkable change I had to deal with was Birmingham New Street. A quick scan of posts on this site over the years will see that I visited often. Often enough to confidently plan ludicrously swift changes of train with time to collect coffee and breakfast on route. On trips where I needed to break a homeward journey I'd schedule in a break to drink coffee and watch the world go by while I waited for the always mysteriously quiet 18:42 home. I knew New Street well - and while it was drab, over-complicated and unfriendly in so many ways, I rather liked it. The redevelopment of the station and the retail complex above it began just as I drifted away from the rails and was completed last year, and I'd heard a lot about how different it was now. On arrival it didn't look too different at all - the stairs and escalators up to the concourse had received some attention and there were now helpful lifts at both ends of the platform - but otherwise it was still the gloomy dungeon it had always been. Then we stepped out of the lift into another world! I calculated, after getting my bearings, that we were on the site of the concourse which bridged the platforms in the old station. Passing through what would have been the site of the ticket gates we wandered into a lofty, bright atrium surrounded by retail units and restaurants. Sunlight streamed in from above, drawing the eye up two floors to the flagship John Lewis store. At ground level, a huge range of food options circled the atrium, with more stairs, lifts and escalators to access the other end of the platforms ahead of us. Everything was bright, clean and efficient. I was bewildered. Waiting in perhaps the rudest Starbucks I've ever visited while a quick John Lewis visit took place, I reflected on the change. I needed to come back and explore - to just walk the place, understand it. Replace old routes with new. Right now it was novel and strange, but unsettling. I couldn't navigate with the confidence which I'd always had here. 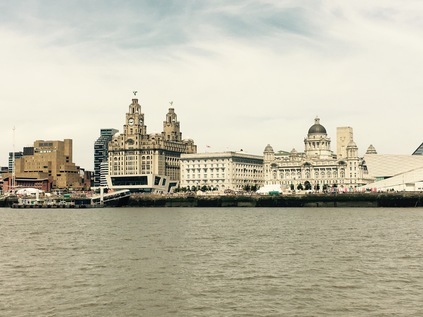 Back down on the much more familiar territory of platform 4C we boarded the Class 350 unit bound for Liverpool and enjoyed an M&S picnic as we set off for Wolverhampton. The train filled and emptied as we stopped at the smaller stations on the route, before navigating the recently opened junctions at Norton Bridge. The course of the new railway passed gracefully overhead, slightly disorienting me. But soon the terrain was more familiar - we were passing Basford Hall Yard, then calling at Crewe, and finally heading west at Weaver Junction and into the stretch of urban and industrial sprawl which runs along the north bank of the Mersey as it broadens into its estuary. Making good time, the scenery was a delight. Seeing the changing shape of Britain was such an everyday experience once - but now it genuinely feels like a privilege again. To do this on a warm summer afternoon in good company was even better. For the first time in a while I was feeling relaxed about this trip and it's potential for complications.

Arrival in Liverpool was, as ever, an impressive experience. Plunging into the deeply carved cuttings at Edge Hill we snaked into the lofty terminus at Lime Street and wandered onto the concourse. First stop was the taxi rank, then a swift spin around the city to our hotel which was near the waterfront and Moorfields station. The gentle slope down to the Mersey made for a fantastic view, with the ever-watchful Liver Birds visible over the rooftops. We spent a little time in the evening sitting outside the hotel, watching the sun slip low over the Wirral as the last few ferries plied their trade on the broad river. It was good to be back here, and good to be staying for a few days. On our first morning we took a tour bus to orient ourselves - my early walk across the city to find coffee had taken a similar route up to St. George's Hall and the station, but then the bus swung east to make the link between the two superb cathedrals - the beautiful modernist pinnacle of the Metropolitan Cathedral designed by Frederick Gibberd, and then Gilbert Scott's massive red stone hulk on St. James' Mount. We made a mental note to return here, but the lure of the river was strong and when the heat became almost too much we decided to take the ferry on its lazy looping route - north to the docks, west to Seacombe, south to Birkenhead and then back to the Port of Liverpool's angular but attractive new terminus. The deceptive breeze lured us into feeling pleasantly cool, and neither of us noticed the pink tint to our faces as we watched the water slip by from the deck. 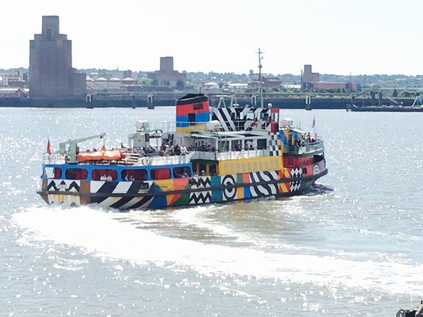 We combined the trip out to the cathedrals with a visit to Moose and Moonshine - a restaurant based on Moose the local brunch and coffee shop in town, which was unfortunately closed for refurbishment for much of our trip. It was probably too hot for breakfast foods - but as I contemplated a morning in the presence of two holy places, I needed earthly sustenance. Breakfast shouldn't be hard to come by, but in the cities of England it somehow seems to be now. It's a meal best found on the classless edgelands and suburbs - in grease-caffs and at roadside vans - but not in the self-conscious city. This then, was a real treat. Good, hearty, beautifully cooked breakfast! Afterwards, feeling sluggish but happy, we braved the roasting heat of the middle of the hottest day of the year to ascend the steps to the Catholic Metropolitan Cathedral. The awe-inspiring effect of the disconnected belltower and the circle of irregular blocks which seem to form a whole circle from a distance was remarkable. The lighting inside was equally impressive, with natural sunlight through subtle blocks of stained glass lighting the building like tubes of bright neon. We sat for a while, then circled the building. It was cool and calm inside, far preferable to the Graduation Day tumult of people sweating outside in gowns and ermine. Eventually we decided to leave and headed for the Philharmonic - a Liverpool institution - for a pint before heading back to the air-conditioned hotel room. The Anglicans could wait until next visit - a whole new cathedral for us to explore, perhaps after another breakfast?

Our plan was to leave Liverpool and spend a night in Manchester - it would be a first visit for one of us, a chance to orient to the city, and something that's worked well before. After a brief stopover in York for instance we knew we needed to revisit soon. The train was rather warm but pleasantly quiet and as we trundled over the canals and viaducts of Manchester, we were looking forward to getting to the hotel. I'd chosen one I'd frequented a number of previous times, which I hoped would provide for some good views. However, on arrival we realised that the promised refurbished rooms didn't have air-conditioning. The room had been baking in 32Âº heat all day, and even the provided fans weren't cooling us down. It was incredibly hot outside too, but thankfully we managed to get a seat outside a fine restaurant for dinner. Then it was back to the greenhouse of a hotel room for an uncomfortable night. When we checked out I invoked the 'good night guarantee' for the first time ever. The receptionist didn't seem surprised. I later discovered that some floors of the hotel do have air-conditioning as I'd thought - but the upper floors do not due to a dispute with the landlord of the building. I'm sure there were several refunds made that morning, indeed the gent who left before us seemed to have the same issues. 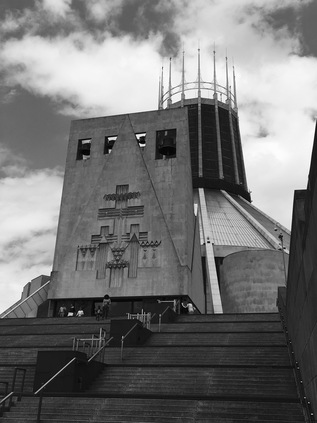 Our train home was a treat for me - a chance to travel again on the direct service from Manchester to Bristol which had once been a staple of my repertoire. I'd noticed some perturbation on the lines south to Birmingham all morning and I felt the return of the queasy uncertainty I'd had at the outset. Crosscountry haven't ever been the most reliable operator for me, but fending for two of us now felt different. As it happened, our train ran perfectly, and we soon slipped into our chosen seats and relaxed our way south towards home. Taking the new link at Norton Bridge confused me at first - the layout a mystery despite having read endless articles about it prior to its building. Not changing at New Street meant missing a chance to explore the station again - but given the heat and what seemed to be an even larger load of luggage, I wasn't sorry to be able to sit comfortably in our seats while the hordes battled over reservations in the time-honoured fashion. A departure via Proof House Junction and the Camp Hill line was a bonus reminder of the reasons I used to pick these trains home on a fairly regular basis - and I was a little nostalgic for my old evening ritual. A vacation on the rails had been a welcome change to our recent road trips - and Liverpool was just about the perfect city to visit by train. Already our next visit was shaping up - for starters we'd done virtually none of the Beatles-related sightseeing. In hindsight, the heat had probably meant we'd done far less of everything - except perhaps relaxing. For me, it was good to be back on the rails too, and exploring some of the changes to the network I once knew perhaps better than the back of my own hand. I've been away for far too long.

You can see more pictures from the trip here.