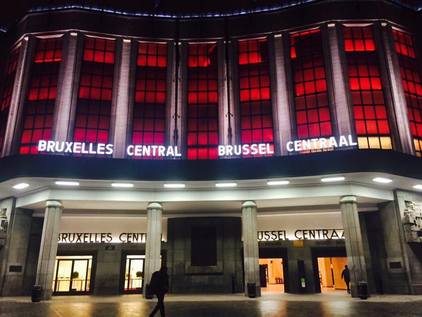 Sticking with the Union

I try desperately hard not to let stereotypes govern my travels. It would be too easy to let an accent, a nationality or an attitude define the subtle shifts across locales as I walk around London for instance. It would be even easier to do the same on mainland Europe. I'm finally back here in Brussels - fourteen years after my last visit when I strolled without care around a city which I barely connected with. This time things feel very different indeed. Firstly, we are on the brink of a potentially momentous referendum which would see the link between the UK and this city changed irretrievably. Right now Brussels feels like a world city - people speak to me in perfect, polite English, they bustle around the city with just a hint of the gallic laissez faire. This truly is a crossroads - where latin and germanic Europe meets, and sometimes as history has shown - clashes with terrifying consequences. Brussels is a strange and potent place which is not nearly as inconsequential as it felt on my first visit.

Secondly, Brussels is now a fortress. The terrible attacks on democracy and western reason which brought terrorists to the rather beautiful heart of this curious place still echo in the streets. Soldiers patrol railway stations with their perky Jean-Claude Van Damme style berets and automatic weapons. The police skitter about from place to place, checking an impossibly endless number of key spots for signs of concern. This is either the safest or the most dangerous place in the world to be just now. Mostly though, seen through the eyes of someone who hasn't ever set foot in mainland Europe, Brussels is an exciting collision of the familiar and the alien. The impact of the gilded halls in Grand Place, the vast verdigreed dome of the Palace of Justice or the warm modernity of Gare Centrale are so very un-British. So different to the anglo-centric world which we left only two hours ago after stepping onto a train at St.Pancras. 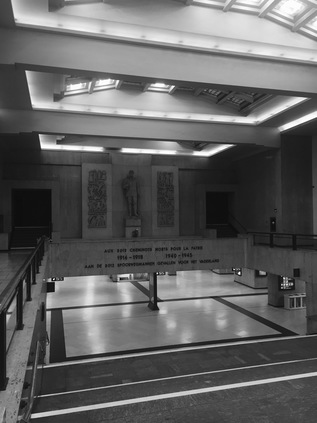 I quickly found my morning routine here - a constitutional around the cobbled streets and alleys which surround our hotel, then into the station for coffee and a chance to watch people. The smell of warm waffles curled up from the concessions on the station concourse, and the friendly baristas learned my order. I felt welcome - at home even. I was beginning to fall for this complex, strange but oddly welcoming city. But it wasn't to be without its challenge. After a normal morning wandering and enjoying watching busy crowds commuting, we strolled a little before heading onto the Metro to get to Heysel. There appeared to be disruption - routes missing from screens, and the information system didn't seem to be coping well with translating it. We made our way to Brussels Midi and found the system in disarray. A strike had been called by MIVB workers this very morning, and very little was working. We decided to head back for the centre. As we entered the platform, crowds of demonstrating strikers appeared - with the Metro out of action they took full advantage of SNCB's services - travelling in packs, smoking and holding doors open to delay trains for their colleagues. There were three distinct teams: the Socialists, wearing red of course and by far the most tetchy of the bunch, the Christians who wore green and seemed to make a beeline for the bars and sex clubs in the seedier areas around Midi. Finally, the Liberals - blue jacketed and far fewer in number - we wondered in fact if it wasn't the same little pack of four or five we saw repeatedly touring the city.

Back at Central Station, we found more chaos. The unions had closed down most of the exits, with only the tunnel leading to Cantersteen open. We joined a long line of angry, bewildered commuters, pushing against a tide of union folks who didn't mind who they nudged aside in their rush into the station. Then the firecrackers began and people began to panic. It struck me as utterly insensitive that Metro workers, still reeling from the terrible attacks on the city and their stations just months ago, would think it fitting to contain folk inside a small area and then to set off firecrackers. I deployed my elbows and forced my way up the staircase and into the street. For the first time in a long time, I felt a surge of violent temper of my own. As we forced our way past the protests, the only reasonable route back to our hotel, a red-coated socialist threw a firecracker under a policecar. The dull thud sent us reeling. He laughed. I pursued him, fists clench and insults flying - but he had earplugs to defend his ears from his own explosions. We weren't sorry to get back to the quiet of the hotel. I felt my admiration for the city peeling away, the lustre tarnished by the tinge of the old European horror of strikes and obstructions. It was the strangest but perhaps most memorable wedding anniversary we've had yet. 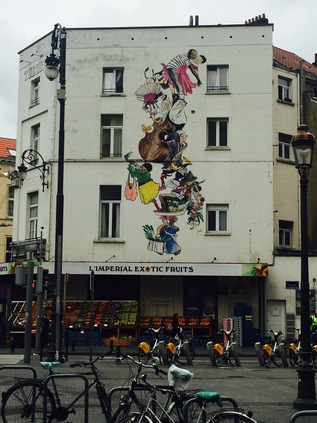 In a little under a month, the UK will vote on its future in the political and economic union which centres on this city - this most functional and straightforward, but sometimes ridiculously quirky place. A city where an utterly rational European government co-exists with some of the most agitated workers, where the beer is wonderful and the food utterly confusing. As we set off in the early Brussels evening, the light glinting from the passing commuter trains starting to make their way through the bruised but not broken city, it's hard not to feel just as oddly optimistic for the place as I did when we first arrived. Whatever happens next month - and I fear it rests on a knife edge just now - I want us to remain connected to the continent, with Brussels as the point where we plug into it's confusing, bureaucratic but utterly logical heart.