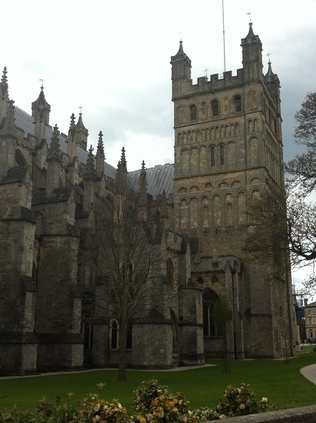 As we set out this morning I tried to mentally calculate when I'd last been to Exeter. That's to say - actually wandered outside St. David's Station and into the city centre. Certainly there had been plenty of passing visits - not least during the summer of 2004 when almost every weekend saw me flying up and down on the locomotive hauled special trains which Virgin put on. There had also been a few FGW Customer Panel meetings which had necessitated a train up the bank to Central Station and a dash across the street to the hotel. But, I was a little shocked when I realised that the last proper visit - and the one on which I base most of my memories of the city - was back in 2002!

This was a bit of a 'getting back on the horse' trip. Whilst the Scottish excursion had been fun, it had been a little dogged by illness and discomfort - and it felt important to get out and travel again. I was a little concerned about getting wedged onto a steaming Voyager full of angry people at Taunton, which is often the case later in the day - but in fact, after a quick run down on a local unit we were lucky enough to have one of CrossCountry's HST sets draw in. We found a spacious seat in a pleasantly cool carriage and watched the countryside slipping by. Springtime had finally descended on Somerset and Devon, and there were fields of lambs skipping around and plenty of greenery. After what seemed to be a long, tough winter here it was a relief to be out and about in relative warmth too. As we curved along the River Exe into our destination, I calculated the wait for a local unit up the hill into Central Station. It was only a few minutes, so we made the dash and after a screeching ascent of the bank, emerged into the City. It was shaping up to be a warm, dry afternoon as we picked our way through the crowds in the shopping area. Everyone seemed to be happy to be out in the sunshine, and the light stone buildings took on a warm glow. Our route zig-zagged around the streets, letting unusual stores or historical spots divert us. We'd considered a visit to a food festival in Northernhay Gardens but the queues were long and there was much to see. We settled for a wander around the Castle walls later instead.

Exeter Cathedral Towers over the green

Ducking down a little alleyway, we approached the Cathedral Close from the same angle as on my last visit. I knew this would slowly reveal the squat but solidly impressive building to its best advantage. It also showed the green sweep of the close with its range of historical buildings - a rank of ecclesiastical dwellings along one side, and fine victorian hotels and stores along the other. We ate outdoors, enjoying the sunshine and both people- and seagull-watching. As we explored the grounds further, the bells rang out for a wedding party - an elaborate, military affair in fact. Though we were struck how many of the party appeared to be dressed for the nightclub. One of the odd clashes here in Exeter seemed to be the grand, old and traditional and the oddly irreverent and new. A perfect example was tucked oddly into the recent Southernhay shopping redevelopment - St. Catherine's Chapel... A ruin, but an accessible and curiously peaceful spot, artifacts pressed between glass panels to capture it's history.

Nowhere typified the conundrum which is Exeter more than the spot we visited for a comfort break on the way out of town. A lounge turned sports bar, full of bawling children and negligent parents. At the rear, the entrance to a linked nightclub was roped off, the place filthy and dangerous. Cheap supermarket pop passed off as Coca Cola with a leering dare to challenge. We escaped as fast as we could and decided to walk back to St. Davids. Out into the curious old suburbs, over the grand Iron Bridge with it's views along the Longbrook Valley, then over the hill and down to more familiar territory as we approached the station. The square outside felt dilapidated and run down, the fine Great Western Inn still functioning, but in a rather less salubrious spot than before. If this had been our entrance to the city earlier, we may not have been so immediately charmed.

Reflecting on the trip on the way home - luckily enough on another CrossCountry HST - the strange mixture of old and new, retail and romance, and classy and downbeat which Exeter had presented seemed to typify many English cities. But the fine old buidlings and the relaxed, open feel of the place won the day. I don't want to leave it another ten years before I return.