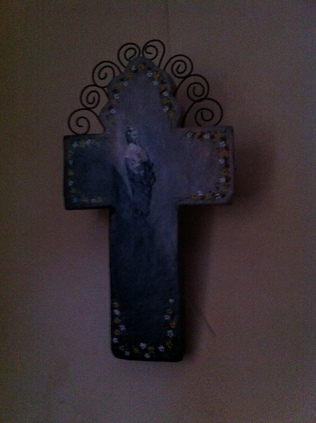 London Reappraised: There Is No Ending...

I've written little in recent months, but one recurring theme has been the experience of seeing places through new eyes. It's become a defining characteristic of the second half of the year, and it's perhaps no longer surprising to me to find myself challenged or intrigued by places I thought I knew. But the last week or so has been a little different - experiencing London, and specifically some segments of it I really don't know well at all, completely afresh. Exploring in tandem with someone who has never experienced the maelstrom of the city before, and who has probably been exposed to - and equally cynically rejected - most of the storybook pre-conceptions that I arrived with all those years back. This was a strangely fitting way to end the year.

The first new horizon broached was Camberwell. Until now for me, a conspicuous gap in the atlas. It has no railway station anymore - despite once being a desirable village suburb on the southern fringe of the city. In the intense, hot whirl of the summer the BBC ran an episode of "The Secret History of Our Streets" which covered the rise and fall of the area, and the durability of some pockets of leafy perfection. At the time this seemed like an interesting but anodyne programme - why did I care about this southern suburb which wasn't even worth a stop on the train? But arriving at the junction of Camberwell Church Street and Denmark Hill, we found the intensely busy hub which is repeated all over London. The locus of thousands of lives - which really is their London, and bears little relation to the gilded gates and ancient towers north of the river. Buses edged around the traffic, the Sophocles Bakery leaked enticing fumes, the pubs belched merry punters onto the after-work streetcorners. In the midst of this, the Church Street Hotel. A strangely latin influenced hipster boutique. A strong vein of Catholic iconography, lots of bold colour and crazy tiling. A beautifully detained interior behind a suitably anonymous, toned-down grey frontage. This was our home for a couple of nights - and a base to make some early forays into the city. First impressions are of course important - but where places are concerned they are malleable. Few cities more so than London, which throws surprises in at each turn of a corner. Starting as we meant to continue, the first night was a whirl of activity. A bus to Waterloo, and dinner under a railway arch. A walk along the river, Parliament lit yellow and looking deceptively benign across the water. Then another bus along The Strand and through the City. St. Pauls gleaming above the Thames, the Bank, the towers of Bishopsgate. Then south over London Bridge and through The Borough to return to Camberwell. It was dizzying - perhaps over-ambitious for a first trip into London. But it was an arc through the layers of history which is something I've always tried to convey in words and likely failed. Tired and bewildered, Camberwell felt strangely homely on our return. The little knot of streets still busy with traffic and pedestrians, little open now except the supermarkets and convenience stores. We stop into a pub, where there is surprisingly good music being played and a pleasant babble of conversation. Despite the incredibly cosmopolitan nature of the district, the clientele is surprisingly uniform.

Catholic chic at the Church St.

Regular readers will know that the West End is a closed book to me, as is much of Westminster and the more traditionally tourist side of London. This isn't wilful obscurantism - I'm really not fond of crowds, and my first visit to London during a cold December many years ago included being swept along Oxford Street in horribly dense eddys of humanity. I've avoided the place since - I've rarely the urge or the means to shop, and there has always been something more interesting elsewhere. Aside from the area immediately surrounding Victoria station, the environs of Buckingham Palace are equally obscure to me - but it was here that we ended up. After a superb and lazily drawn-out breakfast at a tiny cafe near Victoria, we skirted the back wall of the Palace - the drab, spike-topped cordon which would appear entirely un-royal if not for the frequent plaques warning of its special legal status, posted in suitably discreet white on grey and in a less-than-officious font of course. This approach has the advantage of concealing the grandeur until the very last second, the great facade suddenly appearing to our left, St. James' Park and the public space around the Victoria Memorial opening before us. As ever, a crowd of tourists milled and photographed. We did the same, and I confess I enjoyed it. It might have been the company of course - and certainly the novelty - but seeing this at the end of a year when royalty has been ever-present was odd and surprising. It hasn't felt particularly real to most of us I'm sure, and the dreadful TV coverage of the Jubilee did nothing but distance the Royals from the viewing population. But here, in the middle of the whirl of the city is the iconic balcony - smaller and lower, strangely close to the people milling about. Guards march back and forth, cameras flicker for the shot. We walk along Constitution Hill - our original plans changed by jetlag and time constraints. Another bus ride later I'm in more familiar territory around Marylebone, a stroll up Baker Street marvelling at the line for the Sherlock Holmes museum even at this late stage of the tourist day. Sick, dizzy and tired - it was time to head home. 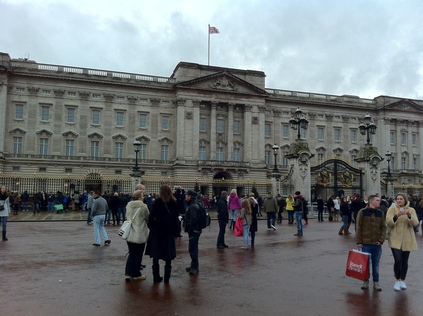 At the gates of Buckingham Palace

But this wasn't the end of the London experience... Travelling on the last day of the year, we returned to more familiar ground for me, descending on Bishopsgate in the early evening. If the first part of the visit had been a confusing, sometimes disconcerting whirl - I wanted this at least to reflect a little of the London which I experienced. A city where one can step back from the tumult and see the accretions of time. We wasted little time into getting out into the evening - the city was shifting into party mode, the stores closing early and the crowds beginning to appear on the street. New year in London is an event, a public spectacle of fireworks and drunkenness. We skirted this and turned east, heading for The English Restaurant in Brushfield Street. Oysters and robust, excellent fare in the dark, wood-panelled dining room was a fitting way to spend the evening. It was possibly the best meal I've ever eaten, and it was distinctly of the city. The dark but warm interior of the building discharging atmosphere, the solid Englishness of the dishes completely in context with the surroundings. In true London style, we were served by a range of non-natives - Australian barmen (naturally) and a genuinely pleasant northern waitress who was enthusiastic about the food. We wandered in the chaos of the late evening happily fed and watered. This was a new experience for me - this part of the city is about desperate, high-speed runs, about snatched moments in busy days. So to be here with accommodation on the brink of the east was a luxury. We plunged into Spitalfields, navigating around the glowering hulk of Christ Church and sliding into the darkness of Fournier Street. This part of the city seems so familiar, but it's new to see it in the dark of a winter evening. The buildings glow with an inner warmth. Generations of ghosts cluster at the windows, clamouring for a look at the gaudy, neon swirl of Brick Lane. We emerge into the maelstrom. The curry houses are doing fine trade - but still the patrons send their staff out to press-gang more trade from the streets. The New Year has been adopted by the locals here, and Indian girls totter by on impossible heels while another of their number tries to loudly encourage a drunken colleague back onto her feet. She hasn't quite made it to the new year - slumped against an old brick wall which has propped up the dissipated for many, many years. We turn a corner and regard a significant spot - the sundial on the Jamme Masjid. It's odd to be here now, tonight - completing a circuit begun years ago when I first took the picture of this curious device and it's sonorous motto. Then continued when I sent the picture flying across the world last summer - a significance which only now begins to reveal its magnitude. We stand a while, and yes - it's an emotional moment - one which closes the dizzy, unbelievable swirl of 2012 in an appropriately reflective tone.

We want to get back in time for the bells and fireworks, and take a crazy dash through the detritus of Petticoat Lane market and the commercial edgelands which divide the City from the East End here. It's been a whirl of new experiences these past few days - endless dashes from train to bus and back, time spent renewing my acquaintance with the city through entirely new eyes. I appreciate again what an enormous, unmanageable churn the city is. I remember how early on I learned to break it into chunks - the villages of London, so well illustrated by our entry point at Camberwell. Real life, of course, is always different - but to be reminded that this is practically on my doorstep is never a bad thing.