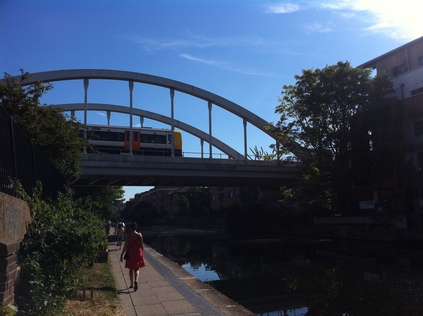 Once again I found myself in London today, again without a firm plan, though not quite as unexpectedly as last week's jaunt. This habit of dashing to the capital runs counter to my original plan - that I'd not even try to visit the city during the Olympics or Paralympics. Having allowed myself a brief wander between the two, I was pretty surprised by just how little effect the games had on me last week, despite an unplanned lurch towards the park before heading off on my canal walk. And it was that walk which provided the kernel of the idea for today. Many years ago, for some lost reason, I found myself walking the towpath of the Regents Canal between Regent's Park and Camden Town. I don't remember quite why or how - but the odd serenity of the walk, and the strange noises emanating from London Zoo's aviary stick in my mind. Then again, years later I found myself stumbling around Colebrooke Row chasing the ghosts of the Lambs and wanting to get to City Road basin, just because it was a curious feature on the map which intruded into my then current territorial obsessions.

Skipping forward to today, I alighted from a bus at Angel Station. The sun was already high in the sky and beating torturously upon London. I got water and sustenance and headed for Colebrooke Row once again, taking the steep curving path which skirts the mouth of Islington Tunnel. On my way down I noted a gent idly pissing against the tunnel end wall while a couple of Japanese tourists sat nearby. It was going to be an odd walk. The plan was to link my travels - to go beyond City Road and to reach Victoria Park where I'd left the canal previously. From there? Who knows... These canal walks have become a little more than just explorations - they have become ways to re-evaluate territory I already know, and quick and easy ways of edging through the choked city above too. I set off eastwards, through the relatively affluent edge of Islington. 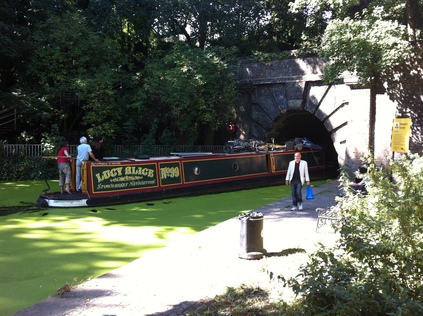 My first observation was how busy the towpath was here in leafy and largely well-off Islington - the canals of the east are deserted on the whole because of the inconvenient and illogical Olympic blockades and the message propagated by LOCOG and TfL that implies everywhere will be impossibly busy. Here though there was a constant traffic of joggers, families and cyclists. Notably they were less considerate than their eastern counterparts too - no bicycle bells rung in warning here, but should you not detect their presence they'd be rung in anger. Some of the overbridges create very tight walking spaces, but the cyclists push on through with little regard for pedestrians. Its a short walk to City Road and Wenlock Basins, where new territory starts in earnest. The banks here are edged with visiting boats which add colour and life to these sometimes eerily quiet zones too. The confused summer of damp weeks and days of intense heat has encouraged algae and there is a green carpet on the sluggish waters as I press on beyond Sturt's Lock and the canal begins a curve towards the south east. It's reckoned by official guides that this section of the route is the least pretty and interesting, but in truth aside from some notable developments which squeaked in before the downturn, its probably the least gentrified section of the canal. This makes for some splendid industrial vistas - tumbledown works, sometimes with their ground floors re-occupied by restaurants or art spaces. As the route turns around the north eastern edge of the city into De Beauvoir Town I'm struck by how many major routes cross it - the New North Road, the East London Line, the A10. The canal was the precursor of any future Ring Road.

I rest awhile near Kingsland Basin, primarily a building site for a new development which against the odds is still underway. Families pass by shading babies against the intense heat. Joggers are reduced to walking pace, heads hung low, sweat drenched backs. They're an attractive bunch out here - and some of them have applied make up for their midday jogs. Perhaps this is how you meet people in the modern city? Pressing on into the backlands of Kingsland Road. The buildings crumble visibly, the canal is littered with junk. There are pop-up businesses here - vintage clothes, coffee, cakes - sold from boats which double as home. An alternative waters edge economy. Threading through South Hackney, the towpath again begins to get congested. The sweep around Andrews Road and the huge gasholders I'd snapped on an earlier walk is a particularly busy stretch - a film-crew idles in an abandoned and decrepit canalside house while Mare Street rages overhead. This is the last stretch now, as the canal draws alongside Victoria Park. It's leafier, cooler and the park draws away the bulk of the walkers here. The last stretch is home to some longer-term residents of the waterway. They sit at the back of their boats, discussing and reiterating, occasionally looking up to see who is passing. Finally, a little before Old Ford I turn into the park myself. I've found my way back to the spot which I reached on my Hertford Union trek a few weeks back. I reward myself with a rest. In the blazing sun of the park, London is doing the same. After negotiating an unwarranted and pointless police check I find a bench, make some calls, receive surprising a somewhat gloomy news. Instinctively, and perhaps ill-advisedly I strike out east across the park. Passing the unnerving Dogs of Alcibiades and cutting through the Night Walk to reach the quiet curve of houses, skirting Mabley Green and not really having any sense of where I mean to go next. A couple of students mess with expensive camera equipment in the long grass fringing the park - everywhere I go people are filming, trying to preserve this strange atmosphere. I come to my senses at the Eastway junction. I can see the route ahead which almost floored me a couple of weeks back. Any further, and I'd be straying too close to the source of my concerns. The last days of the Games are no place for me. I turn disconsolately back and head for the bus stop. 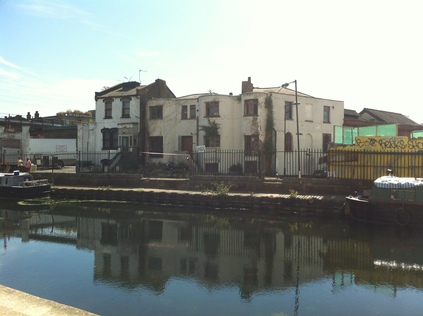 Whilst I hadn't meant to be here today, I was able to use the opportunity and the remarkable weather to cover ground I knew I would need to at some point. These last, heady days of the Olympic Summer have suddenly become significant, the country doesn't want to get back to normal - and the city has been lulled into a strangely calm sense of separateness. Tomorrow there will be speeches, fireworks, music - no doubt tears. On Monday, all being well some hi-vis wearing contractors will remove the barriers from the towpath on the Hackney Cut. That, after years of crossing and re-crossing the site, after failing to understand the nature of the site, was what brought me here. The summer of walking inland waterways - partly by design and partly by necessity is almost over too. There will be no ceremony - just new endeavours to understand the post-Olympic city.