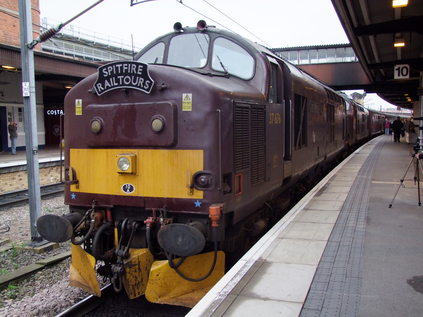 Who'd be a railtour promoter? As the difficult situation with timings continues, there is a huge amount of upheaval in the supply chain just now - with at least one Train Operating Company in the throes of sale, another seemingly keen to commit commercial suicide and a group of promoters which is shrinking. Some of this is an inevitable consequence of the ongoing economic mess in the real world, and some of it is about chickens coming home to roost for those who've been 'playing trains' for a while. In every case though, the great risk is that the customer loses out. That's why it's always a pleasure to do one of these essentially simple trips and see lots of people just enjoying their day out - no moans and groans, petty squabbles or public forum hissy-fits - just a couple of decent locos on a good long run.

It's also a tour from home territory - and thus one I'd always try to support. This year sporting a pick-up at Bridgwater too, the now annual "Jorvic Explorer" trip was rescheduled due to West Coast Railway Company once again overcommitting it's fragile pool of assets. For me that's a bonus as I was detained by the BLS AGM on the original date. Sadly, WCRC also seem to have worked to prevent the minitour to Monk Bretton from taking place, and amidst some very unfair stick aimed at Spitfire, the real story is far odder it seems. In any case, a quick hop to Weston on the first train saw the cafe open early as he'd heard there was a special in. He did a brisk trade in coffee and papers prior to the train arriving bang on time. On to the train, and a good breakfast before heading up the front for a chat and a cup of tea.

In terms of route, the trip followed the pattern set a couple of years back by this run - out via Worcester, avoiding Birmingham, the 'Old Road' to Swinton, then via Ferrybridge to York. Arriving early, there was time to wander the station a little - noting that the model railway building is being refitted as what looks like a rather fine pub - and then out into the rather grey, drizzly city for lunch and coffee. It was busy with tourists, despite being a fairly grim November weekend. Back to the station to catch up with some fellow passengers and watch the world go by before our timely departure south.

The run back will remain in my memory for a long time, as it was the first ever time Bristol Panel have let a charter train both in and out of Temple Meads before due time! Having lost a couple of minutes rejoining the mainline at Chesterfield, we had caught up very well. At Abbotswood Junction, noted we were rather early - and that we got earlier as we sped south to Bristol. It seems that a problem near Birmingham had sent everything via Worcester this evening, and consequently we were ahead of the pack. We finally rolled into Weston around 27 minutes before time - with no doubt I'd make the last train home this time!

Shorn of it's minitour, this wasn't quite the day I'd intended - but it was sociable, the locos performed well, and it was full of content punters - which any promoter is going to be pleased with these days. I hope these 'performance' issues from WCRC are solved soon - but until then, lets hope the promoters who remain serious about running railtours get the support they need from customers.