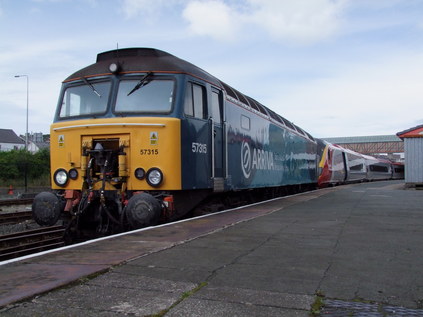 After my comment about the 'feast or famine' nature of the railtour market last week, things took a turn for the absurd. A total of three tours cancelled or redated, with the attendant costs of non-refundable accommodation and travel has left me seriously out of pocket, and unable to do the tours when they are rescheduled. This leaves me for the first time in years with nothing booked with my tour operator of choice at all - a strange feeling and one that left me thinking that perhaps it was all getting too expensive and complicated now anyway? In the midst of this, trying to reorganise things for a now pointless week away and to book things ahead of time, it was a relief to remember I had the second week of my 'drags' to distract me. So, today would repeat an oft-rehearsed trip to the North Wales coast. In the old days, this just wasn't possible in a day - but now it's pretty comfortably so. Having said that, I was of course on the first train of the day once again. A change at Bristol and onto a very lightly loaded Crosscountry service heading north, the odd chap who competes for my seat successfully avoided. A swift change at Stafford and into Crewe early enough to enjoy a coffee in the weak sunshine at the platform end.

It's hard to say how long this loco-hauled service will continue now Virgin have an additional Pendolino at their disposal. A vestige of the old system of swapping locos for the Coast, it was comforting to see Arriva-liveried 57315 trundling into Platform 12 to await the service from London. Noted that this loco had hauled me to Holyhead once before when Arriva were short of units. That day, in packed and overheating Mk.2 stock seemed an awful long time ago as 390023 crawled into Platform 12 to attach to the loco. I found a seat in a surprisingly busy First Class carriage and settled in for the ride.

The coast didn't disappoint, and despite reports of torrential rain and flooding elsewhere in the UK, I saw only a few spots of rain before things brightened and warmed up considerably. Having elected to head back on the loco-hauled service too, I had a little longer in Holyhead than I've had for years, so I decided to retrace my steps from years back out to Newry Beach. Found it much the same as ever, the rocks I'd perched on to read my Sunday paper busy with trippers on what seemed a surprisingly busy summer day for the town. Certainly an improvment on the windswept chill I've encountered here on my last few trips. Took some pictures of the beach and the ships before tracing the road around by the port and back to Town. It was good to be back in some ways - remembering what a haven of peace this had been back in the mid-nineties - when I could have a decent train ride, a cheap B&B and a weekend of solitude here.

Snapped out of my reverie to head back to the station. Another quiet and relaxing ride back, with the sun still strong over the seashore. There is more exploring to be done around here I'm sure, despite the rail routes having been mostly covered - save for the extensive narrow-gauge network in North Wales. Heading into my 'lost week' I hope I can find other moments of calm and quiet like this on my travels.