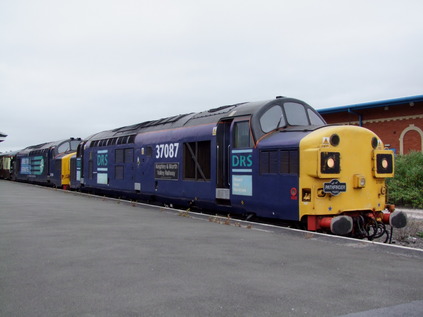 I could have spent a little extra time in bed this morning, but old habits die hard and I found myself heading for the 05:48. This, at least, allowed time for breakfast and coffee before picking up today's tour at Bristol Temple Meads. It's rare I manage to do a tour from here at a reasonable hour, and despite the dubious wisdom of not squeezing out every possible mile given the fairly hefty cost, it felt like a nice, relaxing morning - which after the rather messy and difficult week I'd had, was ideal. A few minutes before time, the tell-tale rumble of an unreconstructed Class 37 could be heard, and the tour rounded the corner into platform 6. Boarded and found myself near some familiar faces. Unfortunately ones who won't tolerate open windows which meant I'd likely have a sleepy and quiet day. In any case, concentrated on the journey ahead - pausing to have a few minutes at a drop-light through Highbridge and Bridgwater where a few familiar faces were in evidence. From here, it was a fairly straightforward dash down through Exeter and over the South Devon Banks to Plymouth for a brief leg-stretch before doing the unusual connection from platform 8 southbound, back onto the mainline.

The first object of today's jaunt was Goonbarrow Junction - the complex of china clay sidings just off the Newquay branch. Given that this wasn't a BLS tour and Pathfinder's history of 'paperwork' issues, most of us expected to reach the Network Rail limit and no further. As we creaked and groaned into the yard of Rocks Dries with the concrete pad white with kaolin, I was surprised to note we were continuing into the sidings. We ended up close to the buffer stops, as physically far as the train could reach. Much impressed we awaited the reversal and the run through St. Blazey yard and down to the stub of the Par Harbour branch. As we came to a halt at the road bridge, pretty much where previous tours have reached in fact, I was again rather shocked to find the driver edging forward once again. Passing the Stop Board which marked the start of Imerys territory, we progressed into the complex, coming to a stand well onto the concrete apron near the loading point. Discussed this rather unexpected outcome with my BLS-member table-mate as I spotted a 'Pearns of Par' van in the docks. The pasties had arrived!

After a very long queue for a very good pasty, I settled back in for the next part of the run. A reversal back into St. Blazey, then back onto the mainline to Lostwithiel where we passed slowly through the station and came to a stand in the Up Goods Loop. Once we'd reversed and crossed over the mainline, we began the descent beside the river towards Fowey. Besides being interesting from a railway perspective, this was a stunning run through fine countryside. A boat flying the Saltire kept pace with us as we wound alongside the river through the pretty and tiny village of Golant, which a spellchecker had rendered as 'coolant' in the tour notes! Noted the crowd of drinkers at the Fisherman's Arms out to cheer us on too. Eventually we came to a halt at Carne Point, beyond which passenger trains are forbidden. Once again, we'd gone as far as possible - which was shaping up to be the order of the day. A swift reversal before we headed back to the mainline at Lostwithiel and gathered pace back towards the Royal Albert Bridge and civilisation.

Another brief stop at Plymouth in drizzle and gloom followed, before we set off as far as Lipson Junction where we curved to the right, passing the back of Laira Depot and heading back towards the city. As the tidy but clearly no longer used Turnchapel branch descended to meet us, we realised that once again we were pressing on to the very end of the network. As the former site of Plymouth Friar, the Southern Railway terminus here, opened out, we halted at the buffer stops just short of an impressively proportioned road overbridge. The city centre was a couple of hundred yards beyond - much more convenient that an arrival at distant North Road station! No time to rue the passing of the station though, as we headed back towards Great Western metals and Mount Gould Junction. Here we took the right hand fork onto the 'Speedway Line'. Installed when Laira became a diesel depot, this line divides the main depot from the sidings, and links back to the mainline at Laira Junction. Once back on the mainline we started from a near stand to assault Hemerdon Bank. A noisy, smoky and very satisfying climb indeed. 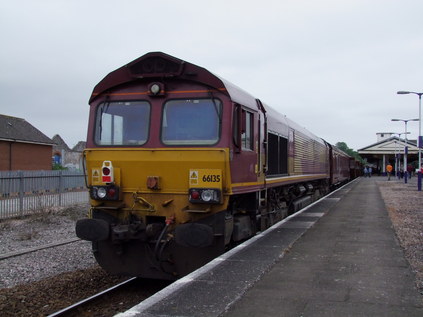 Once back in the Exeter suburbs we slowed near the rather bleak St. Thomas station to reverse again, this time reversing onto the Alphington Road siding, formerly the line to Heathfield and Newton Abbot avoiding the sea wall section. Dense foliage permitted very little view of our surroundings, but I understand we reached the edge of the scrapyard which this tiny stub now serves, and almost got as far as the large Sainsbury's now built near the trackbed. With the 37s now leading for the ride home, we stopped briefly to set down at Exeter St. Davids before passing through Riverside Yard on the Down Goods line. I readied myself to disembark at Taunton, happy that the day had been a huge success and an enjoyable trip.

A quick - but painfully expensive - ticket purchase at Taunton, then on to a waiting hired-in London Midland Class 153. A bunch of locals were complaining that the train hadn't left yet - despite it not being time for another 15 minutes or so - and the otherwise very well refurbished unit had obviously taken a battering down here, being strewn with litter and torn seat covers. I missed my comfortable Mark I FO as I trundled home.