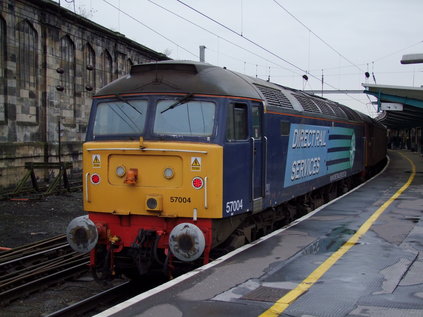 Coming hot on the heels of my trip to Glasgow, I was almost entirely unprepared for this weekend's jaunt. This was the first Spitfire trip of the year as their Scottish trips had unfortunately been cancelled. I was so unprepared that I found myself rearranging things yesterday to get to Bristol in time for the journey north, however I'd usefully ended up booking a meeting not far from Temple Meads, and in the end had a fairly smooth journey up. Just like the last of these multi-traction tours it meant a very early start from Birmingham. Joined the train at a surprisingly busy New Street to find the usual contingent already on board. Set off via the Whitacre Junction to Kingsbury Junction diversion, with 57004 and 57601 leading the train. Noted as we sped north that it really wasn't getting much lighter - especially in our coach where the batteries were damaged to the point that we only had light and heat when the train reached a reasonable speed. Things soon warmed up indoors, but as we passed Chesterfield, the rain which had been whipping by the train turned very swiftly into fairly sizeable snowflakes. Arrival at Sheffield was under a surprising carpet of white, as we had a brief break to reverse and I made a dash for better coffee on the concourse!

From here, the tour took the tried and tested route via Hare Park and Crofton to reach the Leeds suburbs, avoiding the station by way of the Whitehall curve. With 20309 and 37409 now leading, we made steady progress towards Skipton passing a succession of electric units. We'd once again discussed the dullness of the Settle and Carlisle route in railtour terms, however it was a little more interesting to see it with snow capping the peaks. As predicted, the usual scrum for a droplight to record the crossing of Ribblehead Viaduct ensued. Stayed in my seat and dozed and chatted my way happily north towards Carlisle. 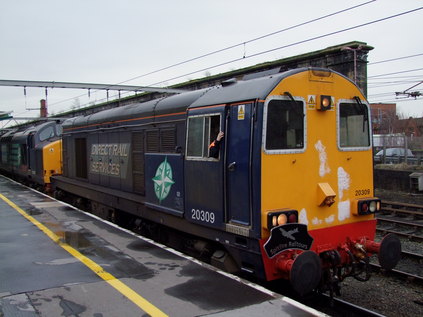 A brief break here to get food and to stock up at the local shop which sells a good range of local beer. Back to the station for a pleasant chat with some veterans of last year's Highlander trip. Headed over to the platform to see which locos had been turned out for our return, and was greeted with the rather surprising sight of two Class 66's topping 57601 which was sticking around to provide ETH. 66417 and 66418 were to lead the service through the Tyne Valley to Newcastle - a pair of engines which practically no-one would be able to claim. A fairly swift run, and this time a sensible chance to get out and photograph where possible before we once again reversed with 37667 and 37409 leading us back to the Midlands via a similar route. Amazed to find a third railtour in a row producing an on-time arrival, and spent some time chatting to staff before the tour was despatched for the short run back to it's origin at Birmingham International.

Today wasn't about breaking new ground - although I did get a good few engines in the book. No, this was more about meeting up with old pals, drinking too much and enjoying being back into the swing of railtours once again. There are some really exciting events coming up, and I hope to be along for a fair number of them.