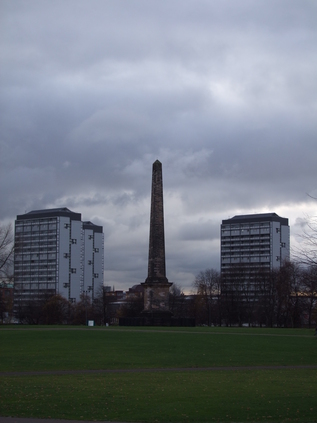 The concept of the Lost Weekend isn't a new one - but it's not reared its head here for a while. In simple terms, these strange and often rather desperate dashes across the country occur when I find myself with pre-booked tickets and accommodation for an event or tour which is cancelled. In 2009, when it seemed nearly every tour by some operators was pulled at the last minute, it was left to the likes of Spitfire to keep flying the flag. However, there were a good number of things which just didn't happen. I began to view it as a natural hazard in a hobby which required more and more desperate action to get to interesting tours which might just run. Unsurprisingly, given my preferences and history, an inordinate number of these Lost Weekends have focused on Glasgow.

Having said that, I've documented previously the frustration of being in the city for a short time. Unable to plan much beyond an aimless wander and pushed for time so that lingering and absorbing the city in the way I've grown to love is near impossible. Today though, waking and wandering up to a chilly Wolverhampton station I felt genuinely relaxed and unconcerned. Having spent a lot of time in Glasgow just a month ago, this felt less like a mission and more like the pleasant little daytrip it was. Onto the 07:37, which didn't really get busy at all, and off up the West Coast. We passed out from under the carpet of fog somewhere around Stafford, and clear blue skies and freezing temperatures seemed to be the order of the day. Headphones on, coffee in hand and nothing to do but relax and watch the scenery pass by on perhaps my favourite rail journey.

On arrival, I almost skipped off the train onto the familiar turf of Central Station. Happy just to be back, even if briefly. The plan was to kick off with a coffee in a favourite spot and to watch the Saturday morning crowds pass by. Despite being chilly, the locals were out in force and there was a sense of a positive, bustling city centre I've picked up elsewhere in the UK. I sometimes think on days like this that the economic gloom is a manufactured response to a crisis which hangs over us thanks to the last government. I know times are tough - but this seems to be a relative concept. It felt wrong to speculate on this whilst my own fate, along with thousands of other public sector workers hangs in the balance. I finished my coffee and plunged into the crowds. Next stop was Love Music, formerly Avalanche Records. I picked up a couple of CDs which I just couldn't have easily got down south, then pressed on again.

The rather unexpectedly formed plan was to head eastwards again, and to wander on Glasgow Green. It was many years since I'd done this, and since it wasn't raining and Glasgow had settled into one of it's silvery winter days it seemed like a sensible plan. I set off, trudging through Merchant City and stopping to pick up supplies, before turning into Saltmarket and heading for the Clyde. The Green is impressively large, bounded on one side by a elbow-shaped curve in the river, and on the other by London Road which rather suddenly stops being a main road into the city centre, and becomes a range of low-rise residential properties. In the centre of the Green, the People's Palace stands proudly and rather ceremoniously. All the paths seem to eventually lead to the huge building with it's elegant tropical extension - an echo of the Kibble Palace in the West End perhaps? I sat to picnic for a while on a bench, noting that few others were out this cold morning. Returning kayakers headed for the dilapidated but still functioning boat shed, and the occasional walker or cyclist passed by. I watched the tidal weir for awhile, now listed I understand, and leading to the division of the Clyde into two distinct eco-systems. Glasgow still has the ability to surprise me, as this quiet green oasis proved.

It was time to head into the Peoples' Palace. Just a short visit as the thought of a museum tea-shop wasn't on today's agenda. The formal space indoors echoed the careful layout of the park outside, but with none of the sense of space. After the briefest of chats with a guide I tumbled back out of the revolving doors and decided instead to capture some pictures of the Green and the Palace, before returning to the city. My route back took a detour through The Barras. Again, its been a few years since I headed this way - and the place is still as amazing and confusing as ever. I've never strayed this way in the summer when it's said to teem with even more life - but it's hard to imagine it being busier or more diverse in the range of goods it sells. There was a distinct reek of expensive soap in the market today, which led me to wonder which local branch of Lush had suffered a break-in recently?

And so, snaking my way back into town, coincidentally via the route of the buried Molendinar Burn which occupied my thoughts on a previous trip. It was now frustratingly hard to get around the busy streets as I searched in vain for a chance to sit and contemplate my walk and watch things go by. In the end, settled for Queen Street station where I watched people heading for the Far North from a quiet corner. I was comforted by the knowledge I was already planning my next trip back here. These Lost Weekends have sometimes not been successful and have left me feeling disconnected and strange - but despite facing a long dark trip back to the Midlands, this one felt like a success.