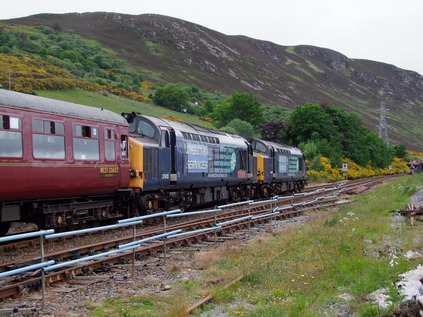 Another very civilised start meant time for a leisurely stroll down to the station, enjoying a decent coffee and watching Inverness slowly waking up on a sleepy Sunday morning. The day was already warm, but with overcast skies - particularly to the north where we were headed. Arrived at the station to find the stock already in the platform, and took the opportunity for another snap of these workhorse locomotives as they waited to head up into the far north. Today's trip was, on paper, fairly simple - a run up to Wick, a reverse to Thurso and back to Inverness. A long haul, curving back and forth through the Highlands, with a late return to civilisation.

We set off by retracing yesterday's steps over Clacknaharry Swing Bridge and through Muir of Ord to Dingwall, before taking the far north line and turning east to follow the shore of the Cromary Firth. Swinging north again, we hugged the coast once more following the narrow band of settlements which crowd along the coastline here, through Tain and around the end of the Dornoch Firth, before taking a great loop inland and back out towards the coast. Almost doubling back on ourselves, we again found the east coast at Golspie and stayed alongside the North Sea as far as Helmsdale. Here, at the foot of the Highland Mountains, we paused. Took the opportunity to cross to the other side of the track and take some shots from the lane alongside the Network Rail yard. The wind was whipping in from the sea, and a few spots of rain had begun to fall. Great black and grey crowds rolled overhead and the sense of being somewhere very remote and far from home came over me suddenly. The village of Helmsdale is a little way from the station, so I didn't get to see the monument to those who emigrated during the Highland Clearances. Once back on board after some fine, atmospheric photographs had been taken, I accidentally initiated a bit of a discussion on the clearances too. Interestingly, as we headed inland into increasingly bleak terrain, a hush descended on the train which had been a very sociable affair until then - hopefully not as an effect of my historical ramblings.

37608 and 37610 under brooding skies at Helmsdale
With the barren Highland countryside slipping by, I thoughtfully sipped hot coffee and wondered where the strong June sunshine had gone. People seemed to be staring out, almost transfixed by the emptiness, broken only by the battered snow fences. The small settlement of Halkirk, devoid of a service since the 1960 cull of stations on the Far North Line, slipped by and we were soon arriving at Georgemas Junction. Nominally serving Halkirk, and for many years the point where trains split to form separate Wick and Thurso portions, the station is in a grim, empty situation with a small building maintained for the use of rail workers. Here our locomotives were separated and ran around to top and tail the train on the next sections of route, and this allowed some time for the passengers to scatter down into the expanse of waste ground to get some fine pictures - my own less skilled efforts will no doubt appear below too. Noted the felled container gantry, a vestige of a short-lived project to bring supermarket produce north from Inverness. By now a steady drizzle was falling and black clouds were tumbling over the hills will alarming speed. In just a shirt, having recklessly left my coat back in Inverness I could feel a keen wind whipping by. Despite the chance to stretch my legs and exercise my camera, I wasn't sorry to get back onto the train and press on with the short journey towards Wick.

Having visited Wick before, I made a familiar wander into town, via the local supermarket and newsagent. As a wet Sunday afternoon headed towards evening, the town was quiet and empty. Straggling groups of passengers from our train could be seen wandering around this slate grey outpost, grateful to be on terra firma after the long trek north, but just slightly bewildered by how quiet the town was. After making a 'phone call home I headed back to the station where the leading loco was noisily filling the small wooden trainshed with diesel fumes. Time for some pictures before getting back on board to await the returning passengers and head off once again. Passing through Georgemas Junction once more, we headed along the line to Thurso - the most northerly station in the British Isles, and somewhere which I'd not really explored on my last trip here. The line swung into town beside the river, and the town looked sizeable - perhaps a little bigger than Wick. Once out of the station after a few symbolic shots of our loco on the buffer stops at what is truly the end of the line, I walked into the town. With no real plan, I found myself heading down the main street and onto the short stretch of sea front. There on the shore I could see the North Sea crashing on the nearby rocks, and despite the gloom and threatening clouds there were good views of the ferry port at Scrabster and the distant shadow of Dunnet Head, the most northerly point of the mainland. A father and son who'd travelled up sat nearby on a bench, silently contemplating the end of the line with me, and I couldn't help but call to mind the Frightened Rabbit song Swim Until You Can't See Land and wonder if it was written nearby? Turning back towards Britain I noticed that the sea front here was different to the usual resorts which proudly face out towards the ocean. The view here was of back gardens, washing lines and quiet, closed windows. Thurso faces inwards, huddled against the cold and the dark seas. A walk through the town confirmed how quiet and empty the place was - though it's probably unfair to judge anywhere on a Sunday. There was, for example a little buzz of life around the Cooperative Food store, where I had a pleasant talk with the cashier about the longest day of the year. She parted with a pleasant "see you again" but I supposed there is no likelihood or reason I would? I realised the strange atmosphere of these northern climes and the symbolism of the journey all the way to the end of the line was getting to me. I bought local beer and headed back to the station through the deserted town, just as a fancy dress party spilled noisily and colourfully out of a bar and onto the street. 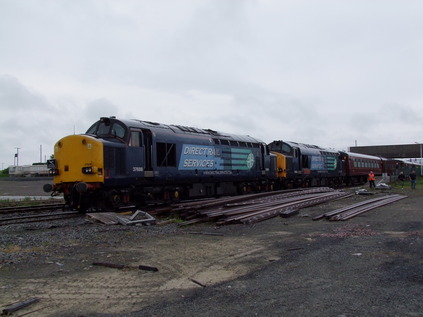 37608 and 37610 await a change of ends at remote Georgemas Junction
After another journey back to Georgemas Junction and a further run around and complicated shunting manoeuvre we were soon underway again with the locos double-heading southwards. It was interesting to note people gradually regaining their exuberance as we returned slowly to civilisation once again. Despite being a fairly rational creature, I strongly believe that place and space has a surprisingly marked effect on us, and there is something crushing and quietening about the journey to the Far North. Perhaps I think too much about such things, but today was as much of an experiment as I'm ever likely to be able to perform to prove my theories. As we repeated the traversal of the Rose Street Curve and propelled into the platform at Inveness on time and at a little before 23:00 still in a fair amount of daylight, I recalled that I last made it to the network's most northerly extremities back in 2006. On that occasion not everthying went to plan but I note I recorded a day of 'mixed fortunes and lasting impressions'. Today's excursion amplified those impressions - a fine day of interesting travels and complicated thoughts, and a fitting end to the time in the Highlands.
Movebook Link