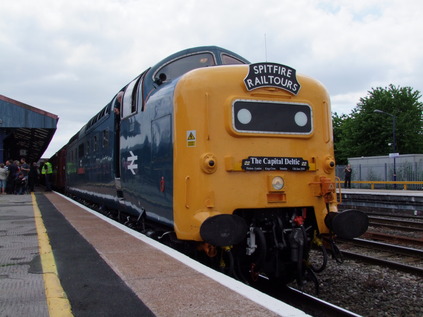 Week 5 of my accidental summer tour, and so far things seemed to be going pretty well despite the much publicised issues with timings from Network Rail. The major difficulty has been getting away from work as planned, since my job has changed so much since some of these trips were mooted - and this will only get more complex in the coming weeks. Spent much of yesterday's journey up to Manchester in some form of work based activity - and if not 'doing' I spent plenty of time 'brooding' - which culminated in an emailed explosion of frustration as soon as I got near to a proper keyboard. Not a good start to the trip, but sadly a necessary one. This meant most of yesterday written off, and a strangely poor night of sleep. At 05:30 as I slithered towards Victoria on pavements littered with discarded take-aways and birdlime, this felt like it was going to take it's toll today. Naturally, no facilities were open at this early stage so the urgent supply of caffeine which might just have helped was delayed. The timings didn't really allow much time for off-train purchases on route either - although I noted one brave soul manage the dash to the cafe at Huddersfield!. However all thoughts of this were banished as the gleaming nose of 55022 appeared on the approach to the station. Towards Miles Platting bank the sun was picking out the rails ahead in a glorious blaze. This was going to be a fun trip indeed.

Found my coach - an opulent Pullman affair with little room for storage but very plush decoration. Also met my travelling companions for the day - a quiet family with a rather miserable, northern friend who managed to find a reason to complain about almost everything, to the point I was suppressing laughter almost immediately as I turfed him out of my facing seat into his own. Moments later, with a lurch of power, the Deltic set off towards the Pennines. This was a really thought-provoking moment - all these years after chasing this loco gave me some of my first tastes of the hobby, it was back on the mainline and heading for it's former stomping grounds on the east coast. Celebrated with breakfast and coffee, before snoozing a bit as a result of my poor sleep. This seems to have dogged the last few tours - and I'd almost put it down to a sort of 'tour fatigue' - however, I think it's a combination of heat, sleeplessness and not having to be sociable as they've been solo efforts. In any case, it was pleasant to doze quietly and then wake to hear the rumbling of a Deltic at speed on the front of the train.

After picking up at Wakefield and Doncaster, we headed south towards London at speed. The timings were a little slacker than I'd hoped, but we still managed some very quick runs indeed. I was entertained at this point by my neighbours planning their day out. Each plan of action - involving the Trooping of the Colour, tour buses or whatever - would be proposed and generally approved, before the miserable one would intone "how much?" or "that's a long walk though" and scupper it. They were still pretty uncertain as we thundered through Peterborough, and hadn't really agreed anything by Alexandra Palace! Soon, we were creeping out of Gasworks Tunnel to be greeted by hundreds of photographers on the platform ends. Here, lots of the daytrippers like my neighbours left, and a fair number of cranks boarded. No time for a photograph given the scrum, before we left again with 57601 on the rear dragging us out as far as Hornsey Down EMU Reversing Siding, where 55022 took over again and we rounded the tight curve to Harringay Park. The North London Line is always fun for me - with it's intricate links to other routes and viaduct running over the rooftops. Enjoyed the journey immensely as we curved towards the Great Western Main Line at Acton Wells. Not strictly Deltic territory of course, but good to have some further speedy running out to Reading and Oxford.

Finally managed a few photographs on arrival at Oxford, though even here things were a bit of a crush before the stock left for the sidings. Headed into town in search of coffee and air-conditioning found both in a cool, quiet place in a little square not far from the station. Relaxed and contemplated the day so far, before buying some provisions and heading back to the station. Grabbed a further coffee here, and stood on the platform chatting and soaking up both the bright sunshine and the atmosphere of occasion present. Soon, having run around the stock, 55022 appeared once again to retrace our steps back to Hornsey. Following another reversal, we took the flyover at Ferme Park before using the Up Goods line. It was on this that we stopped - and waited. Waited some time in fact, watching both our arrival and departure times slip by. It seemed that a broken down Adelante was occupying Platform 1, and with the new Platform 0 barred for diesels and refurbishments blocking two others, there was a pressure to keep timetabled trains running. Eventually got underway, passing the offending unit looking a little healthier as we headed into the station to pick-up the trippers. Several cranks left pledging to be on the next Deltic trip north on 11th September!

One side effect of the late running was a need to make up time, and this produced some very fast running indeed. As the evening cooled a little, it was really fine to be speeding north with the Deltic singing away on the front of the train. My miserable neighbour also initiated a long discussion of the catering arrangements, and was upset because he'd already had a "ham and cheese" before he became aware that hot pies were available! Despite the best efforts of all concerned, we didn't make up quite as much time as was hoped. At Doncaster we came to a complete halt, as did another Class 47 hauled charter on the adjacent platform - producing what someone referred to as "an 80's timewarp!". We sat for some time here, and it became clear there was a problem. Finally we were informed that due to our late running and a signalling issue at Wakefield Kirkgate, we'd be diverted via Westgate and Leeds. This meant missing the Shaftholme to Knottingley section of the route, but was quicker. My neighbour of course misunderstood geography entirely and thought this would add a further hour onto the journey. Settled in for the final spin of 55022 up to Leeds, where we arrived to find the station full of casualties from the celebrations of England's lacklustre World Cup performance. A long wait for a reversal here, with 55022 shut down and 57601 fired up to take us back to Manchester. Noticed that the "Deltic has failed" posts took almost no time at all to reach the internet though, however these were soon corrected!

There was still a little light in the sky as I wound my way through the crowds for the last trains from Victoria back to my hotel. It had been a long day, but a fine one. To be out in the summer sunshine with 'Royal Scots Grey' leading the train had been a real treat. Thinking about the next few days of work is daunting - but if all goes well I'll be heading for the Highlands soon. It can't be hard to understand why I do this, can it?