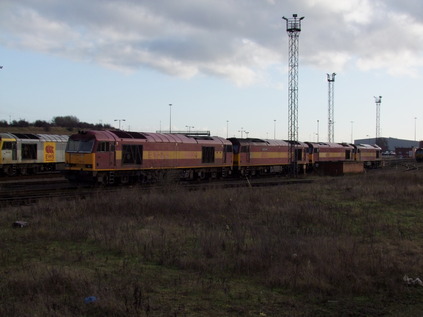 Having done some absurdly early starts lately, it was a comparative luxury to rise late and make my way the short distance to Birmingham New Street for this trip. Pathfinder's annual Christmas 'spin and win' has become a bit of a tradition for me too - and in the past has seen me struggle through freezing Swindon streets or paddle across drenched Reading city centre. The tours are generally organised around the plan of a southern start, picking up at a fair number of stops before heading somewhere unusual and further north, with the obligatory changes of traction along the way. Having toyed with an early morning slog down to Cheltenham Spa to get more mileage behind 59204, our first loco of the day, I decided on the later start as we'd have the 59 with us until Kettering in any case. Thus, a little after the due time we made a start from New Street, staying close the the wall as we negotiated the tunnel and then crossing onto the Derby lines at the last moment. Only a few minutes of movement before we came to a halt in the Up & Down Lawley Street Through Siding, where 56312 waited to join the rear of the train before we pressed on via Water Orton towards Nuneaton. Much of the early part of the trip was spent mopping the condensation from the stock windows - another age-old tradition when the temperature outdoors drops! Amazingly, as we travelled east and then turned south onto the Midland Main Line, the sun managed to creep out from behind a blanket of grey cloud which seemed to be covering the West Midlands, and aside from a shower during our brief stop at Kettering, managed to stay with us for much of the day.

At Kettering, the train changed direction which meant 56312 leading us north while 59204 was left at the station to rejoin the train later back at Birmingham. However, with a fair few carriages at the front being off the platform, achieving a photograph wasn't going to be easy. Once the entire contents of the front two coaches had tramped by, used the opportunity to visit the grill car and enjoy a slightly later than planned breakfast. Soon off once again, heading through the new station at Corby and crossing the Harringworth Viaduct on route to Manton Junction. Here, we continued north towards East Midlands Parkway and the complex of junctions at Trent. Our booked route was via the High Level Goods lines, passing over the Nottingham line and descending into Toton Yard where one of the fast-dwindling fleet of Class 60s was due to be added. Pleased to see celebrity 'Army' liveried 60040 running and ready to be hooked onto the train. Some concern though, as this manoeuvre took place on the goods lines and we'd been booked to head onto the Mapperley Goods Branch. After a history of 'paperwork issues' with these rare sections of line, many of us onboard for the track began to fear the worst. However, things turned out exceptionally well for the connoisseur of unusual track. Firstly, once the 60 was safely attached we began to head along the Mapperley Goods Branch as planned, making slow progress alongside the main running lines, pretty soon, the train began to curve away to the west, the rarely used track creaking and protesting. On we travelled, under the motorway, with a couple of brief stops for the traincrew to clear debris from the line ahead. Eventually, we came to a halt at an open crossing not far from Stanton Gate Pipe Works. No-one had expected to get quite this far along the branch, and there was much congratulation for the driver who had pushed the loco right to the traversible limits of the line. After a further change of ends, the 60 began hauling us slowly back to the mainline. We had to slip into Toton Depot now to reverse, and the Loco Arrival Line was the booked point. Again, we didn't expect to get far into the depot - and again we had a surprise. The train slowly crossed into the complex, passing lines of stored Class 60s along with a few other interesting locos in varying states of decay. Still we pressed onwards, the line curving to allow further sightings in the compound and behind the depot buildings, before coming to rest right at the buffers. Another success, some slightly disparaging remarks from the non-track oriented among us, and a bit of a delay as we once again set off northwards!

After saluting a Peak waiting with it's train on the Midland Railway Centre's line at Ironville Junction, we curved east again at Pye Bridge, taking the line leading to Kirby-in-Ashfield and the Robin Hood line. I hadn't done this for link years, and possibly not in daylight if I recall correctly, so rectified that with a pleasant trundle through Nottinghamshire countryside. At Shirebrook we noted the part-demolished former Depot, before taking the line to Welbeck familiar from the Branch Line Society tour in July. The original plan had been of course to progress all the way to High Marnham and the new Rail Vehicle Development Centre. As it happens, the reversal would now take place at Tuxford, a little shy of the end of the line - but still further than I'd managed before. As the afternoon sun sank below the horizon we made incredibly slow progress towards Tuxford, with a large delay mounting. No-one seemed to mind too much, except for those who had onward travel issues. Noted that a couple of gents near us hailed from Bridgwater and had driven up to Bristol Parkway. Not sure now if I was more envious of them getting home albeit somewhat late, or pleased that I had a warm, comfortable hotel waiting in Birmingham!

After a reversal, and with the Class 56 once again in charge, we returned to Shirebrook, turning north and now very much in the dark as we headed for Sheffield and a brief unplanned set-down for some passengers who would otherwise struggle with the delay of over an hour we were now carrying. We pressed onward, onto the Erewash Valley line and once again towards Toton. At this point, a railtour regular piped up from the end of the carriage "y'know what? This tour hasn't really BEEN anywhere!". Understood what he meant as a spin via Trowell Junction, Radford Junction and the Lenton Curve once again found us facing north and stopped outside Toton Depot while a further loco joined our train. This time it was impeccable rail blue 47270 which topped 56312 and led us via Trent Junction to the freight-only line via Castle Bromwich back onto the main line at Burton-on-Trent for a final run into Birmingham New Street. 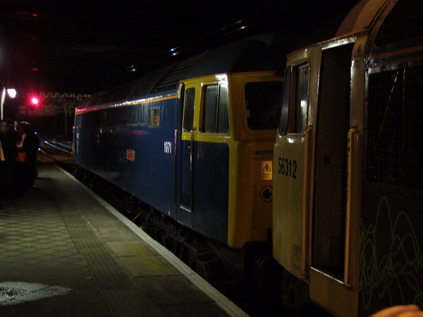 Again, the long train stretched beyond the platform and way into the dark at New Street, so photography was limited as it always is on such trips late in the year. Watched as the 47 and 57 roared off into the night, and wandered back along the platform as those travelling back south remained onboard awaiting 59204's return. Despite 'not going anywhere' we'd managed some interesting track, a rare view into Toton, and had a decent day out in good weather and fine company. As I await the 2010 programmes from the major railtour operators, and contemplate the cancellations which seem to be cropping up everywhere, I can only hope there are more of these journeys. For now though, I was happy to get back to my warm, dry room after a successful day's travel.