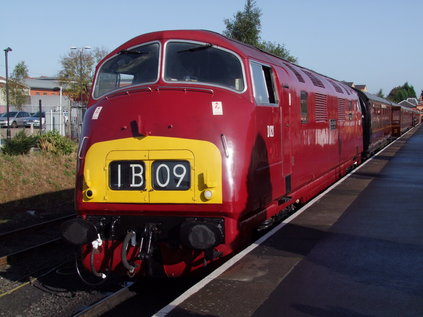 A Gala Against All Odds - A Severn Valley Story

A huge amount of discussion seems to have taken place about the Severn Valley Railway's gala this year. Right back when the weekend was originally announced, there was a spirited exchange about the railway's supposedly anti-diesel sentiments, reflected in the way that some staff behaved or a bloody-minded refusal to hold connections. I couldn't personally say I'd experienced this on my brief visit back in 2004, which seemed to focus on the range of locos in attendance and the excellent beer on offer. However, the events of the past week or two have provoked further debate, with the unfortunate derailment and subsequent emergency repair at Highley loop fuelling more than one conspiracy theory. Bottom line was though, that the gala would be smaller than planned and the service less intensive. Cursing my usual October luck, I decided to stick it out and visit as planned. I've really enjoyed my trips to the Severn Valley - despite a harrowing introduction as a youngster - and this would make for an interesting and relaxing weekend before a solid few weeks of intensive travelling.

I didn't reckon of course on the combined forces of our local rail operators, who also seemed to be conspiring. Having arrived at the station in time for the 05:50, I watched with dismay as it went from an on-time departure from it's first station to a 14 minute late arrival. Given my restricted ticket and a much reduced timetable, I was going to have a tricky time getting further north than Bristol this morning. However, I arrived to find platform 3 at Temple Meads still busy with passengers and a catering trolley waiting to load. By some strange quirk it seems that a rostering error had left the train driverless. It finally left, 15 minutes late with me safely on board with breakfast and coffee to boot! Running out of path on a diversion via South Wales was never going to be easy however, and we finally reached Kidderminster via a hastily amended route to Birmingham New Street, a cross-town dash to Moor Street and a unit from there onwards. Finally arrived about twenty minutes after we'd have made it via the planned route, already feeling exhausted by the reorganising and some tense moments around connections!

D821 'Greyhound' waits to leave with a Bewdley shuttle

On the journey up I'd predicted we'd probably end up with D821 on a train, and sure enough there it was, quietly chugging at the front of a rather smartly turned out rake of LMS stock. Got a picture, and walked back to look at 50026 which was stabled beside the train. This was the one time that I noted staff being anything less than friendly, when one of them shouted after me that I wasn't allowed to take a picture where I was standing. It seems that someone had left a barrow full of second hand books and magazines nearby and he thought I had some sort of devious plan to steal them as I photographed the loco! Soon on board D821 and heading for Bewdley. It has to be said, the timetable was a mixed bag. Lots of shuttles to Bewdley and Highley which meant the ability to fairly safely switch trains. However, the steam diagram which the SVR insists on running on the Saturday of diesel events was unavoidable. If you did a trip to Bridgnorth, you just had to do the steam train back. This became more frustrating as the day went on, and we found ourselves steaming down to Kidderminster on a couple of occasions as very rateable traction passed in the opposite direction. It was certainly not going to be one of those "get everything" galas this time!

In the end, settled for impressive runs with the pair of Class 20s, D1062 and 37906. The 37 in particular was noisy and made light work of the demanding line. Settled back and enjoyed far more Batham's Bitter than was probably advisable whilst the misty morning became a very warm and bright afternoon and the engines echoed down the valley. 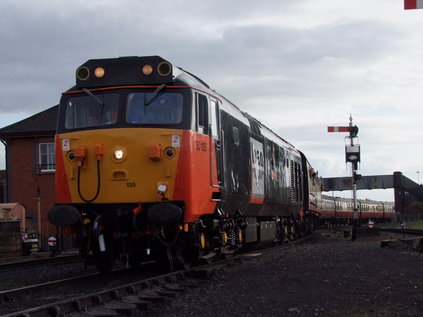 50135 snakes into Kidderminster with an afternoon train

After a final arrival at Kidderminster and with no sensible move which would get us back before the train to Birmingham, stuck around to photograph 50135 arriving in the sinking sunshine while a pair of shunters prepared to haul another shuttle train. Soon onboard the unit for a slow and sleepy trip back to Moor Street. Some further silliness around the arrival and departure of the 18:12 to Bristol at New Street too, but finally sorted and away a few minutes down. Watched an amazing red sunset over the Malverns, recalling my many years old tradition of watching these Autumn skies on my trips homeward. Chatted to an interesting new acquaintance too, who worked in similar fields to me and reminded me that times were busy and tense for everyone in public service - a valuable lesson delivered with great tact and grace in fact. As we covered the last leg of the trip, reflected that today had been an entertaining day despite the problems and complications, all of which were outside the control of the organisers. It's always a shame to see fine engines passing by - but that's always going to be the difficult part on a line of a fair length like the Severn Valley. Next time though, perhaps a weekday visit and some local accommodation might be in order?