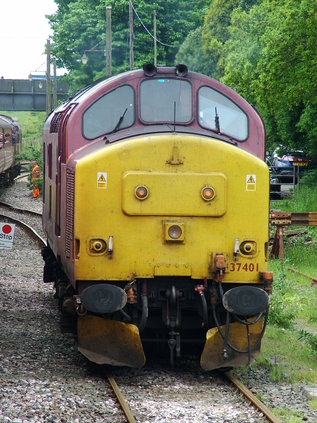 The great joy of summer railtours is starting out in daylight. Even at 05:30 on a damp morning in Crewe, there is a little light in the sky and perhaps a promise of better weather to come. Slunk about sleepily for a while, waiting for the stock to arrive. It was a strangely busy day here yesterday, and for the first time in a long time I had the chance to spend some time at the end of a platform just watching the railway working. On a much quieter morning I was more concerned to get on board, curl up in my seat and let the day get underway. Eventually the train arrived and preparations were made to run the locos around for our departure. As promised 37401 and 37670 were on the train - the latter particularly poignant as 'St Blazey TMD' was going home to the depot after which it was named for the first time in many years. Found my spot in a comfortable Mk II carriage and prepared for the long trip southwards.

I'd decided when this tour was originally announced that I wanted to do it from Crewe, despite it making pick-ups nearer to home. I always enjoy the run down the West Coast Main Line, and rarely get the opportunity to do it behind decent traction. Oddly, with last weeks tour diverted this way, I ended up making the journey for the second time in seven days. After a speedy start we made good progress towards Birmingham where the curve to the Camp Hill line gave us a first glimpse of the locos hauling the train. On to Cheltenham, where a signalling mix up saw us head off a little early surprising at least one passenger! This saw us looped on the bidirectional line near Gloucester Yard Junction, before heading off again at speed for Bristol. One last pick-up here before we headed non-stop to Plymouth. Took the opportunity to poke my head out of the window carefully around Highbridge, and spotted a local taking pictures at the platform end. Not sure which of us was more surprised.

We didn't appreciate at the time just how many disasters this tour avoided during our outward trip. Firstly, checked briefly at Taunton before roaring off southwards, we had no idea that the huddle of Network Rail and British Transport Police vans at Fairwater Yard were in fact dealing with a serious incident involving someone brandishing a gun. Nor did we realise that the mainline through Devon had been blocked by a fallen tree at Ivybridge until a little before we passed by, likely the first train to pass without delay this morning into Plymouth. A rather special moment next as we passed over the Royal Albert Bridge, just a couple of weeks after it's 150th birthday celebrations. Now into Cornwall proper I relaxed and enjoyed the scenery as we wound along the mainline to Burngullow Junction, where we peeled away from the mainline and performed a run round at Blackpool China Clay dries. Now top and tailed and with 37670 leading, we tackled the steep gradient on the branch to Parkandillack. The loco, despite it's rather dilapidated appearance put in a sterling performance, and we were soon at the end of the branch. A chance to consider the plan mooted back in the 1990s to make this the mainline to Newquay in preference to the long and convoluted run currently undertaken. Soon off again, and heading for Par where we disembarked and watched the train disappear onto St Blazey depot. 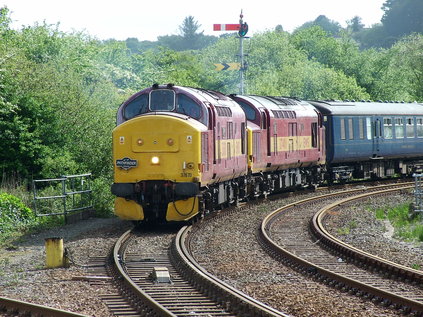 Faced with an hour in the rather small town of Par, I headed out into the warm afternoon. A quick dash down the path, past the chippy, and on to the level crossing leading into the depot. The nose of 37401 could clearly be seen poking out of the foliage. Walked further, into the neighbouring industrial estate but found no photo opportunities. Pressed on around the depot perimeter, noting a slumbering 66115 in the gloom but little else beyond stored wagons. A shame to see a once busy depot looking so empty. Decided to walk back around the other side of the depot to the station in time to be caught in a huge rainstorm. Decided to press on as it was as far back as forward, and found shelter on the platform with a sizeable crowd of cold, wet tour passengers! The return of our stock from the depot with 37670 leading for the return was a special moment, with several current and former St Blazey drivers watching with evident pleasure. Back on board and soon speeding into the now very warm and sunny afternoon.

Another high speed dash through my home station, before a quick leap at Bristol. Dashed over to the 19:53 back to Highbridge which was unusually leaving from platform 15. Strange to be covering the same track again in a much more sedate and less salubrious surroundings. New track, impressive locos and a grand day out with excellent on train service. This trip was worth the wait!