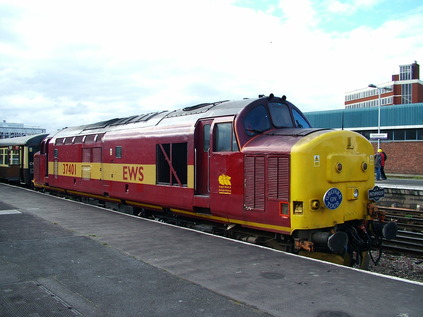 I didn't seem to have been asleep for more than a few moments when I woke. I pottered carefully around the hotel room, trying to avoid the creaky floorboards as I prepared to depart. Despite the fairly good weather yesterday, the morning was drizzly and cold, and I was amazed to see scantily dressed revellers still making their way home through the city as I trudged to the station, still aching from the exertions of the past couple of days. Arrived to find the stock for the tour already in platform 6. No sign of coffee at this early hour, so made my way down to the platform where 37401 sat at the head of a long rake of coaches. It has to be said that few tours in recent times have attracted the attention this one has prior to running. Simply proposing a pair of DBS Class 37s seems to have brought undeserved criticism for Pathfinder, and the sheer weight of (sometimes bizarre) speculation about what would show up on the day has resulted in unprecedented publicity! In the event, with 37406 not quite ready at Eastleigh (but reportedly possibly joining the train later) we set off with a single locomotive. 37401, much patched up since last appearing, was clearly up to the job and we made a thunderous exit from Nottingham. With fairly generous timings we made our way via Leicester and Nuneaton to Birmingham and then down the Lickey to Gloucester. Even at this early stage speculation was beginning about what arrangements would be made for getting back up the bank in the evening. At Gloucester, hopped out for a photograph and a chance to grab drinks, as with no buffet car in the formation due to a failure at Eastleigh and since the hot food kitchen car was producing long queues, getting coffee was proving tricky.

Patched and repaired for today, 37401 waits time at Gloucester
On leaving Gloucester we learned that there would be some slight changes to the day's itinerary due to some fairly major engineering work at Newport which meant a stop in the platform wouldn't be possible. Instead, those who didn't want the Uskmouth branch could hop off for a couple of hours break in Newport. Otherwise, we were in for a long day. By now, speeding alongside the Severn in glorious sunshine and heading for some fairly rare track it was difficult to be too concerned. Got chatting to a neighbour about track bashing and it's arcane ways as we headed into Margam. As something of a bonus we travelled much further into the complex than planned, ending up in Knuckle Yard on Line 16. Noted 60024 lurking among the ranks of wagons waiting to attach to our train and take us forward over the flyover and onto the Ogmore Vale Extension line. Not a winner for me, as it had appeared back in 2007 on The Retro Retracer, but in this age of a dwindling fleet of Class 60s, not an unwelcome sight! Reduced to freight line speeds, we made rather cautious progress past the Parc Slip site, and over the Maesteg line at Tondu. Despite the crawl along the OVE line, we were very early, and spent a fairly long layover in Garw Loop on the former Pontycymer route. 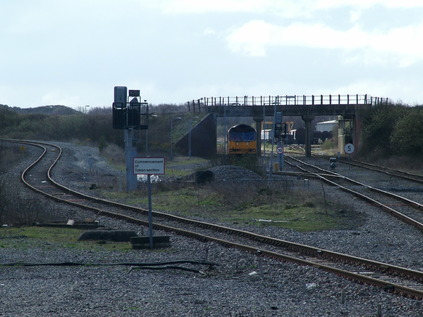 A rare view from Knuckle Yard - 60024 waits to join the train
Once underway again, we took the more familiar passenger route back to Maesteg, crossing over west of Bridgend to pass through the station on the wrong line and take the connection onto the Vale of Glamorgan line. Through Cardiff Central and back on the mainline as far as Ebbw Junction where we took the curve to Park Junction. We curved away from the Ebbw Vale branch here, and started the slow climb into the valley beside the River Rhymney. Soon reached the site of Machen Quarry, with amazing views across the countryside in the clear afternoon sunlight. Soon underway again, heading south towards Park Junction and this time taking the curve towards Gaer Junction. Once services from Newport commence, this will see passenger trains, but for now it remains very uncommon track. Soon into Newport for the briefest of stops, before heading into East Usk yard.

Despite the cancellation of our break at Newport, timings hadn't been adjusted. Thus we had plenty of time for the run down to Uskmouth. First though, 08567 was attached to the rear of the train. Whilst we were waiting, and rather unexpectedly, a trolley suddenly appeared selling drinks and snacks - it's first appearance in twelve hours of the tour, despite it's fairly regular trips through standard class. Took advantage of refreshments, and enjoyed the slow transit of the branch to Uskmouth which provided amazing views of the Transporter Bridge. Contrary to some opinions expressed on the web before the trip, we made it all the way to the gates of Fifoots Power Station before reversing, with the shunter dragging us back into East Usk for a long wait before heading back into Newport.

Again, the briefest of stops while men working on the new signal gantries looked fairly worried at the site of a large group of enthusiasts charging towards the platform end for a shot of the shunter, sadly one I didn't get the chance for. As the sun began to set, enjoyed a further run beside the Severn into Gloucester where I watched 37401 roar off into the darkness towards the Lickey, where it was expected a banking engine would be provided. Grabbed a much needed coffee just before the buffet closed for the evening and settled into the Weymouth train for a run back into Bristol among the glamourous folks heading for their night out. Not sure what they made of an exhausted, bedraggled looking character with a huge rucksack? Changed at Temple Meads and headed under the station to the Rail Replacement Bus stop. Spotted a familiar face, and enjoyed a surreal chat with Mr Solomon all the way home to Highbridge. A strange end to a varied and interesting weekend away. Quite how I'm going to explain all this when someone asks "good weekend?" at work on Monday, I'm not sure!