The idea of the 'Lost Weekend' series was born out a frustrating railtour scene this year, whereby with cheap tickets and hotel rooms booked one would find the tour cancelled at the last minute - maybe due to weather, low bookings, Network Rail prevarication or just plain old gremlins in the works. The point was, I'd end up in some corner of the country with a couple of days to explore without pressure - I could get those early trains that take unusual routes, brave branchlines with poor services I'd never normally get to, and explore without fear of getting stuck somewhere strange and inaccessible. With the superbly named 'Andover Fist' tour out of Clapham Junction postponed indefinitely, I found myself in the strange position of having a 'Lost Weekend' in the heart of London. My relationship with the city is complex at best and discussed at probably boring length in other articles. So, I decided that with a base at Clapham Junction this had to be a railway weekend, and set about covering the little twists and turns of the network I'd never normally visit.

A strangely frustrating week had left me planning routes at the very last minute. I had a vague idea of what I wanted to do, and even on the Paddington bound HST I found myself reviewing my plans. I couldn't get into the hotel until later in the day, so the idea was to get moving straight away, heading directly over to Liverpool Street to deal with a couple of bits of track left undone in the east. First, out to Stratford, languishing in the muddy birthing pool of the 2012 Olympiad and as strangely bustling and interesting as ever. The plan here was to take one of the Stansted-bound services out of the curving platforms on the extremity of the station, which used a bit of line I'd not done before. Made the train with minutes to spare and settled in to the run up to Cheshunt - familiar from getting stuck in a unit a while back. Here I had a short wait for a train to Hertford East, covering the branch into the terminus with its surprisingly extensive and impressive station buildings. It was here my route began a strange relationship with the New River, visited at it's terminus what seemed like an age ago. My wanderings would follow the river unconsciously, despite efforts to strike an almost random path across the city.

Deciding that Hertford offered little hope of refreshment or much of interest, set off south again on the same train, seeing it through to the buffers at Liverpool Street. The next stop was Moorgate - most specifically the terminal platforms used by First Capital Connect - the former Thameslink service which will soon cease to call here in the peaks to deliver commuters from Luton and St Albans into the city. As the Crossrail and Thameslink 2000 plans develop, Farringdon Station will outgrow its footprint and block access to these mysterious tunnels under Smithfield. A tiny section of track, but highly significant given my strange attraction to this area. Changed for a southbound service at Farringdon and headed south of the river to address some equally new bits of line.

After an incomprehensible argument about Oyster Cards with a member of gateline staff at London Bridge, I finally managed to get onto the concourse to rebook for my next trip. In the event, ended up back on the through platforms and able to complete my 'touching out' and thus avoid the promised penalty fare. The aim was to get to Grove Park to traverse the Bromley North branch. Almost every effort to get train times through to this branch ended up suggesting a trip to Bromley South and a walk. I'd considered this in the past myself, but instead plumped for today's run. A short but quick run through the suburbs, sighting unusual units as I went, finally piling out with a small clutch of early commuters and trekking over the rather rickety wooden footbridge to the waiting 466. Settled in, laughing at myself for choosing 'a good seat' for the ten minute run down the branch. Most of the line lies in a suburban tunnel of greenery, but I did note the sizeable plaforms at the terminus - perhaps through trains once called here more often in the peak? Back onto the unit for the run to Waterloo East, and a change for Clapham Junction with a couple of easy objectives achieved. 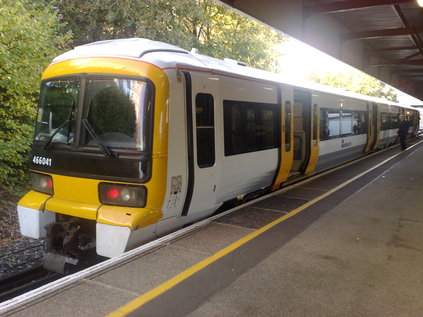 The driver changes ends of 466041 at Bromley North

Trudging out of Clapham Junction with the throng of commuters I was struck how the suburbs began so close to the city here - and despite a clear issue with the drains, the area of housing north of the station seemed quiet and well-kept, and certainly challenged the traditional view of how things are 'south of the river'. Clapham was always an exclusive address, and that was perhaps why these small somewhat unloved but seemingly decent streets had been dubbed 'Wandsworth'. On reaching York Road I realised I genuinely wasn't far from the bizarre contraption which sits atop Wandsworth's large traffic roundabout - but my hotel, just a few doors from where I stood, claimed to be in Battersea! Checked in, and found my room - a clean and safe haven in an otherwise evil smelling Travelodge. Enjoying the nightscape of Wandsworth Bridge and the growing developments of Battersea Reach, I once again ruminated on contested territory and my former subscription to the 'London Villages' theory. It was all too complicated.