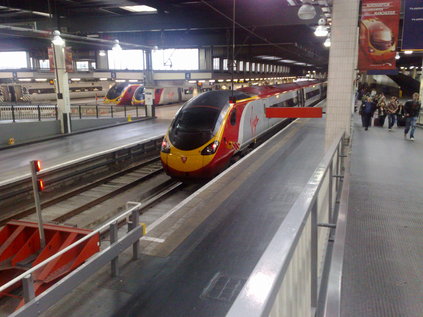 Not Quite The Last Mainline

I think, following years of what some would say was wasted time and effort, I've covered most of the mainland UK railway network. Certainly, almost all of the bits which are in regular passenger use - alongside a good deal of the parts which aren't. However, one significant bit of track remains unmarked in my atlas - and it's not some obscure freight-only byway at all. It's a fair sized chunk of high-speed electrified railway between Colwich and Stone, in effect the quickest way from London to Manchester. The problem is, it's only useful for trains between these two cities and it's not strategically placed for diverted trains elsewhere. So whilst this railway sees a fairly intensive service each day, someone tucked away down here in the south west is very unlikely to ever need it. So for my extravagant and somewhat desperately last-ditch trip this weekend I set out to cover the line. But it didn't quite work out as planned...

Started early, feeling suitably relaxed about the day ahead but rather desperate to make it count in the familiar 'end of a week off work' way. Short hop to Weston for the Voyager to Birmingham, which is a useful train again now the summer alterations are a distant memory. However, the diversions via South Wales were still in operation, so this took a little longer to get to the Midlands but provided stunning misty views across the Severn Estuary. Dozed and settled back to enjoy the early part of the day. Time to browse the shops, get coffee and generally wander around New Street station a little before heading for my next train. Despite the inconvenience and poor design, this place is oddly and comfortingly familiar to me. If I don't go this way for a little while I rather miss it, and I've spent a few Sunday mornings drinking coffee here and watching the world wake up as Saturday night's bedraggled clubbers head home. Next part of the trip is also familiar territory, via Stoke to Manchester. I've spent a fair bit of time on this line lately, and whilst it's not perhaps the most interesting trip, the promise of an arrival at Piccadilly is always pleasant. It was during this part of the trip that I realised that I was passing rather more southbound trains than I'd expect between Stone and Birmingham. This could mean only one thing - in my haste I'd miscalculated, and I wouldn't be getting my last mainline today.

The upgrade programme on the West Coast has been going on for so long, and is somewhat remote from me so I confess I do sometimes lose track of progress. Only the high profile problems at Rugby and various bits of information of railway interest really sink in. So when planning my trip and pre-booking tickets, very hastily I might add, I thought I was onto a winner with a Manchester-Euston service which called only at Stoke, Milton Keynes and Watford Junction. On any other day I would have been, but not it seems today. After a brief wander around Piccadilly, boarded my train for Euston which seemed very lightly loaded, though in fairness it was sharing customers with a Euston via Birmingham service on the adjacent platform. Settled in for the smooth and swift ride down through Staffordshire, hoping for a left turn at Stone, but of course turning right instead. Since my primary objective had failed, decided to just enjoy the trip on a bit of line I see rarely enough. The route too was interesting, and would have been more so had much of it not been covered on last Wednesday's tour! Freight lines from Portobello Junction to Bescot, then via Aston and Stechford where the mainline was regained and we sped through Coventry and Birmingham International towards London. Rugby remained a mess, seemingly having new platforms everywhere but little concourse to link them together. Soon at Euston which still retains a little of its 'mysterious big station' feel to me despite its modern appearance - perhaps because I use it less often that other London Termini?

I amaze myself with the nonchalance which I display sometimes in crossing London. Out of the station, short walk to Euston Square and into the tube. Familiar ground, walked almost unconsciously now. Part of my stomping ground when in town almost! I think of people who tell me they're nervous of making this kind of transfer, and while I can understand it perhaps I take a different view - enough is familiar in the railway world's customs and practices to make even the most challenging transfer a little easier. Except of course when I'm confronted by a flight of escalators! Off at Paddington, and aching knees dragged over the bridge and up the stairs to the mainline station. Soon on board the HST bound for Bristol - again, an almost weekly occurrence just lately.

So my last mainline remains unmarked, but I've done a huge circuit of the country and enjoyed a day on the rails. Perhaps I'm a little more reflective given the impending Birthday (which is never easy) or the fact that I'm struck by the huge amount I've travelled recently. In either case, I know that trips like this is a fantastic way to relax and get me thinking, neither of which happen nearly often enough.