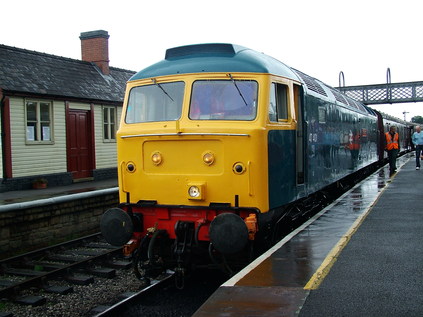 Firstly, I must apologise for the appalling title for today's entry. The exceedingly poor punning which goes on here is usually harmless, but this particularly execrable title is worse than ever.

So, after a week of rain and a predictably tiresome start to the new school year, decided to get away and do something a little different. I'd often read about a fair variety of things visiting or operating at the Midland Railway Centre in Butterley, but due to its distance from the railway network has dismissed it as out of range unless perhaps a railtour was to take the connection at Ironville sometime. However, having looked at the timetable for their Diesel Gala I was keen to try to get there. It should have been a fairly simple trip...

Things started to get interesting once on the 0730 Voyager to Derby. After turning west at Filton and calling at Patchway in lieu of Bristol Parkway, we emerged from the Severn Tunnel in a particularly drenched South Wales. Reversed at Newport and took the line via Lydney which made a scenic change. The diversion was timetabled, and we made Birmingham on time, and actually arrived at Derby fairly early. Waited a while for a platform, as the station was effectively a terminus today due to the ongoing work at Bradway Tunnel. Once out of the station, dashed to purchase a Derbyshire Wayfarer ticket and find a bus to the City Centre. Finally gave up in the general chaos of rail replacement coaches outside, and took a swift walk along the pedestrian route to Moorledge where the temporary bus station consisted of stops ranged along a busy street. Found our stop, and boarded the incoming service 9.1 which would take us directly to Butterley. Chatted a little with the driver who was keen to tell us that we could have travelled cheaper on some obscure local ticket offer. A quick whiz along the high standard dual carriageway of the A38 - which is bizarrely a continuation of the street I live on - before heading into Ripley and alighting at Butterley Station.

The weather had been fairly kind from Derby onwards, but it was incredibly wet and there were sadly very few people around. Made a dash onto 47401's train as it arrived and settled in for the short run to Hammersmith over an impressively long and low viaduct. Watched the loco run around from the dry comfort of the stock, then headed back, taking the line to it's other terminus at Riddings where the route onto National Rail metals near Pye Bridge diverges. On passing Swanwick Junction, saw the large sheds and a fair amount of stored stock. Seemed to be a fairly large, four platform station - and interesting to note 101692 waiting to head up the branch too.

47401 at a very wet Swanwick Junction

After another run around, took 47401 back to Swanwick Junction and chanced a few photographs. Goal was to head up the short quarter-of-a-mile long Swanwick Brach which had recently opened. Over the line and a chance to watch 47401 and 31108 cross before jumping onto the 101 for a run up the slippery and steeply graded branch. Its years since I've travelled on one of these units, and despite being a very short run up and back down the branch, enjoyed the noise and the chance to see the driver's eye view from behind the cab. Chance for a brief chat to the staff, before using the remaining time for a dash around the stored locos. Highlights for me were a chance to see 47401 a little close along with the resident Western and the odd sight of a West Yorkshire PTE liveried 141 - something I haven't seen for many years. Impressed with the collection of DMU cars too, and the chance to see Class 76 'Electra' in the museum, before heading back to Swanwick Junction for the service back to Butterley. The diversions today meant we only had time for a short stay, but with the countless exhibits and activities for children, it would make a great fun day out. A little sunshine soon gave way to torrents of big, fat raindrops and we soon bagged our cameras and fled for cover, confident we'd seen and photographed almost all we wanted to - despite the far from perfect conditions. 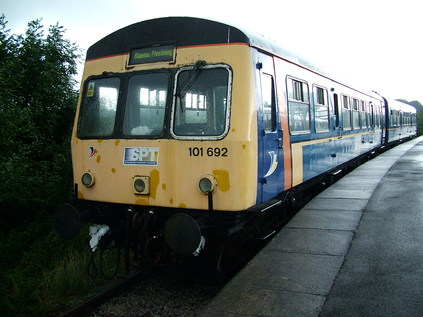 101692 prepares to head up the short but steep branch

Another easy and pleasant bus ride back, and interesting to see the driver confiscating some cider from some obviously underage drinkers. He said they could have it back when they got off. When they did so they asked menacingly if he'd drunk any and he bluffly replied "I wouldn't brush my teeth with that stuff!". We need some like him down here. Chance for a bite to eat at Derby and a chance to see 66429 hauling an incredibly long rake of coal empties into Chaddesden Sidings, presumably working for Fastline at present? Gloomy and wet once again so we got on board our Voyager which arrived very early indeed, and didn't notice 56311 sneaking into the other side of the station until it was much too late for pictures. A fairly quick and easy ride into Birmingham...

...where the fun began again. We left New Street and right away I was roused from my sleepiness as I noted we'd departed via the Stour Valley line! I predicted a diversion via Galton Junction and Smethwick Junction - and this was soon confirmed due to landslip between Birmingham and Cheltenham Spa. So some more bonus track, and a chance to swifty fly past the Severn Valley Railway at Kidderminster and see what was stored outside. Very slow going along the line down to Worcester. Watched our planned connection at Bristol slip from our grasp, and replanned a bit which sparked an interesting discussion of the service pattern here on a Saturday night where a HST ex-Paddington deputises for a local service which runs on Mondays to Fridays.

So a successful and varied day, full of surprises and with the odd bonus thrown in! I think another visit, hopefully in more clement conditions would be worthwhile.