It seems the railtour market has divided in two these days - the summer is filled with high-end trips to the Eden Project and the like, while the good old fashioned enthusiast trip is consigned to the darker days of Autumn and Winter. So it was good to find myself on the platform at Crewe in near daylight this morning for an early start to what promised to be an interesting day. There had been much speculation about which of the dwindling fleet of EWS Class 37/4s would be capable of hauling our train today, and as it turned out 37401 and 37417 has the honour. The outsider bet of recently returned to service 37670 being due out of repair on Monday. Despite looking fairly tired, both locos sounded fine. Particularly good to see 417 again - which I remember chasing around South Wales on the day of it's naming. It's been a stalwart of railtours these past few months, and it's good to see it returned to service again.

Firstly, after an on time departure we made a dash down the West Coast Main Line to pick-ups at Stafford, Wolverhampton and Birmingham New Street. The timings didn't seem to stretch the locos, and we were consistently early. Out of New Street and a further pick-up at Coleshill Parkway - the first time I've called at this new station. Via Whitacre Junction now, we headed northwards again to call at Burton-on-Trent, before taking the freight-only line from Stenson to Sheet Stores Junction - as covered rather unexpectedly on the Sunday of an All Line Rover a few years back! After negotiating the tangle of junctions at Trent, via Loughborough and Syston - taking the North to East curve - and onwards towards Melton Mowbray.

This isn't a favourite stretch of line for me, but its one I rarely visit. In the brightening morning, the views were pleasant enough - particularly around the attractive town of Stamford. Also recalled much from Iain Sinclair's Edge of the Orison which digs deeply into the topography of this area. We swung into line with the East Coast Main Line at Helpston, running parallel to Peterborough where a fair few locos were on the shed. Much surprise and delight from the normals to see a 'proper train' in the station! Still in Sinclair's orbit we departed via Whittlesea (to coin the railway spelling of the town's name rather than the more accepted -sey ending) and soon enjoyed stunning views across the fens to Ely.

Passing Ely slowly we seemed to slip into the gravity of London, as we waited at Cambridge for a few city-bound services to depart before we took the Liverpool Street lines, once again drifting into the countryside as we passed provincial Bishops Stortford and Harlow, where we managed a brief leg-stretch in the warm Spring sun. Soon back on the train, and passing through the mess of works which make up the Olympic site in the Lea Valley, to Temple Mills where we waited for the leading locomotive to run around to the rear beside the new Eurostar depot. 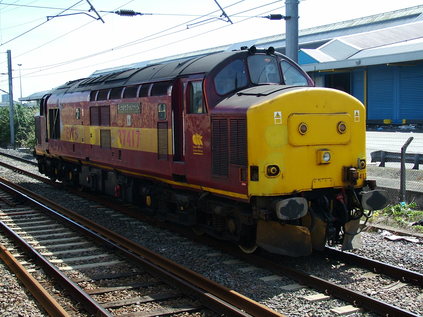 37417 runs around the train at Temple Mills

From here, it was just a short hop to Fenchurch Street, but it involved a bit of track I'd wanted to cover for a long time. The line from Bow Junction to Gas Factory Junction links the lines from Liverpool Street to those from Fenchurch Street, and is one of the few connections remaining from the former London, Tilbury & Southend Railway into the wider network. This link sees empty stock and the odd diversion, and as I recall used to see an absurdly early or late working to retain driver knowledge. I always wondered how I'd ever cover it - so today was a treat. As we screeched around the rusty curve, the train came to a halt at a signal allow access to the mainline near Limehouse. The residents are obviously resigned to the line having very few trains, as one of them was enjoying the midday sun topless on her roof. Credit to her, after a brief moment of surprise at the sight of a train full of frothing track-bashers she simply positioned a towel judiciously and carried on enjoying the rays! We were soon on the move, and arrived at the unlikely railtour destination of Fenchurch Street. This odd little station is such a strange backwater at weekends, in a prime City location it's business is done mostly in the weekday peak - and it seems eerily quiet despite the presence of two noisy locomotives. A dash for refreshments and pictures, and a young lady is heard to say to her boyfriend "Why are they taking pictures of those trains?". He thoughtfully replied "Because they're perverts". I can't quite summon the energy to complain at his lazy thinking, or defend my fellow gricers, bashers, frothers and friends. Needless to say, perversion - whatever that actually is in 21st century society - occurs at pretty much similar rates in the enthusiast population as it does in the wider world. If the perpetrator of this odd remark is reading, then "Yes, I was looking at your girlfriend!". Does that make me a pervert? I wonder! 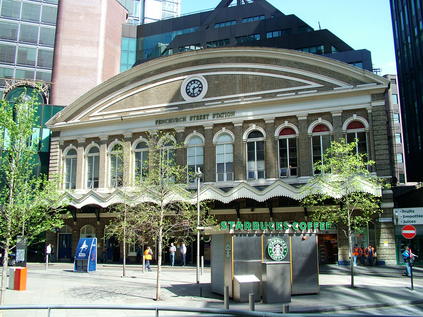 After a wander out into the city, just to see the area in wonderful sunlight after a long period of not visiting, I rejoined the train for the run out through more Sinclair-infested country. Through sinister Purfleet, marshes and container ports enclosing the line, to Tilbury - the once important Riverside station still visible but barred by gates - we speculated about the chances of Gas Hill and the BLS effecting entry sometime? A little short of Stanford-le-Hope we curved to the right and took the branch to Thameshaven. A slow, trudge though the marshes, almost like we were being dragged back by the humid, fly-infested air we crawled along. The huge gas plant dominated the view to the north, while the estuary and it's ships filled the windows on the southern side. Eventually we crept around a sharp curve, passed by the signaller's cabin and entered the traffic centre. All was silent, some derelict gas tanks and a few discarded Channel Tunnel wagons all the evidence of this soon to be redeveloped port. Another run around, and again time to move on and leave the marshes to their silence. 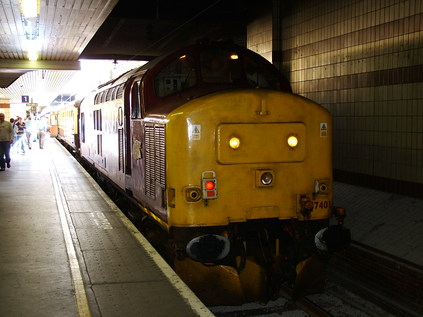 37401 prior to departure for Thameshaven

A familiar swing across North London took us homeward, leaving the Gospel Oak line at Canonbury as on a recent tour, and traversing the Hertford loop. Our lateness due to the slow traversal of the Thameshaven branch was compounded by a broken down train, but we were soon underway and heading for Peterborough once again. Our timings had been good all day, and this was really the only significant delay. Chatted a great deal with a gentleman who'd had a similar career to me, which passed the time as dusk fell over our route back to the Midlands. Bailed at New Street, mere minutes after the train to Redditch and had to wait half-an-hour. Time to amuse myself by watching the local drunks stumbling dangerously around the platforms. A fine day out, some interesting track and another stirling performance by the 37s.