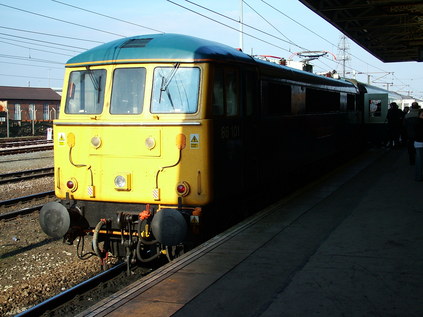 The Road to Hull

An unintentionally deceptive article today, given we had no intention of going to Hull at all, and in fact got nowhere near it! I'd been thinking of today's trip for a while - certainly since the disaster with the Class 87 Farewell tour cost me a good few miles behind an electric loco. Despite having had 86101 on more traditional territory at the end of last year, something about Hull Trains' audacious plan to hire in the Cargo D rake of blue and grey stock and put the 86 on one end appealed, and I found myself booking a couple of us onto today's train. A very early start today, just like the old days! Walked to the station in freezing conditions and caught the first train of the day as far as Weston. The first real challenge was getting to Kings Cross on time though. With the mainline to Paddington closed, we travelled via the Berks and Hants. As ever on this route, the early morning sun bought the mists down around us, and we sped through agreeable views of hazy Wiltshire countryside. Initially we made good time, but a couple of frustrating checks between Reading and Paddington made for nothing better than an on-time arrival or thereabouts. From there, a dash onto the Circle Line and a frustratingly slow creep around to Kings Cross. We arrived about 12 minutes before departure was due. However, 86101 didn't.

We used the delay well enough, buying breakfast and checking out the rest of the action Kings Cross. A fair few cranks in evidence for the trip and numerous photographers out, annoying the Network Rail staff! It seemed that the DVT on the set had suffered a damaged headlamp, but it was on route and we just had to wait. As soon as the stock arrived we grabbed a seat - a sensible policy in fact as once the train was announced the tide of people pouring on began to cause problems. No reservation tickets meant lots of squabbles, and we found ourselves near to one young mum who was almost hyperventilating with fear at the need to change at Doncaster today and the fact it wasn't a proper 'Hull Train' - their Pioneer units have clearly won some fans. Hull Trains, previously paragons of good service in my experience, rather let themselves down on the information front today - and it can't help having the company named after the destination. The question "Is the the Hull train?" being followed up with "Well why is it only going to Doncaster then?".

Soon off, about 30 down and proceeding well until a further stop just outside Kings Cross. We plodded on along the Up Fast until we came to a halt south of New Barnet. A failed train was blocking the line and we'd need to reverse. Quite how we'd managed to get signalled behind the troubled service when other National Express service were diverted onto the slow lines and whizzing past at a fair whack was beyond me. Must say, the reversal to Wood Green South and the run past the stricken 91128 and her glum looking passengers was accomplished quickly and without undue delay. However we now found ourselves just over an hour down. From here though, running was very swift and we had a really fine trip through bright sunshine towards Doncaster. 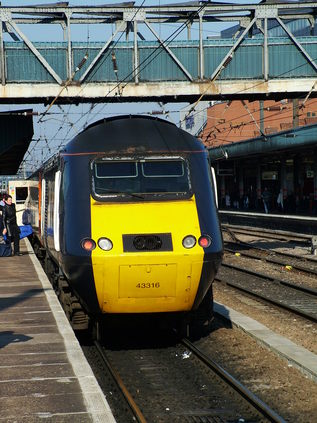 Spent a frustrating time at Doncaster. Despite the cold, the weather was wonderful and it was pleasant to wander the platforms watching goings on with our set moving to the yard to lay over and a mostly HST service working on the East Coast. However, photography was near impossible due to the low winter sun - but if it had gone in, it would have been far too dark. I suppose it's difficult to win in the British winter. Settled on a chance to wander, eat and drink coffee while the world went by. All too soon it was time to head for the platform for our Crosscountry service back to Bristol. 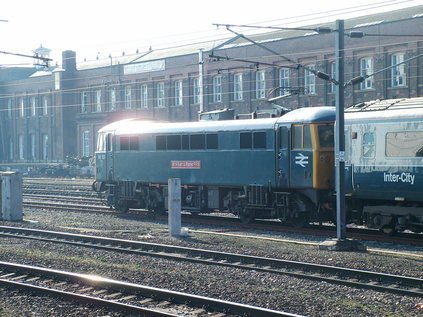 Amazingly, the service was on time and we had a quiet run back in First Class via Sheffield and Birmingham. I wasn't alone in noting that a complicated day out which could have fallen at the first hurdle had actually worked out rather well despite Hull Trains and Network Rail's best efforts to cock things up spectacularly. Another early arrival at Bristol and a short wait for the unit home. Lots of miles, some very unusual crossovers and a morning spent with 86101. A good old fashioned day out.